My name is Rosemary Baptista and I'm the founder and host of the Weekly Mosaic.  This show was birthed in 2009 and placed in Hiatus during my professional and educational pursuits in Vancouver British, Columbia.   I had the privilege, honour and blessing of facilitating classes for the University of British Columbia Indigenous Health and attained a Certificate from the University of Victoria to facilitate worshops as a Program Leader following the Stanford University model, of Chronic Pain and Self-Management and Depression.  Working with the First Nations and Metis Nations, and representing my indigenous roots as the Treasurer for the Pacific Association of First Nations Women was the most gratifying experience. I also had the great pleasure of meeting and sitting at the table of Louis Riel's great-niece. Director of Health in Victoria  and great-nephew a renowned politician.

I have been blessed with the privilege of living in some of Canada's major cities, Toronto, Montreal, and Vancouver.   Toronto being Canada's largest city, the fourth largest in North America, and home to a diverse population of about 2.8 million people was the city where I spent most time after leaving Hamilton in 1997 in pursuit of professional and educational accomplishments and where I truly learnt about cultural sensitivity, became in touch with my own roots, and was thus able to great a healthy fusion of the the cultures that are part of my own DNA, which is the personification of MOSAIC.  Every cell in my body is a representation of different faiths and cultures.

Through these national relocations, I came to realize that I was experiencing a cultural shock and faced challenges in adjusting and adapting to the geography. So, I could only imagine the challenges that newcomers to any country face, and this was a moment of enlightenment.  Although language  a great barrier, there are many other challenges during the settlement process; feeling a stranger in a strange land,  housing and employment issues, inexperience with different customs and laws, discrimination, uncertainty about the integrity of the justice system and unfamiliarity with geographic regions and their climate

Being a Canadian for me is a choice and a privilege just as it is a choice to make Hamilton my home.  I returned to Hamilton last August 2009, full of energy and feeling very enthusiastic about  contributing positively to the growth of this municipality and share what I had learnt through my journey across Canada - from Newfoundland to British Columbia.  Hamilton is a diamond in the rough:  the trails, nature, escarpment, univeristy town.  Toronto lives up to it's definiton "the meeting place, it introduced me to multiculturalism at different levels of government, the University Health Network umbrella and The Toronto Police Services, which I was a proud, committed and dedicated member of the Coalition Team, and helped me become more tolerant and sensitive.  I can truly say, that I earned my PHD as a Humanitarian in the City of Toronto.

Toronto's rich multicultural diversity is expressed by the more than 200 distinct ethnic origins residents identified in their response to the 2006 Census. 49.9% of the population of Toronto is foreign born.

During my career in aviation, I travelled across Canada and spent vast majority of time flying in the province of Quebec and  the maritime provinces.

In my personal opinion, Hamilton is indeed the "Best Kept Secret" and a "Diamond in the Rough".

I created the Weekly Mosaic as a tribute to the Honourable Sheila Copps known as one of Canada’s foremost female politicians, and a prominent figure in Canadian public life for almost 35 years. Known for being feisty and tough, she was born and raised in Hamilton, Ontario. Sheila entered politics in 1981 by becoming the first Liberal in over 50 years to represent the provincial riding of Hamilton Centre. In 1984, she was elected Member of Parliament for the riding of Hamilton East and was re-elected in five successive elections.

Sheila was the first woman to ever hold the position of Deputy Prime Minister and served for ten years in the federal cabinet, both as Minister of the Environment and Minister of Canadian Heritage. From her work on diversity and inclusion, to protection of the environment, to support for young Canadians and women, Sheila has had a storied career and left an indelible mark on Canadian public policy.

Among her achievements, she brought forward what was the strongest federal environmental assessment legislation in the world; established Young Canada Works to provide annual summer employment for youth; brought in copyright protection for Canadian recording artists; and led ministers of culture from over 50 nations in the development of the first ever International Network on Cultural Diversity.

Sheila earned a Bachelor of Arts (Honours) in French and English from the University of Western Ontario in London, and pursued further studies at McMaster University in Hamilton and the University of Rouen in France. In 1998, she received an Honourary Doctorate in Law from Université Sainte-Anne in Nova Scotia in recognition of her efforts to promote bilingualism and her commitment to advancing the French language and culture in Canada.

In recent years, Sheila has been working both in French and English as a journalist, broadcaster, and political commentator. She is the author of two books, Nobody’s Baby and Worth Fighting For, she is currently residing in Ottawa with her husband, Austin Thorne. Together, the couple has four children and four grandchildren.

The intention of my show is to take the friendly and personable approach to form an exchange between our diverse and ethnic communities to assist in creating healthy and bonding friendships.  At the same time its focus is also to promote the work of accomplished artists as well as those that are beginning in their career.  Share talents, educate about the Canadian system, create a forum for discussion of different topics and just have fun!    This socializing will eventually create fusion in music, food, arts, etc. I feel that fusion is indeed the synonym for integration.

This will be a variety show full of fun, enjoyment, and sharing.   Special Guests will be invited from different nations and communities.  Love and any act of therefore speak louder than words.  The intention of having a voice on this radio is to use universal language to create effective communication and peace.

The Weekly Mosaic is a tool used to preserved, and promote Canadian Culture and Heritage, educate Canadians about other cultures and cultural sensitivity and welcome newcomers to their new home Canada - and every nation make up the fabric of our nation.  The Weekly Mosaic provides a voice and encourages the  members of every nation to share their culture, music, customs, faith with their adopted country and new family.  Welcome friends!  Blessings! 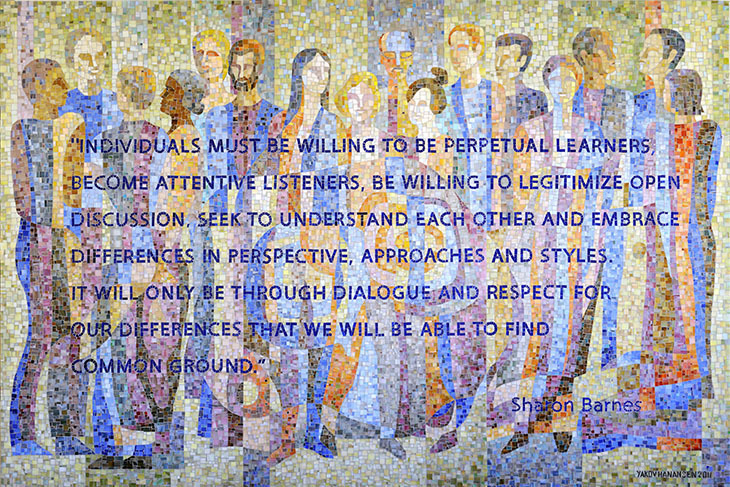 Please allow 15-30 seconds for tweets to appear in the timeline.