Leave Luck To Us 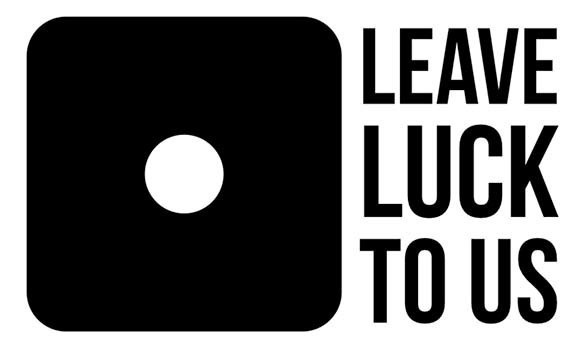 June 6, 2022 Blog Post.  ​International Tabletop Game Day is observed on the first Saturday in June which fell on June 4th this year.  Tabletop games are games played on a table and include games played with cards, dice, paper and pencil, miniatures, maps, and tokens.

Tabletop gaming dates to at least 3500BCE. Senet, Backgammon and Go are among the oldest games still being played today, but in the 20th Century, board gaming, fueled by cheap printing, cardstock, and newly minted leisure time, had a new beginning.  In 1903, Elizabeth Magie’s The Landlord’s Game (appropriated by Charles Darrow as Monopoly in 1935) kicked off a broader interest in board games.  For the next few decades board games were often roll and move games with paper money and player elimination.

Gary Gygax made waves in 1974 when he released the first commercially available role playing game: Dungeons and Dragons.  Instead of a board, the game was played in the theatre of the mind directed by a referee who ran the adventure and applied the rules set forth in the Player’s Handbook. 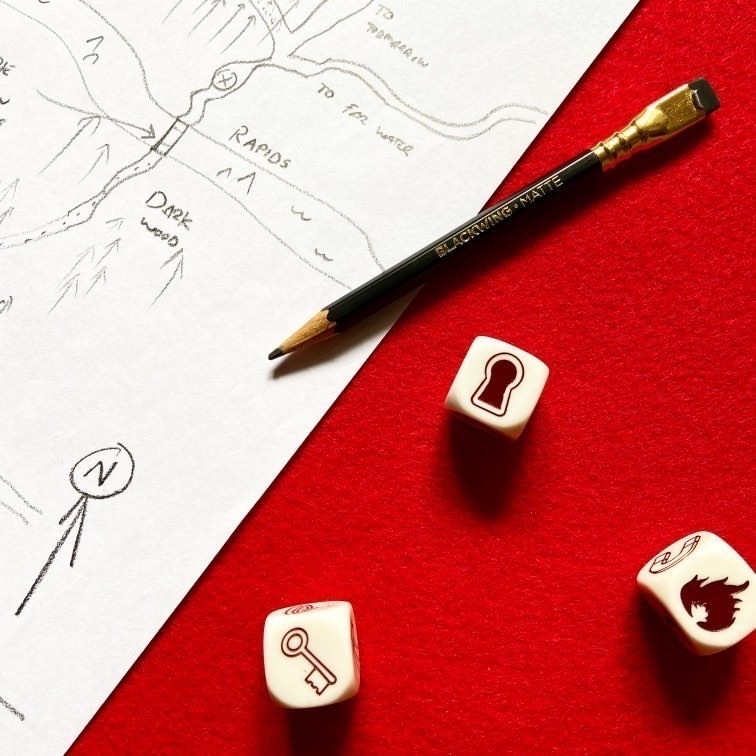 A watershed moment happened when the family friendly strategy game Settlers of Catan introduced Euro style gaming to North America and gamers haven’t looked back. What followed was an explosion of new titles and reprints of popular European games. Today, Boardgamegeek.com—a boardgame database--lists tens of thousands of tabletop games.

If you’re interested in tabletop gaming and want to explore the hobby without wading through thousands of titles then try one of these gateway games that can serve as an entry into the hobby.  They’re easy to learn, easy to find, and aren’t a huge time commitment to play. Start here and cultivate a love of cardboard. 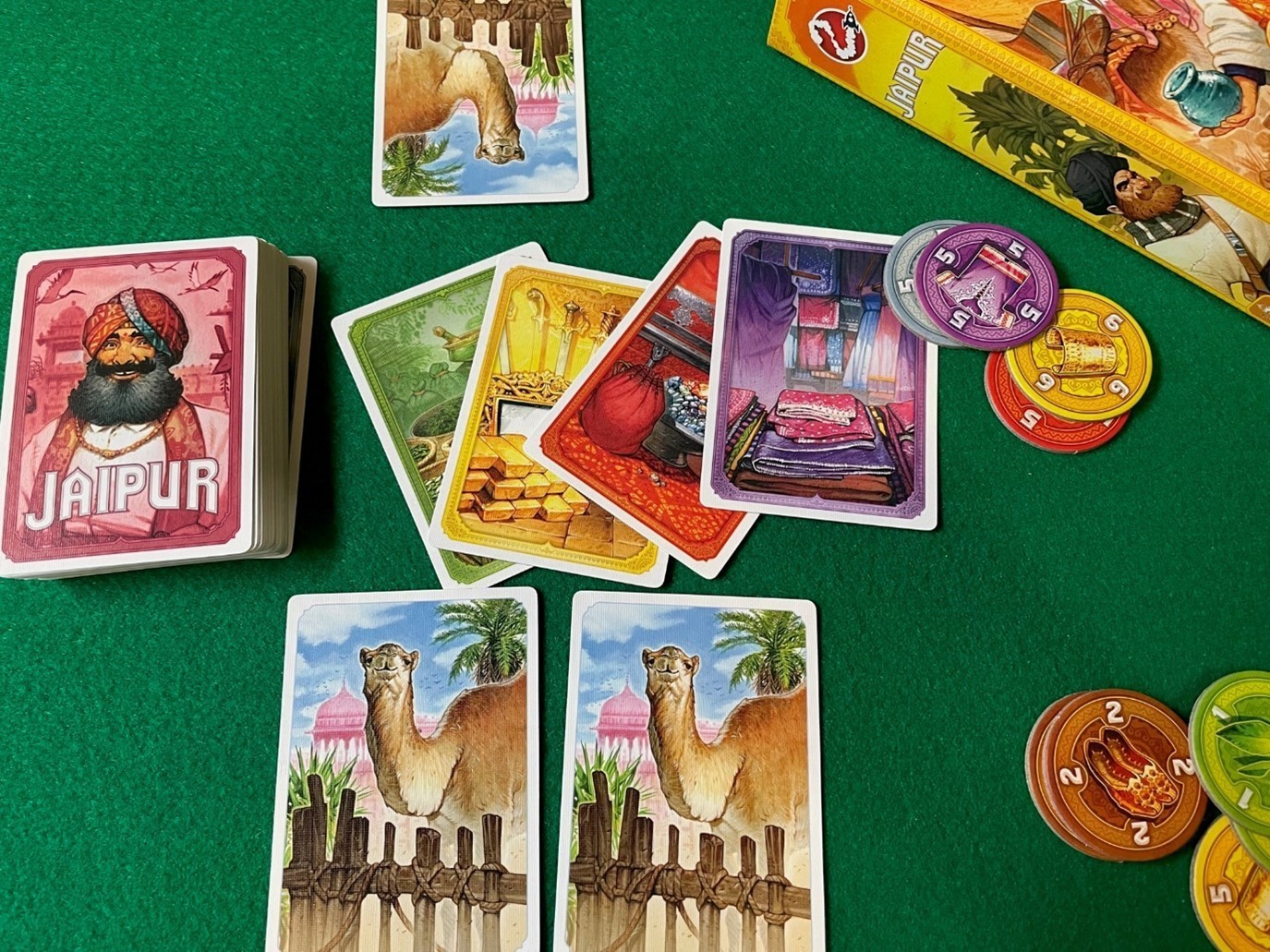 Trade goods in the bazaar in Jaipur.  Image by F. Coruzzi

For 2 Or More Players

Want to try a game before you buy? Visit a board game café!  You can visit The Bard and Bear on James St. N in Hamilton; they have many of the games listed above that you can play for a small cover charge. 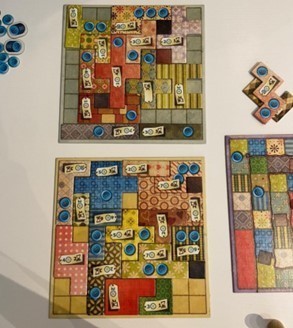 So grab some friends, some snacks, your dice, and have fun!

Listen to Leave Luck To Us—Hamilton’s tabletop gaming podcast--on CFMU every Saturday at 7pm.  You can hear us chat about tabletop gaming and play a roleplaying adventure called The Forgotten Shrine of the Slime Toad. 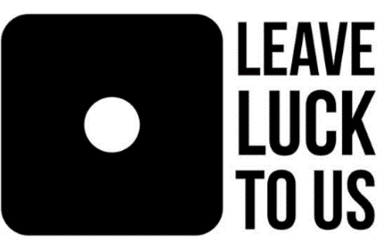 The Forgotten Shrine of the Slime Toad 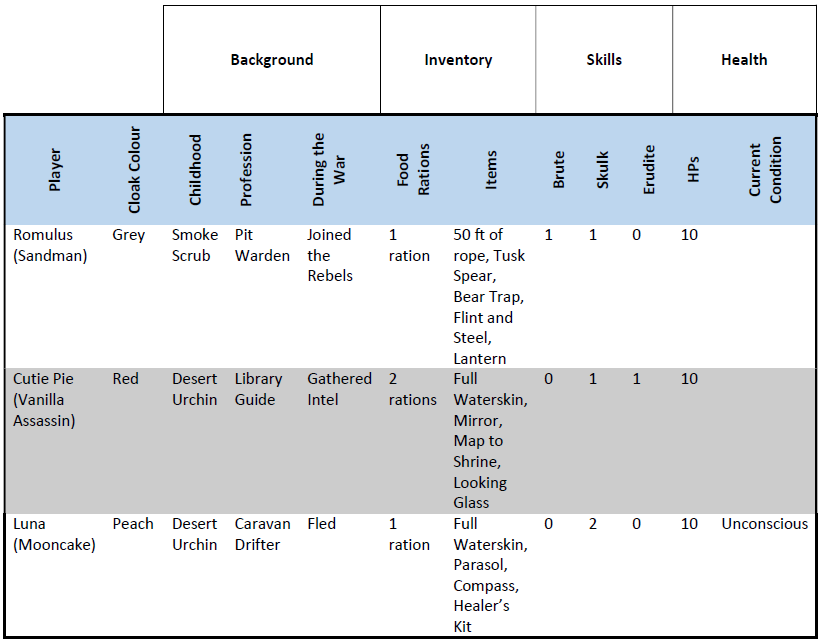 Check out our setting calendar here.

​May 21 Session 4 Recap.  The Party Explores the Shrine

Luna fainted in the ankle deep water.   A plan to suspend Luna above the water with a rope wasn’t feasible.  They decided to let her lay there for a moment.  Cutie Pie shows Romulus Grint’s note and Romulus tries o decipher it.  Cutie Pie reveals that he was able to read it the entire time.  He claims it says “Ring Bell.”  He’s insistent that they ring it but the rusty bell is high and heavy.  There is a rusted clapper in the middle of it.  They tried to move the bell itself but grabbing the edge of it with their fingertips (the bottom edge is about 6 feet from the ground). They leave the bell alone and re-check the anomaly on the west wall they found but couldn’t learn anything new.  They decide to open the west door.  A rope is tied around Cutie Pie’s waist as a safety harness.  Through the door they find another chamber with ten fat, fist-sized flies and what appears to be a pit in the floor.  Cutie Pie is pulled back out of the room and they close the door. They discuss killing the flies but decide against it.  Instead, they want to try and find the wraiths and go through the north door with a rope tied around Romulus’ waist this time and he takes the lantern from Cutie Pie. They find a corridor with 3 more doors. They move Luna into the hallway where it’s dry and reorganize.  They decide to open the left (west) door together.  They see a table and six toad wraiths preparing meals of frogs and flies on rusted platters.  They pour slime over each platter.  The boys go back out to the hallway to check Luna’s inventory.  Cutie Pie ponders going back and jumping into the pit using the parasol as a parachute.  Romulus has an idea to use Cutie Pie’s mirror to attack the wraiths by showing them their own reflections.  They go back into the room. Cutie Pie takes the mirror and points the mirror at the wraiths but the wraiths don’t react.  Cutie Pie then calls to the closest wraith and it turns, screams, and swipes at Cutie Pie but two wraiths gurgle some strange words and the attacking wraith turns back.  They both move to the table and the wraiths carry on preparing the food.  Cutie Pie asks for a platter but is ignored.  They notice that there are six wraiths but a dozen platters.  Cutie Pie considers stealing one.  He grabs at one but a wraith attacks Cutie Pie.  Luckily the attack missed.  Cutie Pie realizes he has no way to fight back and the session ended! 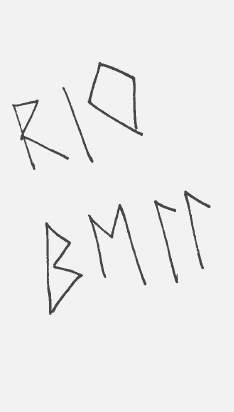 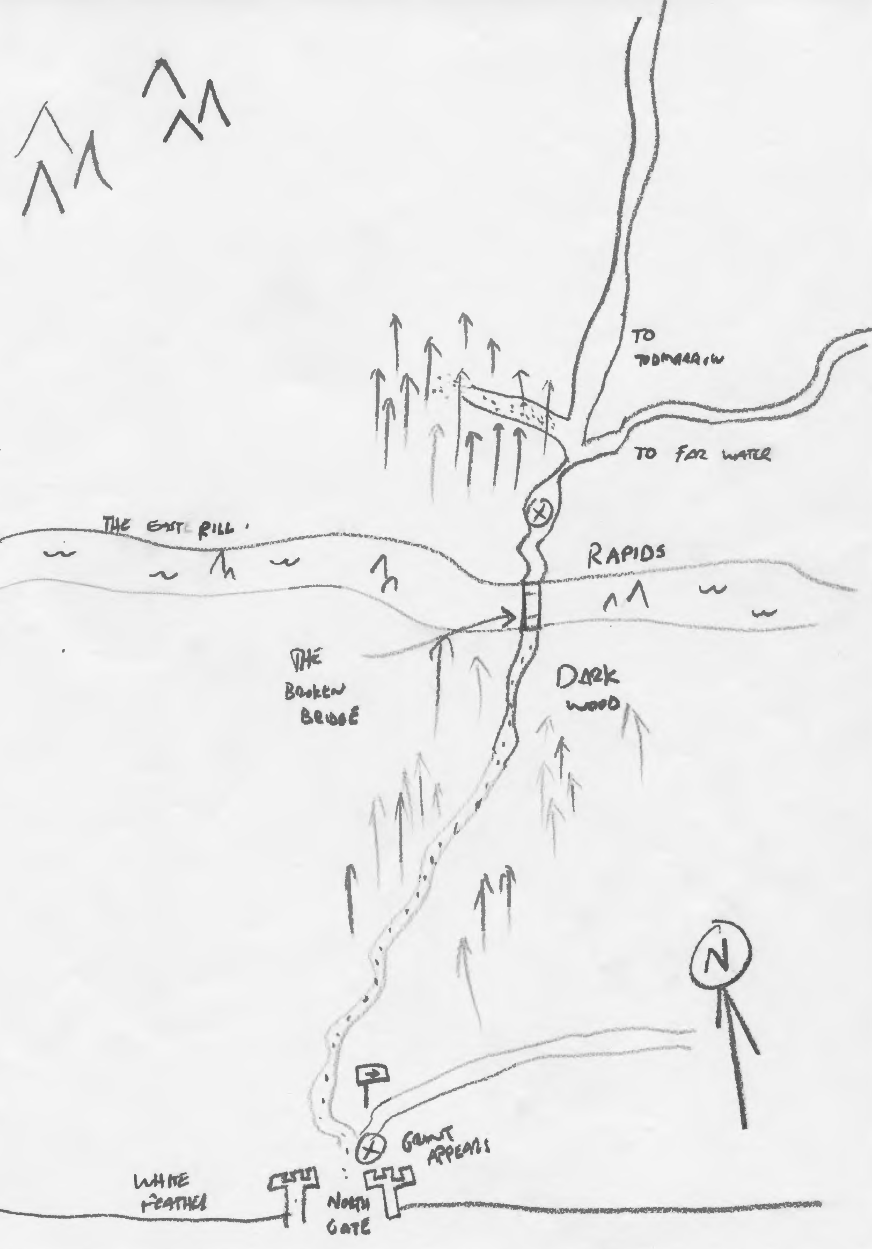 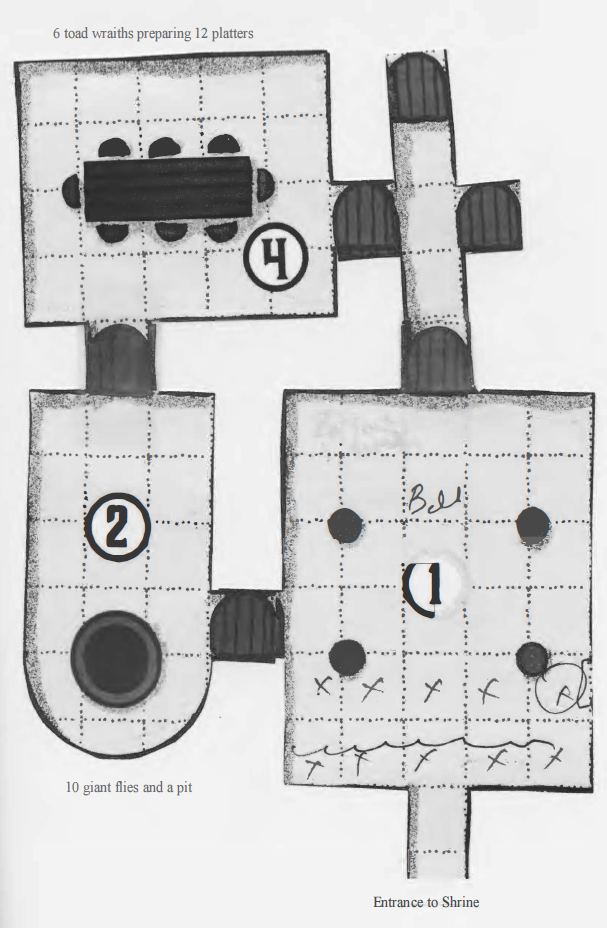 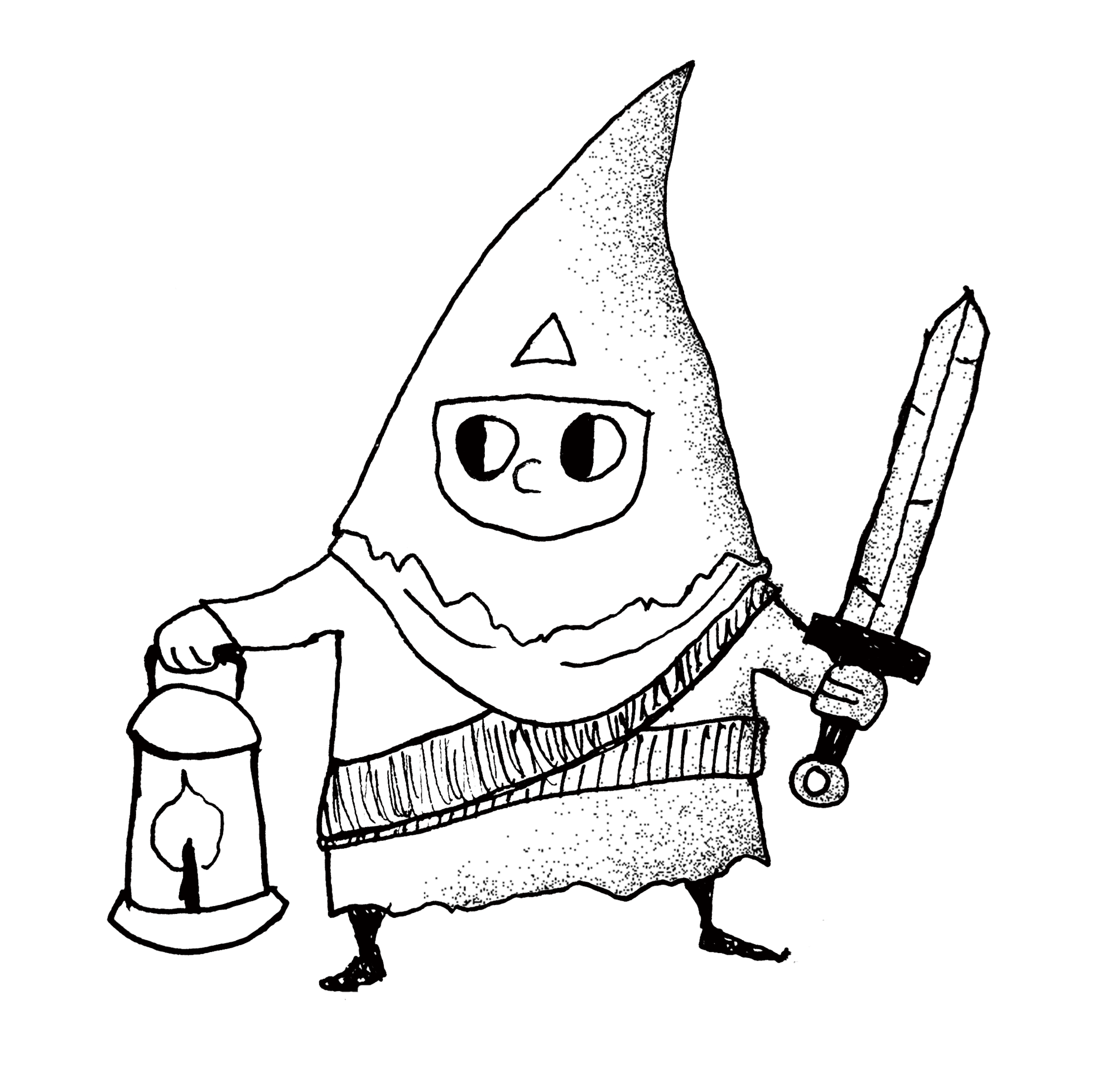 May 15 Session 3 Recap: The Party arrives at the Forgotten Shrine of the Slime Toad

Luna and Cutie Pie pressed on towards the shrine.  Through the woods they reached the edge of a massive swamp.  Miles into the swamp they considered turning back because the slog was so difficult.  They found a doorway with a frog carved above it.  They had found the shrine.  They looked through the door but the room extended into darkness . They wanted to light a lantern but realized they didn’t have a way to light it.  A plan to use sticks failed since all the swamp wood was waterlogged.  A little bit of light illuminated the first steps into the chamber.  They saw cobblestones submerged under ankle deep water.  In the water they saw hundreds of swimming tadpoles and frogs. Luna considered entering parasol first as a makeshift shield but they decided to hurl a mud ball into the room first.  The mud ball splashed aways away.  The splash elicited a “Hello!” from the darkness.  It was Romulus!  Romulus  reached the shrine before the other two and bravely decided to step inside to see if he could find anything.  Now that the three were reunited Romulus was able to light Cutie Pie’s lantern with his flint and steel.  Emboldened, they entered the flooded room and could see a rusted bell hanging from the ceiling, four stone pillars, stone walls, a door to the north and one to the west.  They also saw two albino toad wraiths in the northwest corner of the room gathering toads in wicker baskets.  The wraiths, occupied by their task, paid them no mind.  The team used Romulus’ tusk spear to check the south end of the room for pit traps but found none.

They also searched the nearby walls and found an oddity in the west wall but couldn’t determine what it might be.  They considered fighting the wraiths but Romulus suggested giving them what they were looking for (toads) in an attempt to gain their favor.  Everyone started grabbing at the fattest toads they could see but only Cutie Pie was able to catch any with an impressive nine toads.  Luna, the sneakiest, was tasked with delivering the toads gathered in her cloak.  She quietly approached the wraiths who slowly and loosed an unholy screech!  Their long fingers snatched the toads, added them to their baskets, and disappeared through the north door.

Cutie Pie and Luna are at the Moldy Unicorn.  Romulus went missing from the bar!  They’re not sure if he went on ahead or if he went back home to get something or he just got went home and passed out.  They went back to Grint to see if he might come with him but they were unable to talk him into it.  Grint reminded him of his cut and seemed to be more interested in his drinks than adventuring.  Cutie Pie and Luna decide to press on in case Romulus is up ahead; besides he might catch up with them since he did see the map to the shrine.

The Party made it to the north wall of White Feather and went through an unmanned and little used gate into the woods where they found a pathway.  Before they took a step onto the path, Grint ran up—out of breath—and gave Cutie Pie a note.  He said it was a message he found scrawled in a margin of a book on the Shrine.  Cutie Pie, Grint, and Luna couldn’t read the runes since it’s an ancient and long dead language.

The two set out, lantern extinguished so as not to attract any unwanted attention.  A few miles of feeling around in the dark, Cutie Pie and Luna find a bridge with the middle planks missing.  There was a two inch railing on either side of the bridge still intact. The bridge was over very fast and rocky rapids.

Luna tried to find another way across but gave up after sinking into the mud.

Despite the gap in the bridge appearing to be too far to jump, Cutie Pie takes a running leap and ends up hanging from the far side by his fingertips.  Luna, decides to try and walk across the railing as carefully as she can and makes it to the other side where she pulls Cutie Pie up.  No one thought to check the woods for a log or branches to try and repair the bridge but nevertheless they made it and are feeling confident.  Still no sign of Romulus but the sun will be up in a few hours.

Please allow 15-30 seconds for tweets to appear in the timeline.