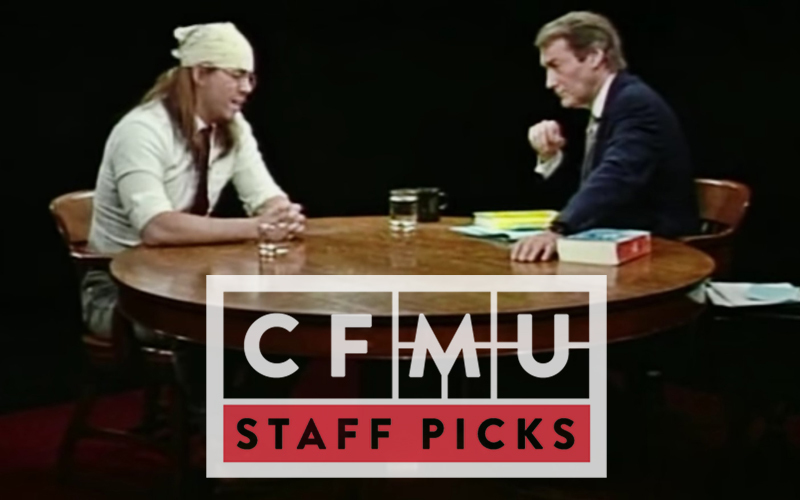 After publishing my first novel, I decided to blend my radio life with my writing life and produce a literature program. As the host of the snappily-titled Get Lit, I try to make sure I have at least a little knowledge about what’s happening in the literary world. If someone talks about the UBC letter scandal or Jonathan Franzen being grumpy, I should have some clue what they’re talking about.

It’s easy to stay informed in 2017. In the dark ages – i.e. before the Internet – I wasn’t quite so educated. Somehow I missed the rise of the genius messiah of fiction (their words, not mine) known as David Foster Wallace.

Had I heard all that hyperbole, I might have put off reading him forever. However, I read 1996’s The Infinite Jest, in about 2006. Oblivious to DFW’s legacy, I was able to enjoy the work on its own terms.

As far as I’m concerned, DFW’s pal Dave Eggers summed up The Infinite Jest with a book title of his own – it really is a heartbreaking work of staggering genius. I read the novel with something approaching reverence at first, but then it morphed into a more difficult, challenging relationship between book and reader. I didn’t love all of it – in fact, large chunks of it left me cold and utterly confused. I disliked where it headed in its final hundred pages, only resigning myself to it when I realized he wasn’t going back.

Let’s put it this way – Infinite Jest is a book I admire greatly and love. Even the chapters that pain me to read are amazing. Yet it’s a book I can’t casually recommend to others. Depending on who you are, it either brought the novel back from the brink of extinction, or it embodied everything that was wrong with this new ‘post-modern’ form of writing.

Wallace took his own life in 2008. Since then, I’ve watched many interviews with the man, but my favourite is this clip of DFW and Charlie Rose from 1997. Wallace had just released his collection of articles and essays called A Supposedly Fun Thing I’ll Never Do Again (which is a book I can recommend unreservedly).

Part of the interview’s appeal is, of course, Rose, who tries to assuage the author’s discomfort by telling him directly, “What we’re trying to do here is just understand you by talking about things other than your work.”

Some people say Wallace was a soft-spoken, big-hearted genius. That’s certainly the portrait painted by the film The End of the Tour, in which he was played perfectly well by Jason Segal. Yet that same film prompted others to suggest that, no, he wasn’t all that nice a guy, and his sainthood is undeserved.

This interview interests me not because it suggests one of the two opinions is true. It’s interesting because it gives me absolutely no insight at all into whether or not he’s the sweetest fella or actually kind of a dick.  Here, DFW is occasionally pretentious, yet very concerned about sounding pretentious. Sporting his trademark bandana, Wallace grimaces dramatically at times – it looks more like a facial tick – as if deciding, in real time, that he regrets his answers. He worries about sounding mean, yet says nothing particularly cruel. He’s awkward yet smug, uncomfortable yet well-spoken, guarded at times, unguarded at others. He is a shy library nerd and a literary showboat at the same time.

In other words, he is in many ways no different than the rest of us. It’s clear, listening to him, that he’s absurdly intelligent – but other than that, he’s just a person. It’s a pleasure to watch him talk about David Lynch and the movie Shine, because he’s so thoughtful and erudite. Yet it’s also oddly comforting, as an artist, to watch him struggle, uncertain how he wants to sound, how others want him to sound, or whether either of those even matter.