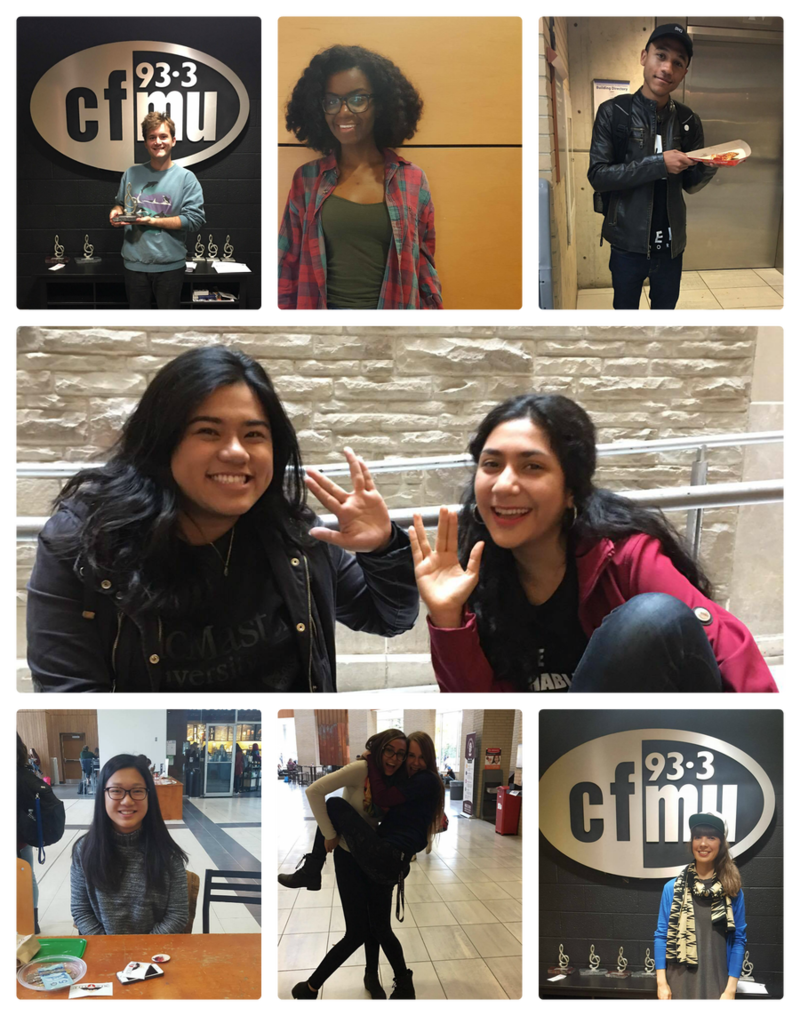 So...What Is McMaster Listening To?

The book Sex, Genes & Rock ’n’ Roll: How Evolution Has Shaped the Modern World features a study by Steve Janssen of the University of Amsterdam which found that the bands and songs that individual's listen to from the age of 16 to 21 is the music that they recall most clearly and fondly during their middle age. Janssen also found that the songs that we listen to are associated with our experiences as young adults. In the same way, many McMaster students are forming their most intimate relationships with music right now. So the CFMU promotions team went on campus to take a snapshot of its student's musical preferences!

First, we asked I Heart Hamilton host Kristen Archer what local musicians should be on our radar. She told us to check out the Hamilton band PERSONS new music video, Persons for the People. Another local act you definitely want to look out for is Jennifer Budd. You can check her out at Mills Hardware on November 12th, and if you're lucky she'll play her catchy new single Don't Even. On a less local note,  Kristen said that she is loving the new July Talk album - a Toronto band known for their vocal dynamics and for their one of a kind live performance. Check out a live version of a song off their new album Touch, My Neck. Another great alternative band from Toronto is The Balconies, Kristen says to check out their new single, RHONDA.

Another local act you definitely want to look out for is Jennifer Budd...

We asked Kurt, a CFMU volunteer, what we would find in his recently added on iTunes. He told us he is really liking the band Japanese Breakfast - an Indie Rock band from Philadelphia.Their up and coming song In Heaven is worth a listen. He also told us about a Canadian band from Fredericton called Laps. You can watch a live performance of Laps at The Recordery, or you can hear more of them on their Bandcamp.

Another interesting McMaster student we ran into was Kayonne. She listens to a lot of Dancehall music and Jamaican Reggae. Chronixx is a Jamaican Reggae artist, he brands his music as "Jamaican Revival", and Kayonne's pick is his song Smile Jamaica. Her favourite Dancehall songs are currently  Dexta Daps - 7Eleven and Vybz Kartel - Fever.

Thomas is a first year Health Science major who we found with earphones in and was kind enough to share his "now playing". He was listening to a popular K-pop song, Big Bang - Loser. Thomas likes everything from K-Pop to classic rock. His current pick for classic rock is a less popular song by The Beatles called When I'm Sixty Four.

Grant is in third year Multimedia. Right now, he can't stop listening to Frank Ocean's new album Blonde, and his song of choice is Ivy. His local choice is Pious Youth - Cherry Blossom. Pious Youth describes themselves as "Cold and unforgiving darkwave from the depths of Hamilton. DIY. Experimental". Grant's pick for underground hip-hop is Busdriver - Worlds To Run feat. milo and Anderson.Paak.