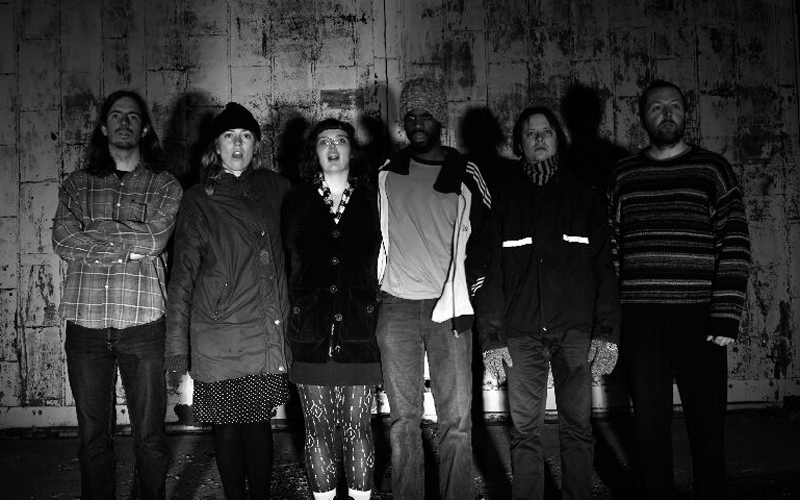 The basement is cramped, most of the space occupied by instruments or the detritus of previous band practices. The six members of The Pucumber Sasssquash Family Band take turns setting up their equipment. Bassist Annie Shaw (a.k.a ‘Annichoke’) and guitarists Sarah Good (a.k.a Asarahguts) and Josh St. Denis (a.k.a ‘Joshua Rad Radish’) must squat on their amps simply to allow room for everyone to fit.

Fuelled mostly by beer and homegrown vegetables, Pucumber Sasssquash is in the midst of preparing new songs for the release show of their new record Quantaundron?. One of the tracks is tentatively named “The Short Circuit Song or The Transformer of the Opera (gets kicked by Alex)”. “We have so many different names for songs, it can be hard to keep track sometimes,” explains drummer Mark Raymond (a.k.a Potadre Celeriasis) before the band launches into ‘Bmorgiclean.’ It’s one of Quantaundron?’s highlights, a track that seems to slowly gather up speed as it builds towards its fiery, cacophonous climax.

Of all the punk, post-punk and post-hardcore bands to come out of Hamilton in recent years, few have (or may ever) match the sheer singular distinctiveness of The Pucumber Sasssquash Family Band. Loud, energetic and proudly strange, Pucumber has been active since 2012, when they were initially conceived with an entirely different goal in mind. “Pucumber was originally brought together to help make somebody else’s solo music,” recalls St. Denis, as he sifts through his vast record collection. “When he moved away from Hamilton we thought we could sort of do the Andy Warhol thing where he would direct the group from a distance, but outgrew that over time.”

Pucumber has now become entirely their own entity, with surrealistic, permaculture-related imagery permeating their lyrics, song titles and album art. Even their own identities and names are tossed aside. Of the inspiration for these images, St. Denis says they “brewed organically.” “We all garden,” he says, “we all ride bikes everywhere… for lack of a better word we are kind of hippies. But we also hate anything that’s typically hippie related.”

After the release of their self-titled EP in 2015, Pucumber has returned almost two years later with Quantondron?, an album that swaps the EP’s lo-fi sensibilities for more of a polished production, without losing any of the band’s trademark ferocity. “This time around we wanted to actually make it sound good,” says St. Denis. “We made the first one pretty cheaply, without really knowing just what we were doing, mostly because that’s all we could afford to do at the time.” Across the entirety of the new record, Frontman Mike Simon (a.k.a ‘Zucchini Jackson’) shouts and howls his vocals overtop of off-kilter guitars, pulsing synths courtesy of John Dalton (a.k.a Dj Castrated Eggplant) and frenzied drums that all coalesce into a feverish and hectic whirlwind of noise. In particular, album highlights “Aziz” and “Robo Bo Bo a Gogo” skillfully contrast Jackson’s guttural vocal style with tight, angular guitar riffs that would sound at home on a record by The Fall.

Released this spring, Quantaundron? is less a wild alteration of Pucumber’s sound and more of a well-crafted refinement. Noisy and eccentric, the record captures the groups modus operandi in a little over twenty minutes and when St. Denis admits that “it’s not exactly like we’re writing pop tunes”, it becomes clear that everything the band does is tinged with the discreet confidence of a group that knows its audience well, and more importantly, know themselves even better.