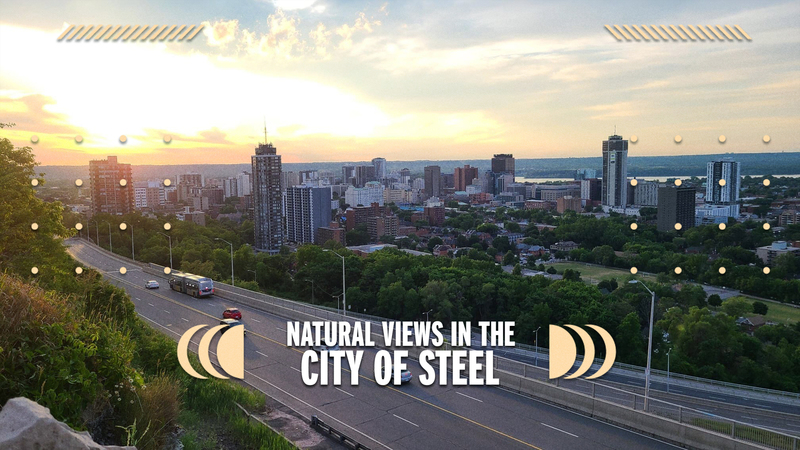 At one point or another, every Hamiltonian has marveled the scenery of the Hamilton Escarpment. Whether it be strolling the walkways of Sam Lawrence Park, braving the steps of the Chedoke Stairs, or riding the bus downtown. I, like every Hamiltonian, can agree that the stretching view from the peak of the escarpment is beautiful and breathtaking. You are left speechless, no matter how many times you see it.

Standing above the city, looking out at the horizon of lower Hamilton on a 90m high slope of bedrock. That is what makes Hamilton different from any other city. The Hamilton Escarpment, an 11km long sloping cliff, is an iconic aspect of Hamilton’s diverse natural wonders. It is a massive slope of lush vegetation and wildlife, a crucial link connecting the Niagara Escarpment to its ecological corridor.

Looking at the sheer steepness of the slope, it is hard to imagine the teeming wildlife that calls the Hamilton Escarpment their home. Butterflies of many kinds and animals such as snakes, birds, and rodents, live along the escarpment’s diverse trees and plant life. Some of which can be spotted as you walk the various trails that line the escarpment face. If you are lucky, you might get a chance to see the Cooper’s Hawk, swooping along the edge of the Hamilton Escarpment.

Views of the Bay from the Hamilton Harbour

The shores of Lake Ontario’s southern-most tip create the bay that forms the Hamilton Harbor. The water’s rise and fall are relaxing and soothing, making Hamilton Harbor a go-to spot for Hamiltonians to wind down after a long day. Parks and walking trails around Hamilton Harbour, such as Pier 8, Pier 4 and Bayfront, allow you to enjoy the views of the bay from every angle.

In 1993, when the walkways and parks of the Hamilton Harbor were first mapped and constructed, efforts and initiatives were taken to ensure sustainability and preservation of wildlife as one of the top priorities. Now, Hamilton Harbor is the perfect place to marvel not only at the beauty of Lake Ontario, one of Canada’s Great Lakes but also at the stunning habitat that contains so many species of wildlife. Various fish, waterfowl, and birds live and flock to the shores of the Hamilton Harbor to live and prosper.

In my childhood, I was always in personal awe of how clear the waters of Hamilton Harbor are. Understanding the decades of sustainability initiatives taken, this awe has grown tenfold in my eyes. The Hamilton Harbor is a treasured part of my childhood, one that I will never forget. Especially the memories of being chased by geese!

Named after James Bruce, the Governor General of the Province of Canada from the years 1847 – 1954, the Bruce Trail is over 800km long and runs through Southern Ontario. The entirety of the Bruce Trail spans along the Niagara Escarpment, which was named a UNESCO World Biosphere Reserve in 1990. In fact, the Bruce Trail is one of the oldest and longest hiking trails in all of Canada. It takes hikers almost 30 days to walk from one end of the trail to the other!

In Hamilton specifically, large segments of the Bruce Trail cut through Dundas and Ancaster, with many side trails and smaller segments scattered throughout the Hamilton – Halton – Brant region. Hamiltonians can admire the beauty of the massive forests that make up the Bruce Trail, lined with hidden streams and stunning views. The Bruce Trail Conservancy works incredibly hard to maintain the ecological habitats and land that the Bruce Trail travels through, allowing hikers to walk alongside some of Canada’s most stunning wildlife.

Hamilton, widely known for being the City of Steel, has a second name. The City of Waterfalls. Hamilton Ontario, the Waterfall Capital of the World, is a treasure trove of over 150 waterfalls, most of which can be found all along the Bruce Trail. Many waterfalls are congregated together along distinct routes of the Bruce Trail’s main hiking path, with one of the most popular trails being the Felker’s to Albion Falls Route. This route showcases many stunning waterfalls, including Felker’s, Glendale, Albion and Buttermilk Falls. However, some waterfalls, such as Sherman and Canterbury Falls, are hidden away amongst side trails and hiking paths that peak out of the main trail. So, no matter where you hike along Hamilton’s Bruce Trail, you are more than likely to see a few waterfalls along the way.

Having called Hamilton my home for so many years, and throughout that time, admiring the views from the Hamilton Escarpment, Hamilton Harbour, and Bruce Trail, I have come to realize and appreciate just how much nature is embedded into the roots of our City of Steel.