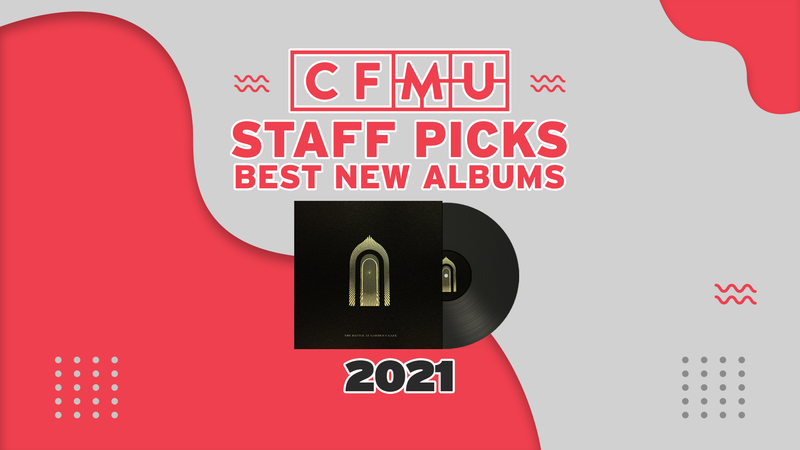 With the year coming to an end, we asked 93.3 CFMU staff to name their latest favourite album. The following is what they had to say.

The Drums - Mommy Don't Spank Me

Picked by: Olivia Mann-Delany (CFMU Music Director)
​
The Drums began as an indie piece from NYC in 2009, recently becoming a solo project by front runner Jonny Pierce. Traditionally, The Drums produce a surf rock and synth pop inspired SoCal sound with heavy reverb and melodramatic vocalism, reminiscent of Orange Juice’s 1982 Rip It Up.

The Drums 2021 EP Mommy Don’t Spank Me features a mix of new releases, unreleased tunes from the 2010s, and remixed singles. Mommy Don’t Spank Me details the troubles of human connection, heart break, and Pierce’s trauma turned inspiration from years of abuse and shame in religious schooling. The light hearted accompaniment to Pierce’s solemn, almost sprechstimme vocal style, and the simplicity of each song makes the EP listening both enjoyable and reflective. My favourite track on disc one, What We Had, demo’s The Drum’s knack for loops and layering and features echoey hums, vibrato guitar from an authentic single-coil fender, wind chimes, and the violin.

LISTEN: MOMMY DON'T SPANK ME BY THE DRUMS

Picked by: Jomar Quilatan (CFMU Production Coordinator)
​
I’m a huge fan of songwriting involving neat-sounding chords. Many of the songs in the album Sling by Clairo have just that, along with unique progressions, some of which remind me of the songwriting style of the great Laura Nyro. And if that isn’t enough, the background work executed by producer Jack Antonoff (Bleachers, Taylor Swift) adds an extra layer of complexity to it all—check out the breakdown video of the track “Amoeba” if you need convincing.

Injury Reserve - By the Time I Got to Phoenix

Picked by: James Tennant (CFMU Program Director)
​
A few years ago, after introducing my teenage son to music for many years, the tables were
finally turned. My son had became a big fan of underground hip-hop. He even got me a ticket to see Injury Reserve. Injury Reserve have been together since 2013. Tragically, in 2020, member Stepa J. Groggs passed away. At the time, the group had been working on new music; in 2021, they released By the Time I Get to Phoenix. The album, abandons most signifiers of what people think of as “hip-hop". Wesley McLean from Exclaim! Magazine says "...the most experimental and least accessible Injury Reserve project thus far, abandoning any semblance of tradition or convention".

My first reaction to this record was “What’s happening?” however, on the second spin, it all fell into place. The music is filled with stuttery beats, moments of glitch, elements of noise music, rhymes, rhymes that sound more like spoken word pieces than rap, wonky auto-tuned melodies, and other elements too numerous to name. What came to the fore, for me, however, was that in spite of all this it’s still somehow a hip-hop record. It’s my current pick simply because it’s been a while since I’ve had to decipher a record; to spin it until each successive layer revealed the next and it all started to make glorious sense.

LISTEN: BY THE TIME I GET TO PHOENIX BY INJURY RESERVE

Picked by: Sandeep Bhandari (CFMU Administartive Director)
​
The second full length album from London based poet and singer songwriter Arlo Parks sets the tone for a perfect downbeat, soul-fused soundtrack to Sunday mornings. The album is a collection of well crafted mellow songs with intimate double tracked vocals in front of baggy beats and airy reverb drenched synths. Collapsed in Sunbeams (taken from a Zadie Smith short story) is reminiscent of classic Lauren Hill with its subtle, stripped-down production, open 70’s chord voicings juxtaposed with honest, heartbreaking lyrics. Parks opens up - “My album is a series of vignettes and intimate portraits surrounding my adolescence and the people that shaped it,” and in doing so, gives us one of the best jazzy, soulful and vulnerable albums of the year.

Picked by: Emma McCarty (CFMU Community Outreach Coordinator)
​
In April 2021, New Jersey rapper Topaz Jones released his latest album Don't Go Tellin' Your Mama. The album was accompanied by a 35 minute short film co-directed by Jones and rubberband. The album itself details Jones' youth through a collection of songs delivered through rap and spokenword with rhythmic bass guitar, synths, and pattering drums. Each song tells a story of Jones' childhood and the struggles he endured. While Jones' lyrics detail a dark, rough past, the music is often light and easy creating an interesting and uneasy contrast. Accompanied with the album is of course Jones' short film of the same name. The film comes with high praise and even won an award at this year's Sundance Film Festival.

Picked by: Derrick Chappell (Digital Media Specialist)
​
Greta Van Fleet is made up of three brothers and a drummer from Frankenmouth, Michigan. The Battle at Garden’s Gate is their second studio album released on April 16, 2021. If you follow Mainstream Rock, you have definitely heard their single My Way, Soon at the top of the charts earlier this year. In just a few years, Greta Van Fleet has gone from touring local bars, to headlining concerts and winning a grammy. What makes this band unique is that they are a modern band playing Seventies classic rock. Growing up in the 90s I was introduced to music through my father’s burnt CD collection. Without a doubt, one song on each of those CD’s was from the rock gods themselves, Led Zeppelin. Hearing songs like Heat Above or Built by Nations by Greta Van Fleet takes me back to my walkman days and carrying around a binder of CDs. If you like Led Zeppelin and haven’t heard of Greta Van Fleet before, I highly recommend you check this album out, as well as their other albums, 2018 - Anthem of the Peaceful Army and 2017 - From the Fires.

LISTEN: THE BATTLE AT GARDEN'S GATE BY GRETA VAN FLEET