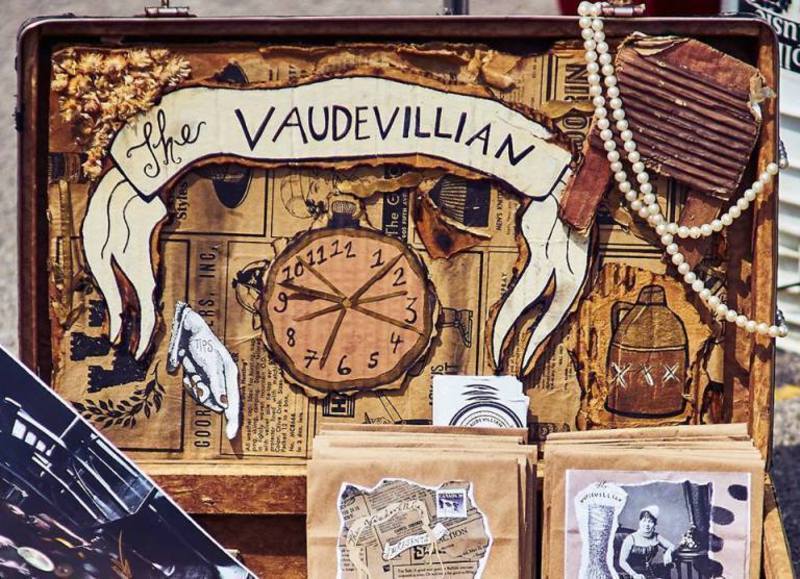 The Vaudevillian opened their Eastern Canada tour with a show at the Casbah here in Hamilton this past Tuesday. The venue was a perfect setting for the 1920’s reminiscent ragtime folk band. The three-piece band performed with a mix sounds from their classic ensemble of guitar, double bass, and the renowned washboard. It was as if they took the venue a century back in time. One single yellow spotlight shone on the trio against a red curtain backdrop. Norah’s blue and white, knee length polka dot dress and Jitterbug James’ and Piedmont Johnsnon’s respective denim overalls and suspenders gave no indication we live in a century of iPhones and social media; rather, the accented country drawl in the vocals and the clang of the washboard brings thoughts of wheat filled fields and horses.

I first stumbled across the Vaudevillian one year ago during Hamilton’s Supercrawl, the popular art festival boosting local artists and vendors along James St. North.

Since then I have occasionally seen them busking in various spots downtown Hamilton. It was the twang sound of country guitar that initially drew me to the crowd around them. The Vaudevillians are that cute folk-y band you hear whose old time bluesy sounds charm you into swaying back and forth, and whose persona make you reminiscent of an era you’ve only experienced through stories and films.

Aside from the washboard, double bass, and guitar their tracks often also include a banjo, piano, and harmonica. Their most recent album “Bringing Satan Down” was released this past August, and the band is currently embarking on a tour through the Maritimes. Though they play music from a seemingly outdated genre and sound like an old time band, don’t be fooled – they still have lots of new content on the rise. Don’t miss out on this uniquely Hamilton folk trio as they jet off with twangy tunes across Canada. You can catch their show dates below: