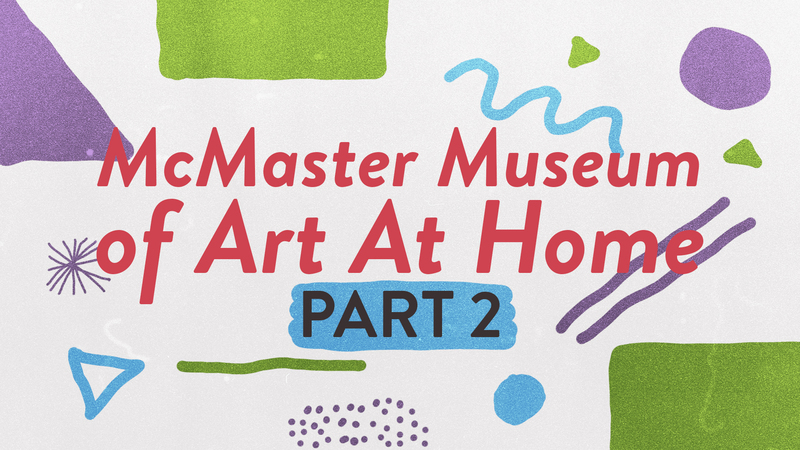 Over the course of the 2019-2020 academic year, I covered some of the exhibits happening over at the McMaster Museum of Art (MMA). On MorningFile, I interviewed artists and curators alike, each with their own unique stories and ideas to share, right up until the COVID-19 lockdown began.

The last of these interviews was with Deanna Bowen, a Toronto-based, multi-award-winning interdisciplinary artist whose exhibit Deanna Bowen: A Harlem Nocturne (curated by Kimberly Phillips) had begun showing in the museum on January 16th and was set to end May 9th, with a special related film screening and discussion scheduled for April 3rd.

The MMA might be closed physically, but this exhibit is one of several that is available to be explored online. A virtual tour of the exhibit is available through the MMA website here, and the film that was set to be screened can also be watched online. With that in mind, let’s jump right into the world of A Harlem Nocturne.

Not only has Bowen won multiple awards for her work, she’s also exhibited at museums like the Royal Ontario Museum, the Art Gallery of York University, and the Art Museum at the University of Toronto. In her artistic practice, she examines race, migration, and history, specifically focusing on Black experience in Canada and the US. In our interview, she described her work as “genealogically-driven”.

That’s just one part of what goes into her work – exploring the broader implications of that history is another.

“Beyond that, I use that family history as a kind of roadmap to look at other things that were going on in the world – particularly, white supremacy, because I’m interested in why my family had migrated…And then that has opened up bigger conversations around Canadian cultural history, anti-blackness in Canada or the denial of racism in Canada...”

A Harlem Nocturne itself focuses centrally on Bowen’s research over a period of three years into a network of individuals central to Vancouver’s Black entertainment community in the 1940s through to the 1970s. Many of these individuals were members of Bowen’s family, which was central to the project from the very beginning. At the time A Harlem Nocturne began to take form in her mind, Bowen had spent a long time away from her family, moving to Toronto twenty-five years ago to, in her words, “figure [herself] out” – her own beliefs, thoughts, and ideas.

“I had been estranged from my family for a really long time…Naturally, because of that, every single thing I did was about understanding them. And, in a weird way, over time, it became clear that I was making my way back home,” she added.

This culminated in a literal return ‘home’ to Vancouver after all those years, at which point the concept of the exhibit became the exploration of interconnected events and memories that it is now. In her research, Bowen drew from various sources, including published records such as newspaper clippings and provincial archives, and more personal sources, including her own recorded conversations with her mother.

In our conversation, she also emphasized the importance of the time span the exhibit covers – four decades’ worth of information – as it provides further background for the events she was researching. The project naturally expanded to include that background and context.

“It opened up,” she reflects. “It’s my family’s history, but my family was part of a community of other Black people, and so in other ways it taps into their lives as well.”

The scheduled film screening was of The Long Doorway, a 2017 piece by Bowen, which is inspired by “The Long Doorway”, a 1956 fictional CBC teledrama written by Stanley Mann. “The Long Doorway” focuses on a Black legal aid lawyer who is assigned to the defence of a white University of Toronto student charged with assault of a fellow student, a rising Black basketball player.

“’The Long Doorway’ is a really rare, Canadian screenplay that takes up race in Canada,” Bowen says of her interest in the original work.

No recording of the piece existed, so Bowen unearthed the script from the archives of Queen’s University and staged a recorded video production, with the set open to the public, also making it a live performance.

The exhibit also includes a four-channel installation featuring the behind-the-scenes conversations that took place during the making of the film.

“The back-end conversation about the project, about the performance, was actually the most compelling – I think – evidence of what Black Canadian-ness is, it’s more of a question than it is inherently an answer,” she remarked.

Overall, A Harlem Nocturne is an exhibit designed to be felt and experienced, and it is this way by design.

“…I’ve been making art for a long time, and I’ve been trained to consider art history and concerns around representation,” Bowen commented. “And I know that there’s also this other real thing about the ways in which Black art is consumed in Canadian spaces, most of them white Canadian spaces.”

“The shape of my work has taken the shape that it is because I just don’t want to produce work that can be easily consumed and forgotten by a white audience…I try to make things that I have a good understanding of how they feel in the body…that make you, the audience, feel what I feel at the same time,” she reflected. “I’m trying to create works that are empathetic, not just intellectual exercises, so to speak.”

You can explore A Harlem Nocturne on its McMaster Museum of Art page, and head over to Deanna Bowen’s official website to discover more of her work.

Olivia Fava is the former 2019-2020 Community Outreach Coordinator and is currently a volunteer contributor. Find her on Twitter here.