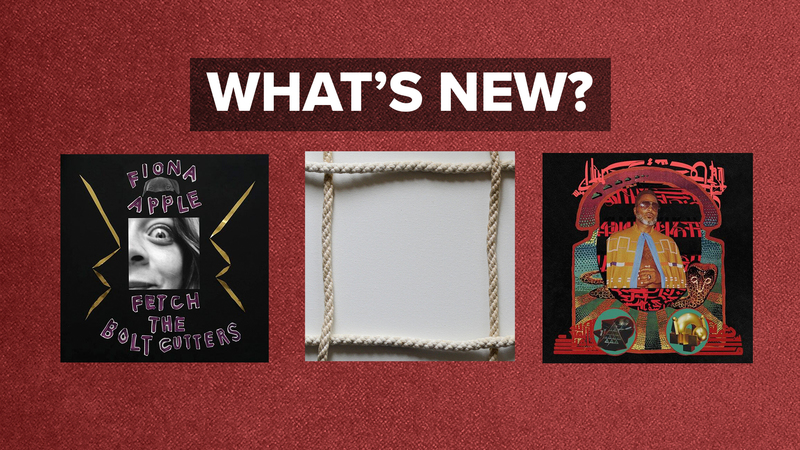 There are still so many good albums coming out…and, in lieu of being able to play them on the airwaves, let us simply point you in a few directions! Here’s some of the titles that we saw come into our music office this week.

If you’d told me that the new Fiona Apple album was going to be this – wildly unconventional, barely conforming to the rules of popular music, filled with musique concrète and the work of several pet dogs, I would have said say what now?​. If you’d told me it was going to be considered incredible and given a 10 out of 10 by Pitchfork I would have said, say WHAT now? But there you have it. Recorded largely in her home, Fetch the Bolt Cutters is her first album in eight years.

According to a Bandcamp album of the day profile, “The Don of Diamond Dreams is the most fully realized Shabazz Palaces LP yet—from [Ishmael] Butler’s new confidence in his own poetic authority to the way he and multi-instrumentalist Tendai “Baba” Maraire create hip-hop songs that never stop experimenting.” That sounds about right, as Shabazz Palaces have always created an abstracted, sideways version of hip-hop that pushes boundaries.

LISTEN: THE DON OF DIAMOND DREAMS BY SHABAZZ PALACES

Consider this the “single of the week”, since we’ve been unable to shoot our regular Single of the Week video segment! “Vacant” brings to mind – for this old man, anyway – songwriters like Matthew Sweet, or perhaps something from Fountains of Wayne (Adam Schlesinger R.I.P.). With a sunny melody and a straightforward production, it shows that Hamilton’s Inkster, who has been releasing a steady stream of music since 2018, is one of the city’s better up-and-coming songwriters.