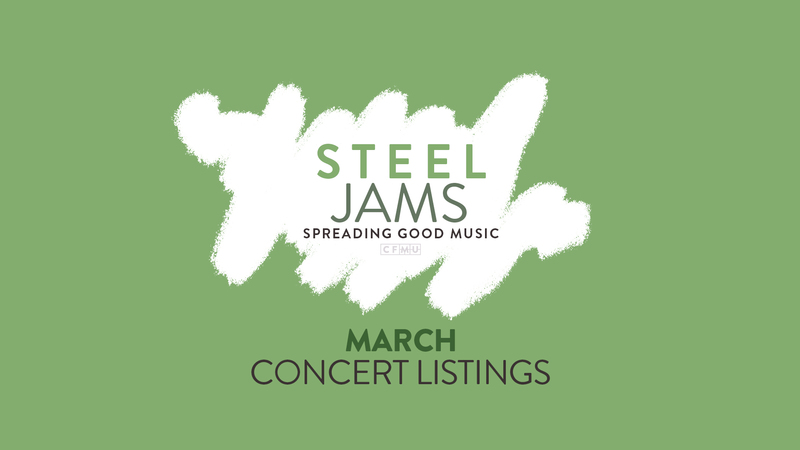 Are you an avid show-goer? Are you constantly looking for concerts in the Hamilton area? Do you like supporting local artists and venues? Do you find yourself discovering a great show and excitedly looking it up...only to find it's already happened? We’ve been there. That’s why we started ‘Steel Jams’.

With help from our music department, we’ll be keeping you up to date on some great shows happening right here in The Hammer. This month, Community Outreach Coordinator Olivia Fava, Production Coordinator Jomar Quilatan, and Sports Director Duncan Simmons have a handful of great shows for you to look forward to. Here are your hand-picked listings for the month of March.

Hamilton-based "sad but nice" artist Ellis, a.k.a Linnea Siggelkow, makes gorgeous, melancholy dream-pop that's caught on in a big way in The Hammer and beyond, especially since the 2018 release of her EP The Fuzz. Born Again is her much-anticipated upcoming project, slated for release in early April 2020. Come to The Casbah for what is certain to be an incredible night of new music. She will also be joined by Hamilton singer-songwriter Dan Edmonds and Toronto-based singer-songwriter Merival.

Album Hits: “Fall Apart”, “Embarrassing”
Personal Fave: “Fall Apart” - The slow, weighty rhythm section of this track always seems to cover me and weigh me down like a thick blanket. It's a deep, visceral feeling of heaviness that fits perfectly with the topic of the song. - Olivia

Album Hits: “Are You Ready”, “More Love”
​Personal Fave: “When You Come Around”: The perfect blend of all styles Cootes Paradise; the highlight of six talents shining individually while blending in perfectly to form an eighth note-driven groove that sits perfectly between straight and swing to add to the mood. Listen closely for the masterful use of the snare in Amy’s playing. Great percussion break in the middle, too. – Jomar

Drawing inspiration from their Nova Scotia roots, Villages perfectly captures the Cape Breton folk sound with a modern atmospheric twist. They will be joined by fellow Canadian folk artist Piper Hayes, a two-time nominee for the Colleen Peterson Songwriting Award.

The Anti-Queens @ The Casbah Lounge, Hamilton, ON
$10 general admission, Doors at 8pm, Show at 8:30pm, all ages

The Anti-Queens are everything you want from a punk/grunge band. The Toronto-based quartet brings attitude and energy on every track of their debut EP. If you’re looking to get the blood pumping, this is a must-see.

Album Hits: “Worse Than Death” and “Leave Me Out”
​Personal Fave: “Small Victory” - Put this on, grab your best moshing friends, and let the head-banging flow naturally. -Duncan

Saharan guitar legend Mdou Moctar (a.k.a Mahamadou Souleymane) is from a small, remote, traditionally religious village in central Niger where secular music was heavily restricted. When he first started to learn guitar, he taught himself on a homemade guitar made of wood; his music quickly gained traction with the village youth and, eventually, his lyricism even started to win over local religious leaders. His anticipated upcoming single album, Ibitlan, releases March 13th.

This show is presented by Strangewaves, a not-for-profit that places an emphasis on showcasing experimental and diverse music in Hamilton and the surrounding area.

Electronic-driven Caribou is the alias of Hamilton-based Daniel Snaith, joined with Ryan Smith, Brad Weber and John Schmersal for live sessions.  For the March 16 show, he has partnered up with PLUS1 so that $1 from every ticket will go towards supporting GRID Alternatives, an organization aimed at “bringing accessible renewable energy and technology and job training to under-served communities.”

Album Hits: “Never Come Back”, “You and I”, “Home”
​Personal Fave: Pretty even between “Sister” and “Magpie”, as each track hits uniquely for this reason: variation in the timbre of the backing synths.  In the former, it’s in the form of a pensive state of mind that tugs at you every one in a while and then smoothly backs away; in the latter, a nostalgic vibe reflective of the mid-70s to the early 80s with a strong electric piano presence. – Jomar

We're so excited to announce our 2020 Raise Your Voice fundraising show at This Ain't Hollywood on March 19th! Join us and a lineup of incredible artists and friends for an evening of  unique, diverse local music and community togetherness. The lineup: rapper LTTheMonk (a.k.a. Liam Tyndall), darkwave/post-punk duo Concavity, members of new rock band Strathcona, singer-songwriter (and painter!) Martin Verrall, Afro-Soul musician Kojo Damptey, and hip-hop artist Mother Tareka. We can't wait to see you there! 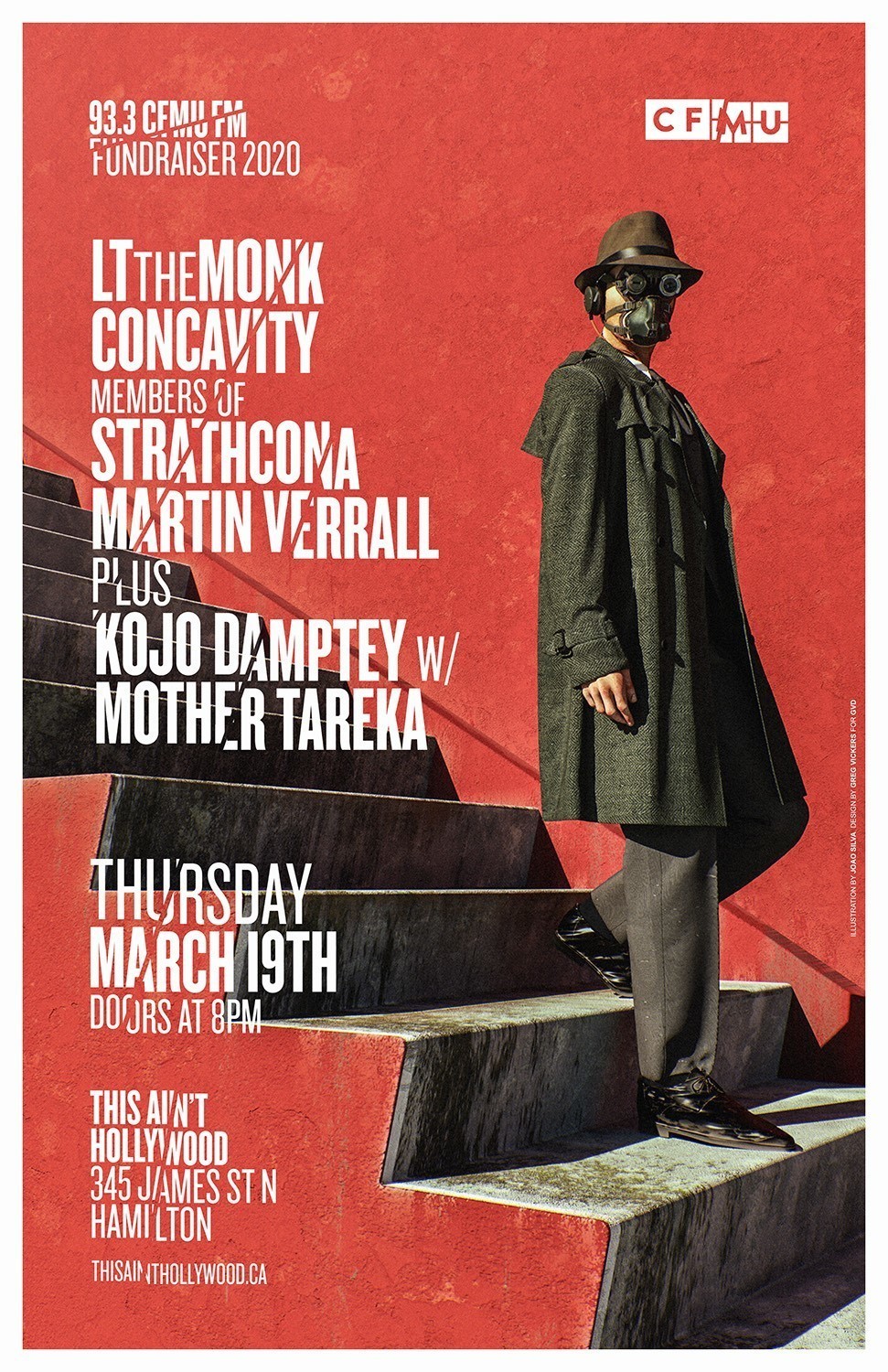 Singer-songwriter Matt Holubowski hails from the Hudson district of Montréal. He's played festivals like Bonnaroo, Osheaga, and Rober Smith's Meltdown, among others. After releasing the Gold-certified Solitudes (2016) and an epilogue EP in 2017, he returns after a two-month songwriting retreat in Banff with his latest record, Weird Ones. He will be joined onstage by labelmate Elliot Maginot, a folk-rock artist who has also played several prestigious festivals, including the Montréal International Jazz Festival and Canadian Music Week.

Album Hits: “Two Paper Moons", "Eyes Wider"
​Personal Fave: “Moon Rising". I love the space that the synths in this track are given to shiver and resonate, right from the beginning. Also, I love how smoothly the bass is introduced into the mix and how well it blends in; generally, the sound builds and expands naturally. The lead guitar (solo starts at 1:31) has a very industrial, almost drill-like sound that's attention-grabbing and very unique. The ending is also very spacious and quite suspenseful, and I love suspense in a song! - Olivia

Nine-piece, three-horn retro-revival outfit The Soul Motivators are a gem of Toronto's thriving underground funk scene. Self-described as "vintage deep funk",  they're fans of artists like A Tribe Called Quest, Sharon Jones & The Dap Kings, The Budos Band, and more. They're well-known for their explosive, energetic live performances, and have played festivals like the TD Toronto Jazz Festival and the Toronto NuJazz Festival, among others.

Album Hits: “Mindblastin’”, “Modern Superwoman”, “Savalas”
​Personal Fave: “Mindblastin'". If you ask me, this is the most popular song on this album for a reason. The vocal harmonies on the chorus in particular are strong and driving, and I absolutely love the funky breakdown at the 2:20 mark. This one definitely deserves a place of honour on your dance party playlist! - Olivia

Olivia Fava is a 2019 McMaster linguistics graduate, the current Community Outreach Coordinator at CFMU, and the host of MorningFile. Contact her through email at cfmucom@msu.mcmaster.ca.

Jomar Quilatan is a third-year Automation Engineering Technology student, the CFMU Production Coordinator, and the host of First Up (Mondays 6am EST). Contact him at cfmuproduction@msu.mcmaster.ca.

​
Duncan Simmons is the CFMU Sports Director and a 3rd year communications student from Vancouver, BC. He is the author of the Marauder Sports Roundup, released weekly on Wednesdays. Lover of all sports and all sports fans. Contact him at: cfmusport@msu.mcmaster.ca.