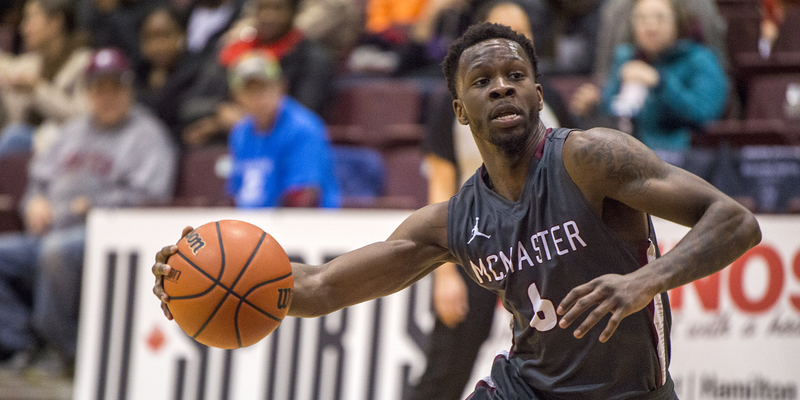 [All photos credited to Rick Zazluak]

Basketball season ended over the weekend in well-fought OUA quarterfinal matchups for both Marauder basketball squads. When great seasons come to an end in the playoffs, we’re left with what-ifs and unfulfilled dreams, but I’m here to shift gears a bit and  celebrate the great performance that we were lucky enough to witness. Our basketball players can hold their heads high knowing they played with grit, heart, and intense drive from the start. Let’s reflect on some of the highlights of the 2019-20 season and get the hype train rolling for next season.

The 2019-2020 Women’s Basketball team finished the regular season with a 14-8 record. I’ll admit that, at a glance, this doesn’t look all that impressive, but 14 wins is mind-blowing when you consider where this team was at the beginning of the season. Starting out with an 8-7 record, the Mac women channelled their inner fire and won 7 of their last 8 games. The spectacular way they pulled their season out of the gutter is unlike anything I’ve seen in my time as a sports fan. After a championship run in 2018, a down year would not have been unexpected, and with a start like they had, it would have been incredibly easy to roll over and give up entirely. 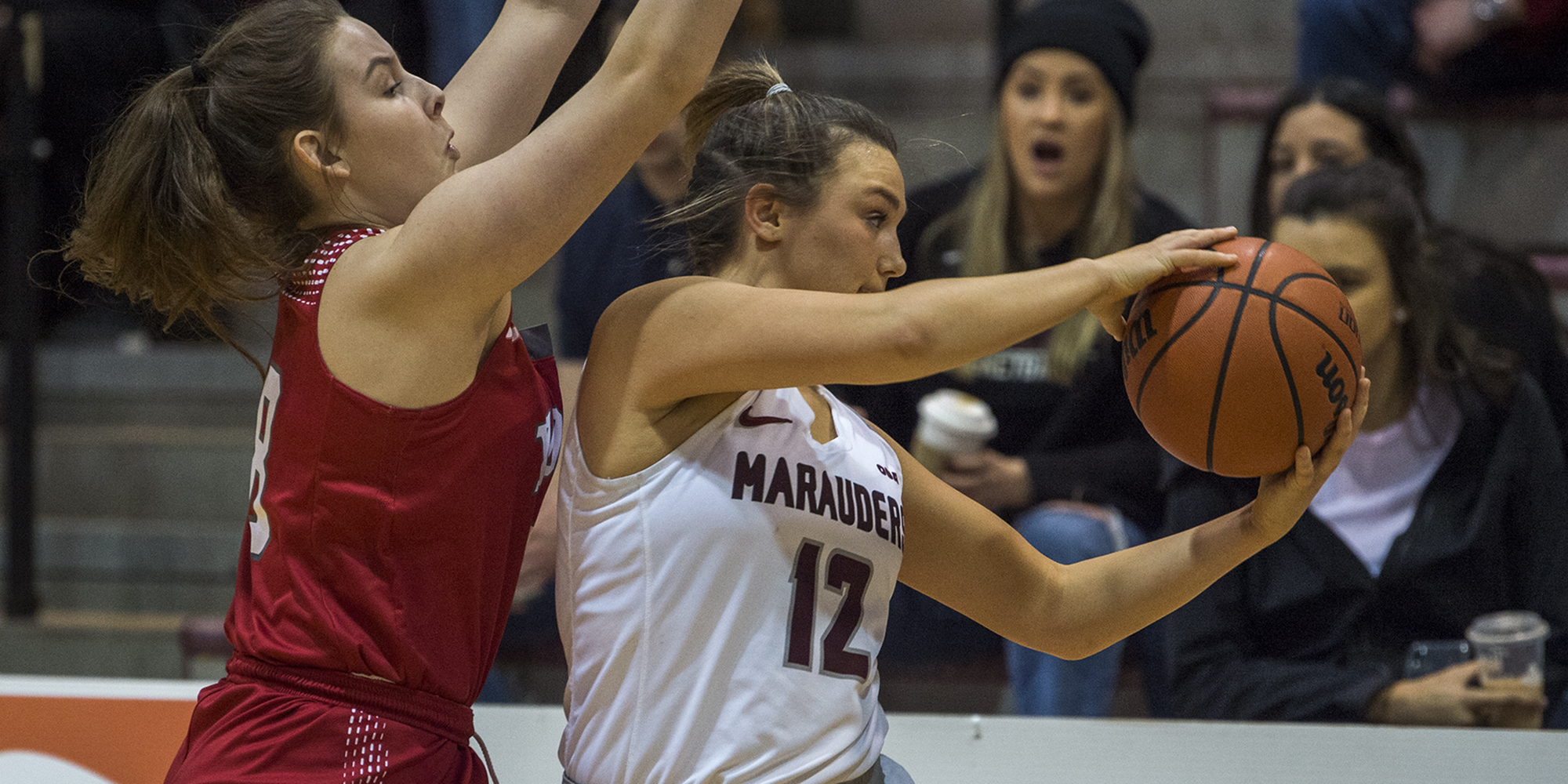 The Marauders are tougher than that, though, and surrender just wasn’t an option for a team with this level of talent and coaching. Coach Theresa Burns deserves a massive amount of credit for the way she pulled this team back from the brink. She will always be remembered for her national championship win, but this year provides yet more proof of the value she adds at the helm. Even without a ring to show for it, Mac has put the OUA on notice that they are never out of the fight. 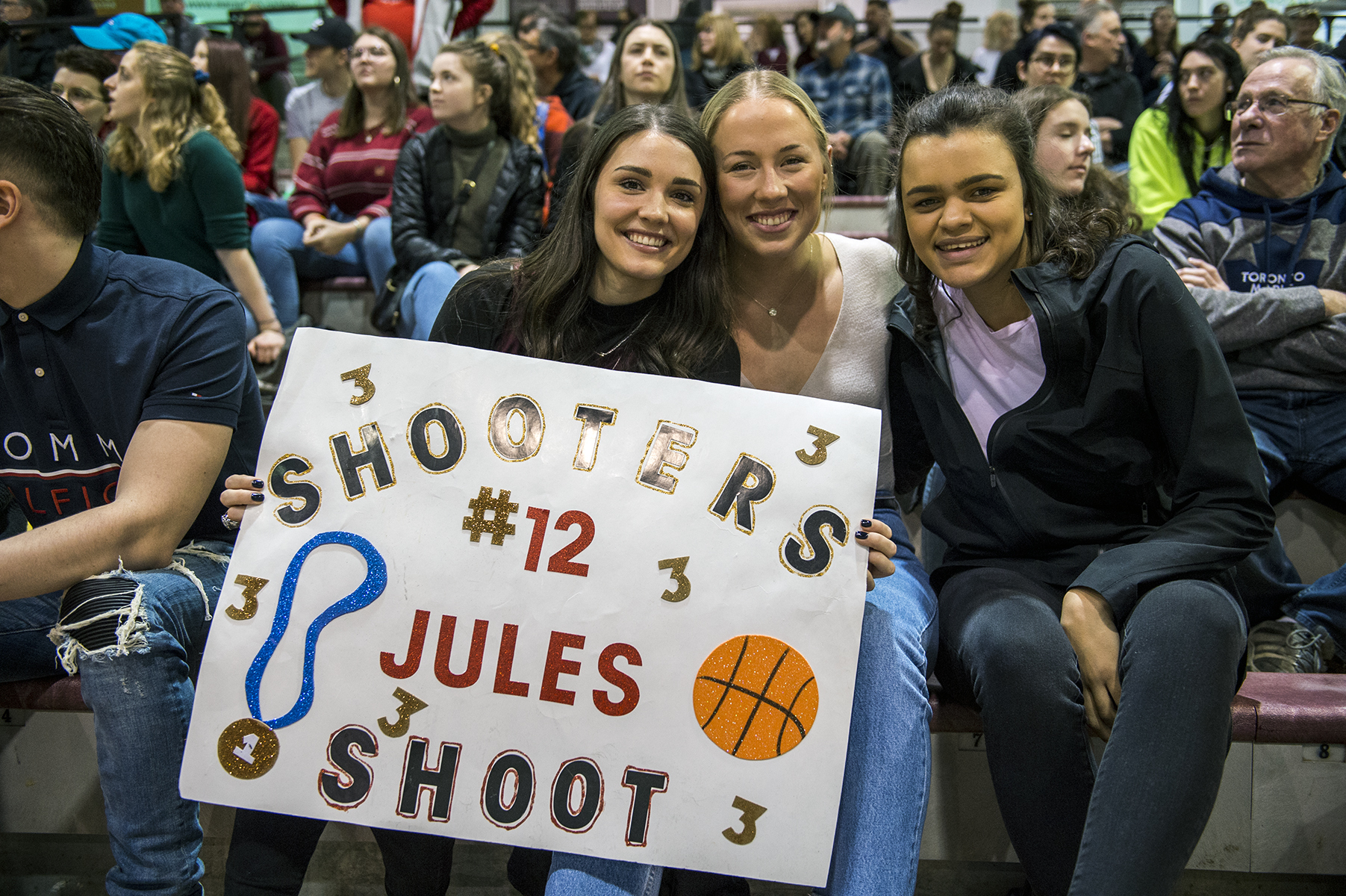 This game at Ryerson was a pivotal moment in the women’s season. Just 24 hours out from starting guard Arianne Soriano’s season-ending injury and playing their third game in 6 days, the Marauders took Ryerson to overtime and came away with the W. After losing by 38 to the Rams just 3 weeks earlier, Mac was out for blood.

Stepping up in Soriano’s place was first-year Jenna Button, who announced herself big time with 15 points and 5 rebounds against the 2nd best defence in the league.

Button’s tremendous numbers were only overshadowed by two of the OUA’s elite: Christina Buttenham and Sarah Gates. Buttenham was locked all the way in with 10 rebounds and 7 steals to go along with 21 points. Gates was on fire as always with 19 points on the evening. This win was the third  in what would become a 6-win streak for the Marauders. It is also a perfect allegory for their season; even with the odds against them, they cranked out a gritty win against one of the OUA’s best. 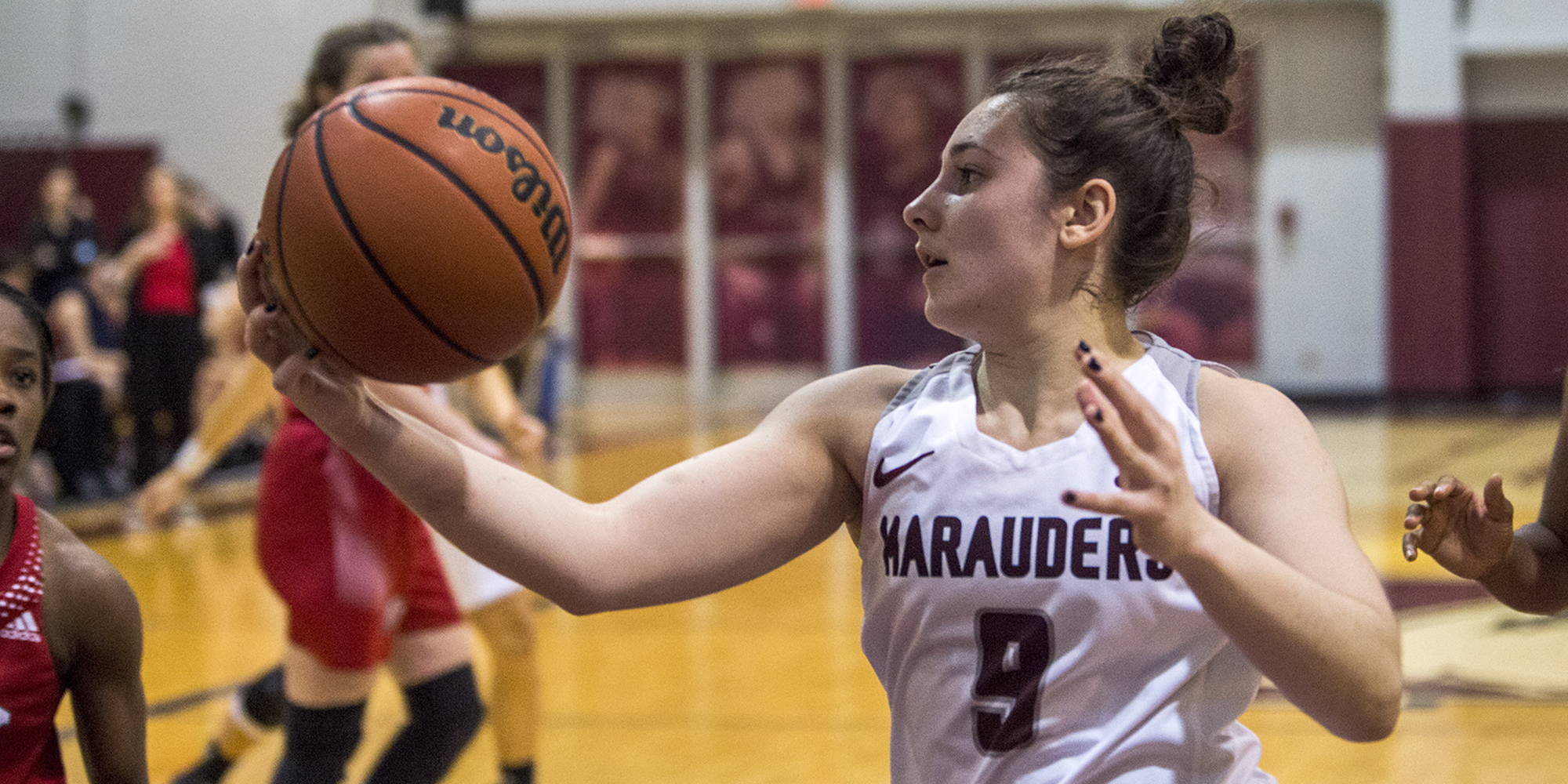 12 of 14 players will return on the 2020-2021 roster. Make no mistake, the leadership and play brought to the floor by departing members Julia Hanaka and Christina Buttenham will be sorely missed, but they can rest easy knowing this team is still in great hands. With a combination of  stars (both established and emerging) and great coaching, you can expect this team to be right back in the thick of things come next season.

Those following this team will not be shocked by this selection. Before I heap well-deserved praise upon Buttenham, though, an emphatic honourable mention should be given to Sarah Gates. Gates placed second in the league in scoring with 17.4 points per contest and also grabbed third-team all-star status. 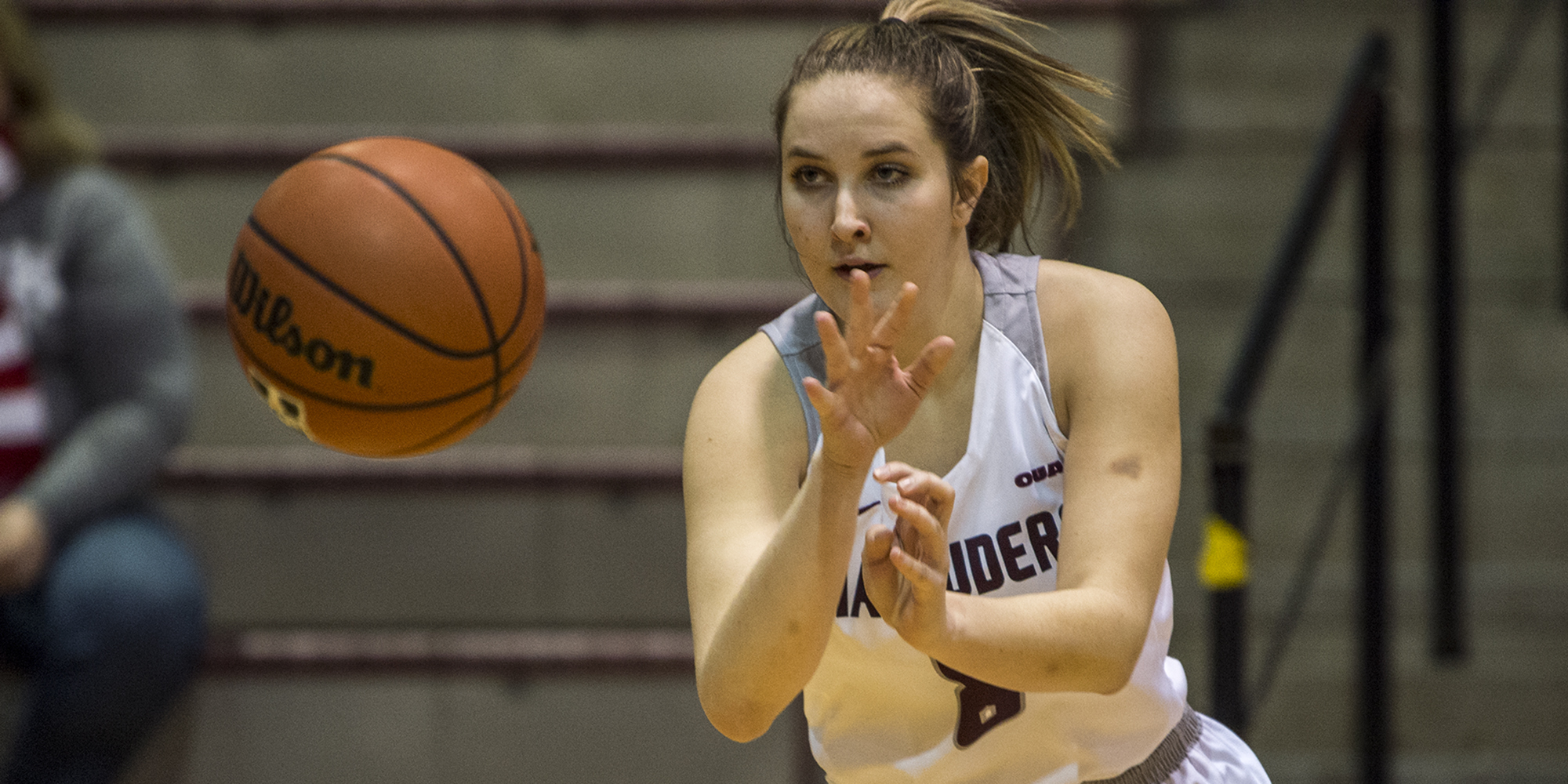 That’s undeniably incredible, but Buttenham is the clear choice here. She was named the OUA’s Defensive Player of the Year and first-team all-star. She is now the sixth Marauder to win DPOY and the first since current assistant coach Danielle Boiago won in 2016. Buttenham led the OUA in steals with 3.6 per game, breaking a school record along the way which was most recently held by Boiago.

Even so, the team will miss more than just Buttenham’s numbers this year. This fifth-year played with a fierce power that inspired her whole team during so many low moments this year. Christina Buttenham, we salute you. 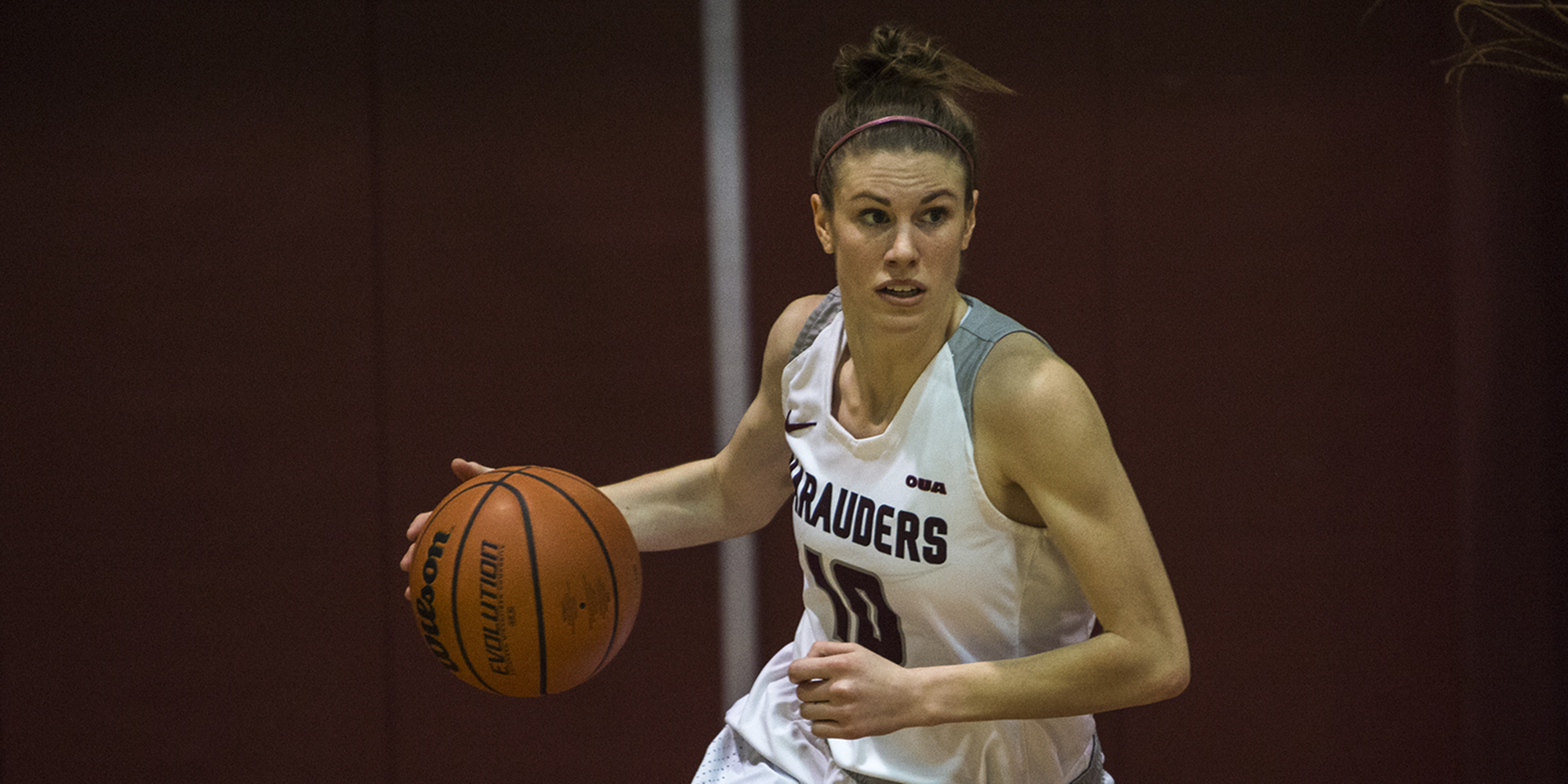 The 2019-2020 men's team wrapped this season up with a record of 12-10 but, just like with the women’s team, the numbers don’t do the talent justice. This team put up the second-most points of any team in the OUA this year and is stacked top to bottom with athletes who can hold their own on both ends of the floor. If Mac can translate that talent into a defence even close to the strength of their offense, they have no ceiling.

A playoff spot is cause to celebrate on its own, but this young team is only going to improve with another off-season to work on their game.

They will, however be without Connor Gilmore and Damiann Prehay next season. Gilmore was the man in the middle for Mac this season, grabbing 7.5 boards a game. He’s anything but one-note, though. Gilmore sent home 14.2 points a game, which is second-best for the team. 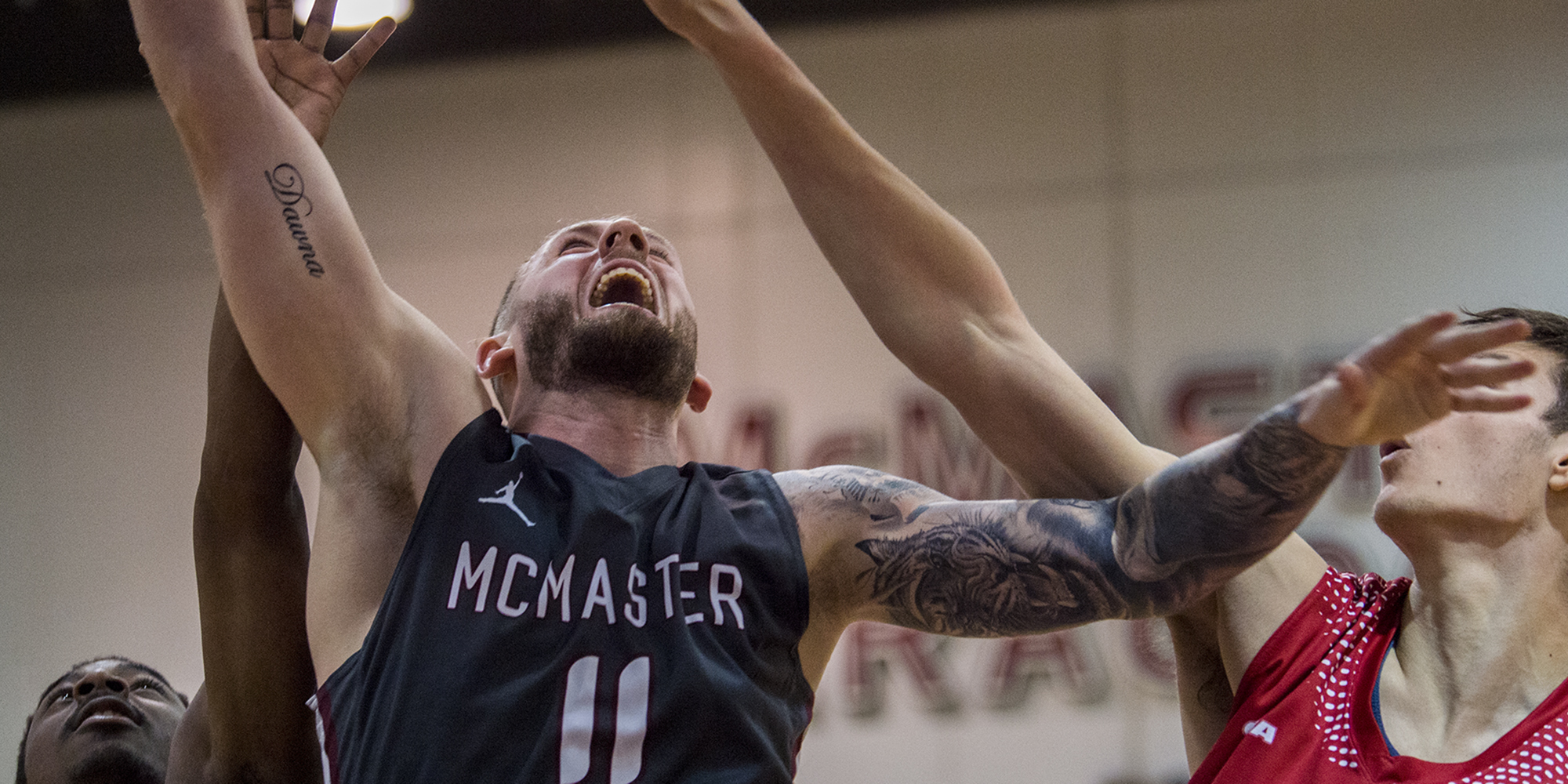 Prehay is the spark plug of all spark plugs for the Marauders. He added 9 points and 5 rebounds per game off the bench, playing at a pace unmatched by anyone I saw in the OUA this year. Filling these two players’ shoes will be daunting, but this team is up to the challenge. 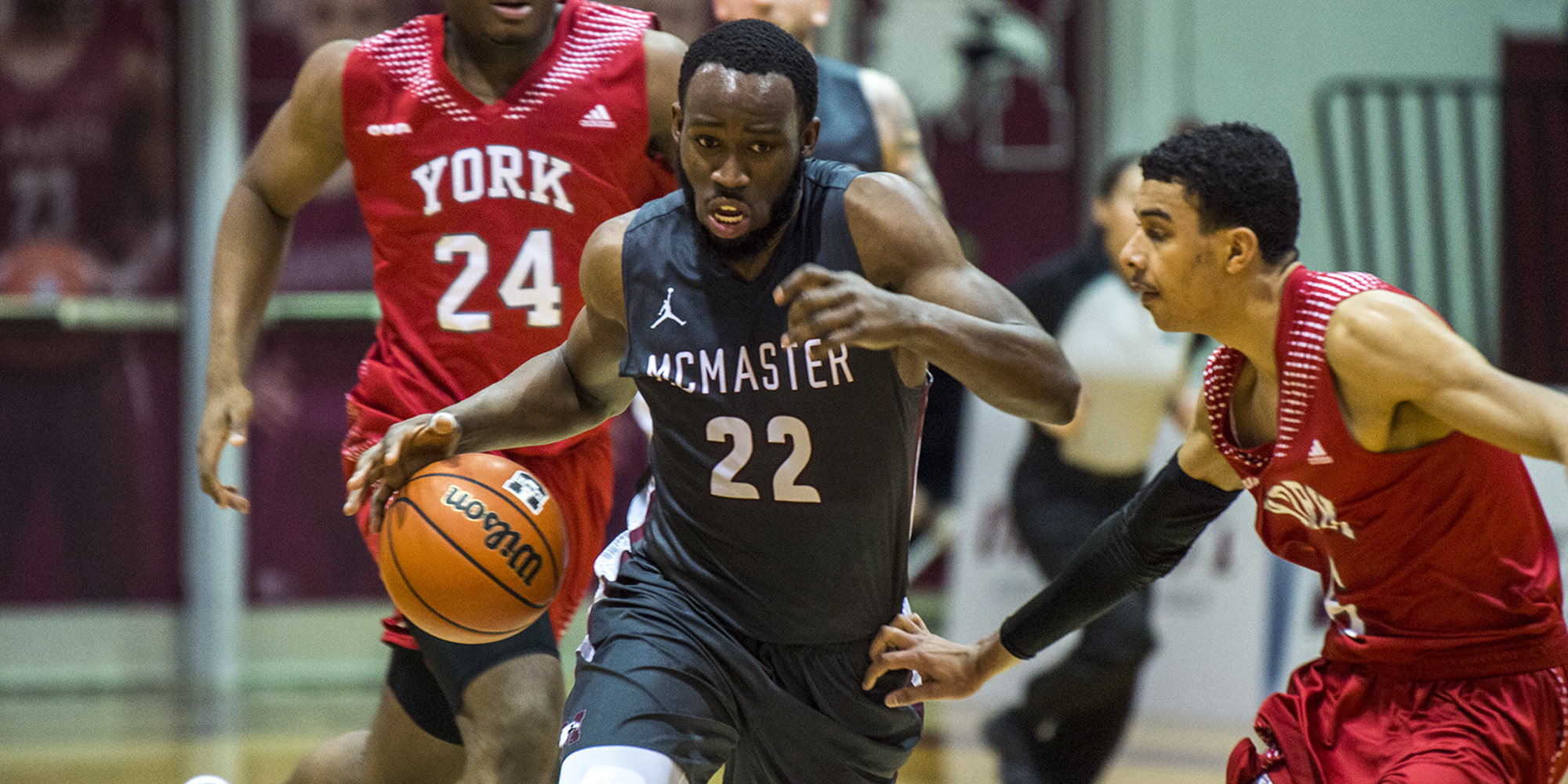 McMaster and Brock came into the first round of the playoffs with matching 12-10 records. Mac started with the upper hand, beating Brock twice early in the season. After hitting a slow patch late in the season, though, wins became less of a sure thing. This squad responded to this pressure with their best all-around game of their season.

A quartet of Marauders hit double-digit points. It was especially encouraging that all four - Jordan Henry, Mike Demagus, Tristan Lindo, and Maliek Gordon - are in first or second year. Henry also hit a new level of court vision, finding every open teammate and setting them up to make plays. Forwards Kwasi Adu-Poku and Connor Gilmore locked down the middle, combining for 23 boards. This win was  a testament to this team’s ability to deliver a strong performance when it’s needed most. If Mac can hit this rhythm on even a semi-consistent basis going into next year, they will be the Goliath to the rest of the league’s David. 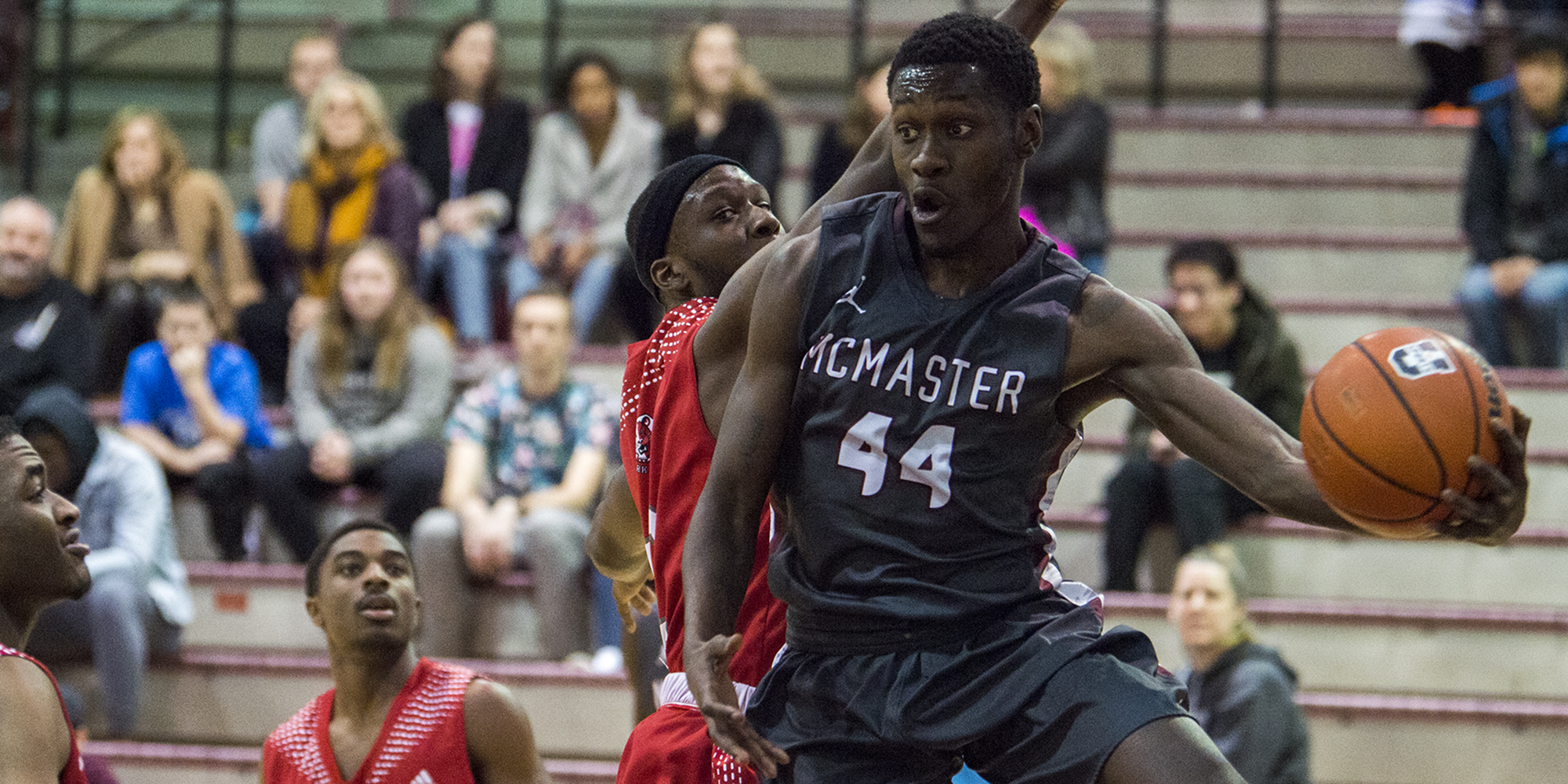 Coach Patrick Tatham should be rejoicing, knowing what he has in Jordan Henry. In just his second season, Henry already owns the Mac single-game scoring record with 46 points, and also placed4th in both scoring and assists.

But this player is even more than his insane numbers. Henry is pure spectacle. He attacks the rim with aggression and flair that is unseen at this level. I could write ten articles about Jordan Henry and never put into words what he adds to this squad. So, in short, I’m a fan, and you should be too. 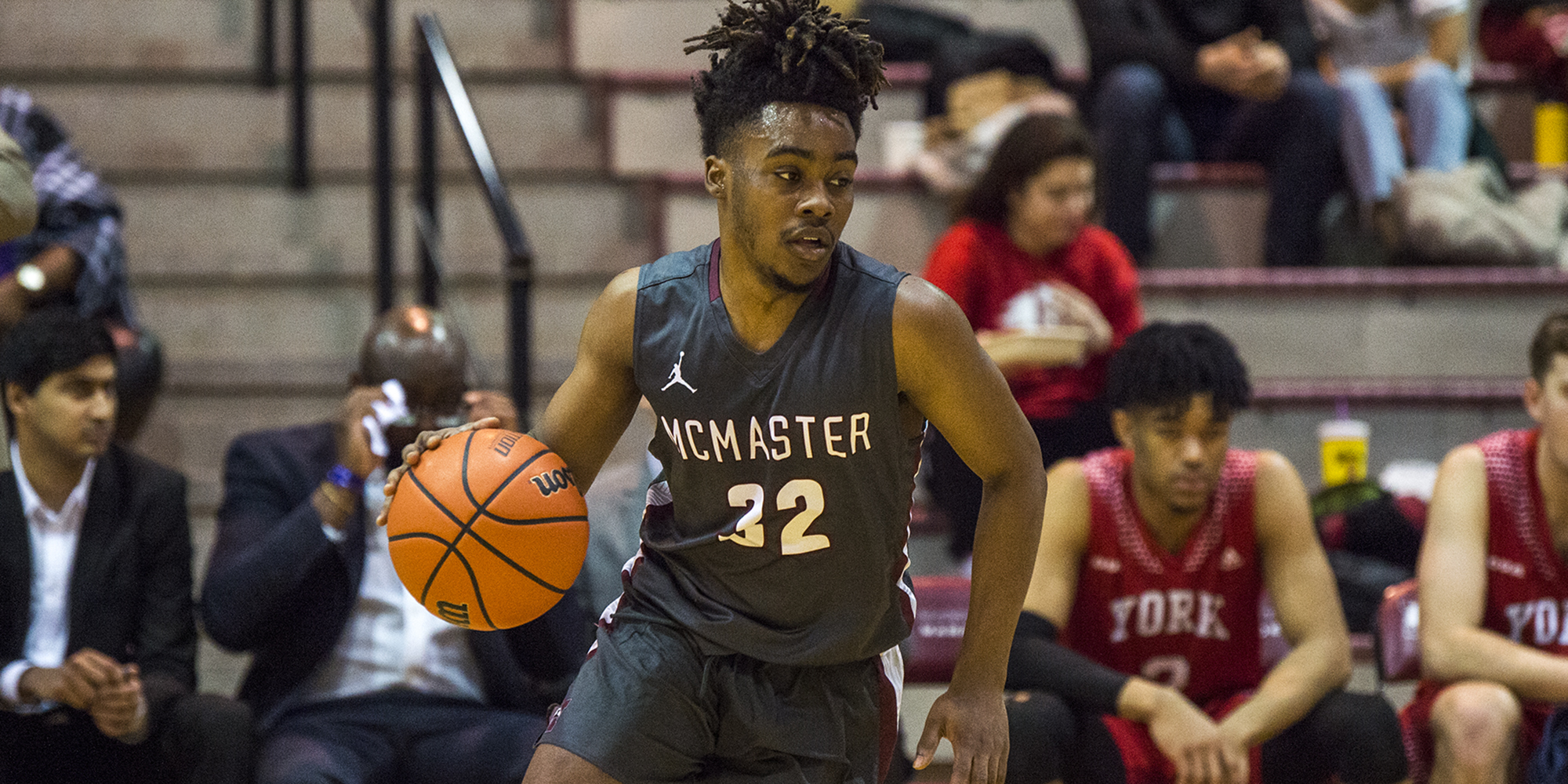