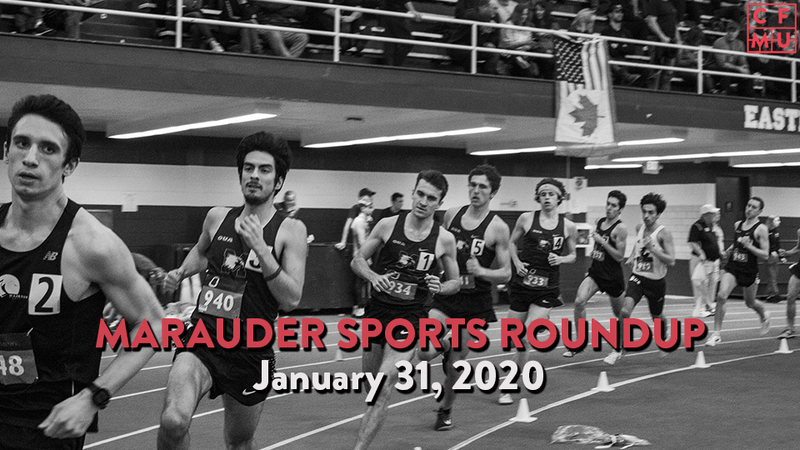 Watching sports on TV is pretty great, but the best way to spend an afternoon in front of a television is watching cooking competitions, hands down. And, you know, TSN and Cake Boss have more in common than you’d think. You start with a bunch of ingredients and, by the end of it all, you’ve either combined them together beautifully or made a big pile of mystery goop.

We’ve reached the home stretch of the Winter 2020 season for most teams. If this were a cooking show, this would be the part when the host starts counting down and everyone’s trying to plate. All the pieces are there, now they just need to come together.

Before we get to talking about the games against Queen’s on Friday, let’s jump forward in time a bit and take a quick look at the Ontario Tech games from Saturday. Both these games were massive blowouts for the Marauders -  the men won 102-55; the women, 87-55. Nothing much to be learned from games that have this much of gap between the two teams, so there’s the easy part done. Now,  let’s move on to a couple more meaningful games.

The Queen’s women’s team was number 6 in the country coming into this matchup, making them no small threat for a Mac team that has struggled to close games against tough opponents. Mac held close in the first quarter, but the second quarter was key in this one. The Marauders were unbreakable on defence, allowing just five baskets to Queen’s in the entire quarter. They didn't allow Queen’s any free throws, either. Another key was the ever-spectacular plays of Christina Buttenham and Sarah Gates. These two are becoming an artillery show for the Marauders that can go on defence-shattering runs. Gates is currently 3rd in the OUA in points, with Buttenham not far behind at 7. On the nights Mac can pair a solid defence with their offensive firepower, it works on every level a great basketball team should. They showed signs of that here; now, it becomes about doing it consistently.

On the nights Mac can pair a solid defence with their offensive firepower, it works on every level a great basketball team should.

The Mac men got up in their game versus Queen’s by taking a 10-point lead early on in the first quarter. Unfortunately, they let Queen’s right back into the game and had to fight to stay in it.

The end of this game left me with more questions than answers. What causes these mid-game slumps that ultimately end in 4th-quarter nail-biters every week?

My first thought is that all these close-fought games could be wearing on the team. Sefa Otchere has missed 4 games now, and Mike Demagus went out in this game with an injury that kept him out of commission for the game against Ontario Tech. Both are versatile scorers from the wing, but we currently have no word on when we can expect them back. The Marauders have depth in that position, with players like Damiann Prehay and Brandon Bernard, but I’d feel a lot better having all 4 of those guys. Despite dropping out of the national rankings this week, this team is still in fantastic playoff position heading into the home stretch of the regular season.

Speaking of the national rankings...

Men’s Volleyball Is Still Not #1. (And I’m Pretty Mad)

First of all, I realize that just griping about the men’s volleyball team being number 2 in the nation  is kind of gratuitous.. But, I’m going this route because this team is beating the snot out of their opponents so badly that I have no interesting angle to expose here. What you see is what you get; pure dominance.

“But Duncan, can’t we just be stoked that they’re doing well enough to be ranked number 2?!” says you, the reader, practically bubbling with optimism.

Yes…and also no. It’s good  to simply appreciate such a strong team, of course, but the national ranking is about giving credit to the best, and Mac is the best. The rankings rely on something called an Elo score. Essentially,  Elo gives you a score based on the strength of the opponents you have beaten. Oddly enough, exhibition games don’t count towards this magical number, meaning that when Mac slapped around the number one team in the country twice over the winter break, it somehow didn’t mean jack.

If you ask me, that really doesn’t add up. Common sense tells us that if you beat the best, you are the best. Hasn’t anyone at USports seen a kung fu movie?

What causes these mid-game slumps that ultimately end in 4th-quarter nail-biters every week?

Track and field laced up for the EMU Can-Am International in Ypsilanti, Michigan and came away with cleats smoking. Olivia Macaskill was the top-placing Marauder in the 100 metre, finishing just outside the podium at 4th;we had 3 more runners in the top 10. In the women’s 3000 metre, Morgan McKeown set the time to beat and Caroline Forbes was not far behind, claiming the bronze. Amanda Lewis also cracked Top 10, coming in at number 6.

In the men’s division, Ryan Korol kicked off the results with a 2nd place finish in the 1000 metre. Korol ran a great time, but came in just one one-hundredth of a second behind the leader, which hurts me deeply.

Common sense tells us that if you beat the best, you are the best.

I’ve kind of buried the lead here, because the real star result of the day was in the men’s 3000 metre race. It wasn’t just one Marauder leading the pack, it was 6 (six!). Alex Drover, Sergio Raez Villanueva, Andrew Davies, Max Turek, Josh McGillivray, and Dylan Allick claimed spots 1 through 6, leaving no doubt as to our prowess on the track. Oh, and just for gravy, Mac had two more runners in the top 10.

With these results, I feel like we’re really just scratching the surface of what this team can be. This is the same roster as  the elite cross country team that dominated the fall semester. The talent is established, so sit back and watch the medals come in.