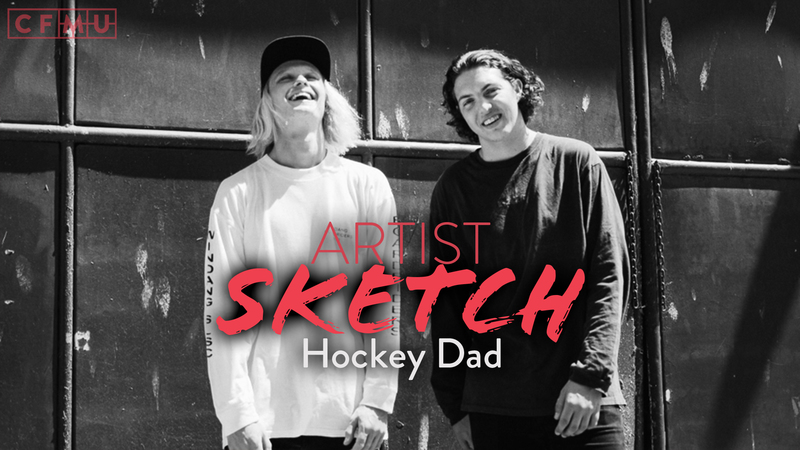 Picture this. I’m 17 years old and I’ve just moved into my dorm at McMaster. With some time to kill, I begin sifting through my recommended songs and stumble across “Laura” by Hockey Dad, a track off of their first record Boronia, which had come out two weeks prior. I am immediately hooked.

Three years later, I get the opportunity to sit and chat with two childhood best friends from Windang, New South Wales, Australia: vocalist/guitarist Zach Stephenson and drummer Billy Fleming - also known as Hockey Dad. Try to imagine how utterly thrilled I am. Do you get the picture?

After learning about their indifference toward Tim Horton’s and Billy’s conversion from pickle hater to lover, the self-described “garagey, surfey, rockey, non-threatening” duo and I talked all things new music, new members and future plans.

To start, how did you meet each other and what got your project started?

BF: I met Zach when I was four or five...so early days. We went to school together and our sort of first band was when I got into high school. Out of boredom we just started playing music. The members of that band...one got a girlfriend, one had a child, one got a job but we were still in school and the only two left so we were like: ‘why don’t we keep playing music?’. It was kinda cool - it worked out and now we’re here still doing it!

It was really awesome learning that you’re a two piece after listening to some of your music, the sound is incredibly full!

BF: Well tonight we’ve got a little bit of a surprise. It’s been five years of just the two of us...

ZS: …We welcomed a baby into the band!

That’s exciting! What’s it been like playing with another member?

BF: It’s kind of cool! Our new addition who’s playing bass for us now has recorded with us on every album besides the EP. He’s been with us for a while now, so it doesn’t really feel awkward or weird to have him with us!

ZS: Yeah we’ve been friends for a long time, so he kind of fit in pretty organically and it’s a lot of fun! It’s something a little bit fresher and makes the shows a bit more fun...changes it up.

ZS: Yeah, you kind of get into these habits, so it’s nice having someone in there to change things up.

Considering your relationship history, I hope it’s safe to say that you guys seem pretty close. I wanted to chat about what it’s like having a childhood best friend as a bandmate. What’s that dynamic been like?

BF: It’s at that point where Zach is just a brother now...even his parents are another set of parents. Sometimes you don’t even think about pushing boundaries...I mean, brothers just f*ck with each other constantly...it’s kinda not even a thing. I mean, we can be so pissed off at each other and just running through the motions but I don’t think either of us think about it.

ZS: Yeah we’ve known each other for so long and know each other so well that I think we both can tell how each of us are feeling. We’re close enough to tell what the other one is going to do or want to do…

ZS: Yeah, we get along pretty easily and if we’re not getting along we’re just like: ‘okay, I’ll see you tomorrow’ and we take our time it’s chill, no tension.

It’s at that point where Zach is just a brother now...even his parents are another set of parents.

You’ve talked in previous interviews about an Aussie band, Mother & Son, who got you into some ‘swampy 60s horror surf rock.’ Has this always been the direction of your sound?

BF: I guess you could say so? The only reason we coined surf rock was because we were listening to that swampy horror 60’s surf rock.

ZS: Yeah, that was definitely more of our sound in the beginning and we played a lot more like that, too. Eventually, we felt like we couldn’t really write those songs, so we started doing our own thing and I guess the surf rock sound hung around in some parts as we slowly started changing.

BF: The guitar tones were definitely more washy, reverb-y, splashy...and we’ve kinda still got that element even though it’s changed a lot. That [surf rock] coin sort of still carries on. And we surf too!

What do you think you two would be doing if you weren’t in music right now?

ZS: Yeah, I don’t think I’d ever go back. If this didn’t work out, I think I’d get a job somewhere and try and figure out how to be in another band or something...I don’t know.

BF: Maybe I’d be a painter! I wouldn’t mind being a painter.

Maybe I’d be a painter! I wouldn’t mind being a painter.

Navigating a bit into your newest single “I Missed Out”, talk to me about the track! It’s pretty heavy, where did you pull from in terms of lyricism?

BF: Well, Zach and I were on our way to a surf and he was sorta like: ‘hey, listen to this demo’. He had a little riff, which I thought sounded really cool. Eventually, we took it to a house that we have on the countryside and just flushed it out and played it as it was. It fell into place pretty easily.

ZS: Yeah it was really nice to just play a riff - I think the now three-piece instead of two-piece thing plays a huge part in that as well, where I can play an actual guitar riff and not have to play chords to make sure it sounds really full. Instead, I can just play a certain part. We’ve never really written a song like that, just pure guitar riff...it was a nice experiment we had going.

BF: Yeah it was one of those ones that just sounded really cool so we thought, hey, let’s just see how we can do it. By the end, it worked out pretty well so we’re quite happy with it!

ZS: Lyrically, there is no real story personally...I think it’s more about spending time on things that maybe you shouldn’t have, whether it be bumming around or spending too much time working and just not focusing on things that you should be doing in the meantime.

BF: It definitely comes to a lot. I mean, we can relate it to just us being away all the time as well, to pinpoint a personal thing. But, everyone takes a song the way they want to interpret it.

ZS: Yeah, that’s what we aim for, we don’t want to push our own stories onto people, we kinda want people to realize their own stories or problems.

Yeah it was really nice to just play a riff - I think the now three-piece instead of two-piece thing plays a huge part in that as well, where I can play an actual guitar riff and not have to play chords to make sure it sounds really full.

LISTEN: "I Missed Out" by Hockey Dad

You guys started pretty young right? I can definitely see where you’d apply traveling and being away a lot to this track.

And you recorded the track at Robert Lang Studios...which is absolutely wild! What was that like?

BF: It was great! We actually didn’t really know anything about it when we first recorded Blend Inn there. When we booked it, we booked it with John Goodmanson, ‘cause he’s done some amazing records and he was like: ‘yeah, let me organize the studio, I’ve got one down the road’. It was super like, ‘whatever’, okay, cool, that works. We get to Seattle and show up at this studio and we’re thinking by the looks of it that it’s pretty crazy...then we decided to look it up...we thought, ‘what is going on?’! We’re here now! So we decided to go back there. It was a lot of fun and it’s a really amazing sounding place.

ZS: It ended up working out really well for us - and the last record turned out great - so we thought: ‘if it isn’t broken don’t fix it’, we’ll go back and try and do it again. We felt a lot more comfortable in the studio this time as well because we had already been there, so we spent a bit more time focusing on other things...not just trying to find out, y’know, where the bathroom is. It’s a labyrinth in there.

BF: No kidding, we actually spent some time looking...it was wild.

And what about the music video for the track?

ZS: I think it definitely came from not having a specific idea...we found Greg Hodgson, who we met at a festival in Australia. He does projections for live bands which we thought was really cool and really, really good, we were amazed by them! Then we found out that he’s worked with other bands who are on our label [Farmer and The Owl] and some friends of ours like The Pinheads, he’d done their music video, and we thought: ‘let’s get in touch with this guy and get him to do something’.

We kind of wanted to put the emphasis on his work, so we kept it simple on our end and let him work his magic. We filmed it all on green screen and black and white screen and let him do his stuff [...] when the video kinda came out, we were stoked with it.

BF: Yeah, all of the accidents during the process seem to be the best moments for us. Greg said it the best himself, he said, “I can’t do the same thing twice.” He was just constantly tweaking it with analog stuff and it was all accidents! It fell together pretty easily and we loved it.

Watch: Music Video - "I Missed Out" by Hockey Dad

So, since the single release, fans have figured out that there is almost a pattern where you try and release music every two years, is this intentional? Does that mean we can look forward to a record?

ZS: Definitely this year. We’ve got a lot of new songs!

I’ll definitely be keeping my eyes peeled for that fresh new Hockey Dad content, and you should too! In the meantime, you can keep up to date with all things  Hockey Dad on their socials. Check them out on Facebook and Instagram, and stream their tracks on Bandcamp, Spotify, Deezer and Apple Music!