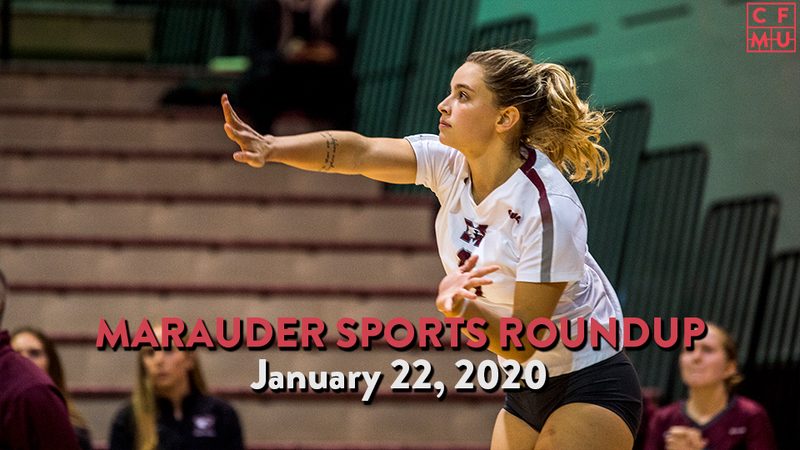 It’s a good time to be a Marauder fan. Well, that’s true any time, but today it is doubly true. In this Marauders Sports Roundup, I’ve written about 4 teams playing against the best competition in the country and not one of them is in a critical  spot. No matter what you choose to go watch, I can guarantee that you’ll witness the exhilarating sight of  Mac athletes absolutely playing their hearts out. I don’t want to get ahead of myself, so go on ahead to the article below, and get excited; it’s a very good time to be a Marauder fan. Like, Tropical Tornado good.

The women’s winning drought finally came to an end when the Windsor Lancers came to town for a mid-week matchup on the 15th. Gratifyingly, they were able to do something they’ve struggled with all season; gain an early lead and hold on to it. Mac played a dominant second quarter, with some clutch defence helping clinch a 70-52 win against a very strong Windsor squad. Just 3 days later, however, the old issues crept back in.

Mac came out fast against Western, putting up a 23-11 first quarter and keeping pace throughout the second. We bore unhappy witness to another night where the wheels just fell off the bus for Mac, though; their shooting and defence disappeared and Western was able to creep up into the lead. Mac was in this game right to the end, but Western carried all that second half momentum to a 72-69 win.

This team has been plagued all year long by inconsistencies quarter-to-quarter. Just one glance at the box scores from both contests could give you an idea of the pure talent on this roster. Sarah Gates had an incredible two-game stretch in which  she had 56 combined points and was named the OUA Athlete of the Week. Olivia Wilson showed off some great versatility against Windsor, continuing to play strong in the paint while also knocking down some nice mid-range shots. Christina Buttenham was back after a scary injury in a recent game against Ryerson, playing dynamic on both ends. Top-end talent is not the issue here. Neither is the talent behind them. The bench is loaded with very capable players.

This is where I run into some confusion. All the pieces are there to win games, but this team just hits stretches where they can’t seem to put it together, which gives their opponent the opportunity  to steal the game. The outlook is grim after dropping 4 of their last 5 games, but keep the faith! Everything is there to put it all together; we just have to wait and see if they can hit the mark in the crucial late portion of the season.

Men’s Basketball is Bad for Your Heart

Another week, another heart-stopping pair of games from the men’s basketball team. Adding to my cardiac distress, Mac suffered tough losses in both games against Windsor and Western. The Marauders got caught down 21 to Windsor in the third quarter; from there, the game exploded into one of the most exciting fourth quarters I've ever seen.

When a team is down 21 points near the end of a game, you wouldn’t exactly call it finished, but the hay is pretty much in the barn. Against Western, the Marauders kept pace early but hit a lull in the third quarter, before rocketing back to almost retake the game. Behind some awesome players that look calm in clutch situations, Mac is never out of a game. If you follow the blog, then you’ve seen me write about how good Jordan Henry and Connor Gilmore are, and (no surprise) here they are with 26 and 25 points, respectively.

Not to mention that Henry took a bullet pass square in the face and rushed back into the game with his team down late. Outside of those two, Kwasi Adu-Poku is becoming a physical presence in the middle, with an impressive 10 points and 10 rebounds versus Windsor. Damiann Prehay also adds some toughness on the offensive end. He  plays a hundred miles an hour every time he’s on the court and, regardless of his production, that adds a lot to a team’s momentum.

All this to say: I love the talent on this team. It seems like every week a new player is ready to take over and become the spark plug they need; out of nowhere, Mike Demagus had one of the most incredible sequences I’ve ever seen during the third quarter of the game against Western . Depth on a roster is so critical to a team’s long-term success, and this team has that in spades. Despite two losses this week, this team is built to succeed.

The Marauders were at home for another back-to-back set of games this weekend. First up was Ryerson, with an OUA best 10 wins. Mac snagged a 25-23 win in a tight first set. The momentum swung towards Ryerson in the second; they were able to pull together some nice scoring runs and took it 25-12.

Mac showed good rally in the third by making some nice scoring runs of their own, and with Jessie Nairn nailing straight points to help seal it, Mac won the third 25-19. With Ryerson down 2 sets to 1, Mac had a chance to ice it in the fourth and played very competitively. The Marauders were down just 1 at 22-21 before Ryerson strung three points together to win the set and tie up the score.

Mac started strong in the final set, winning 3 of the first 4 points. Unfortunately, Ryerson came back with  another volley of scores and won 10 of the next 13. Ultimately, Ryerson sealed the afternoon with a 15-9 win.

Calling this game a McMaster loss would be a great oversimplification. Let’s compare  this game with the team’s win against Trent the next day. Trent only has one win on the season, so I’ll just give you the skinny on this one: Mac won every set by a double-digit margin and dusted Trent in every single stat category. Put both these performances together and what do you get? A big smile on your face. The smile comes when you realize Mac is bulldozing weaker opponents and becoming a real headache for the top-end teams. If there’s such a thing as a good loss, then the Ryerson game was one. This team should be encouraged by how much trouble they gave one of the best teams in the country. So smile, volleyball fans, because things are very good.

Men’s Volleyball is Too Good to Talk About

I will now sum up men’s volleyball in a haiku:

Can anyone stop this team?

My guess would be no.

The men’s volleyball squad is by far the most dominant team playing at Mac right now. They added to their wall of pelts this weekend by absolutely mulching Ryerson and Trent. At first glance, the individual sets from both games look close, but Mac came out 6-0. This team has a real skill: staying in charge of a game’s flow and momentum. Never getting away from their fundamentals, playing consistent, and just being  more talented than everyone helps. Unfortunately for me, them being so good makes it very hard to find anything to nitpick. On the show this week, I ranted about this team only being #5 in the national rankings. A bump up to #3 this week has me a little less sour, but c’mon! This is the best team in the nation, and they’ve got the resume to prove it.