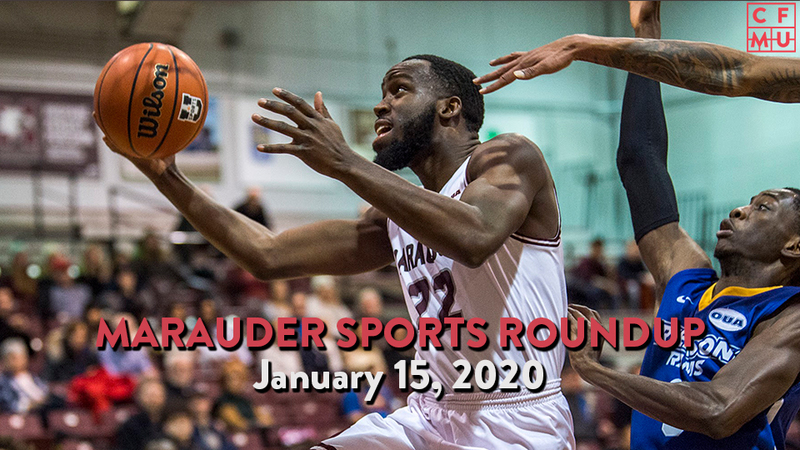 It’s a new year! Woohoo! As we all hit the gym to lift, swim, and treadmill our way through that list of resolutions, so too will our Marauders return to the gym for a new season of competition. Basketball and volleyball in particular are both hitting the ground running this winter. Now is the perfect time to jump into Marauder fandom if you haven’t already! If you’re feeling behind, I wrote this handy article here to get you all caught up. As always, I encourage you to see as many games live as you can, Marauder fans, because going to watch volleyball and basketball technically counts as going to the gym more.

And that’s not all coming to DBAC can help you with this January, oh no! Say, for instance, that your resolution was to eat better. Well, don’t ya know? There's a Booster Juice* right by the gym, and that has fruit and stuff! So come out, have some fun, and knock a resolution or two of your list.

(*Disclaimer: This article is not sponsored by Booster Juice, I just like it. I’m all in for the Tropical Tornado.)

Men’s Basketball, a.k.a. The Comeback Kids

The men’s basketball team didn’t have to wait long for their first trial of 2020. Ryerson came to town on Wednesday, looking to knock the number 7 ranked Marauders down a few pegs. The conversation about Ryerson men’s basketball has to start, in my opinion, with Centre Tanor Ngom. Ngom is a 7’2’,  with beautiful footwork and a great shooting touch. Ngom, along with a supporting cast of phenomenal athletes, presented a tough challenge for the Marauders.  With Ngom locking down the paint, Mac moved Forward Connor Gilmore outside, looking to create some open shots from the perimeter. The strategy was looking genius  through the first quarter . Gilmore knocked down his first three attempts from deep and (along with great shooting by the team) kept Mac in the lead. Unfortunately, Gilmore went ice cold from three after the first quarter and, with his physical interior defence missing, the Marauders were unable to adjust  quickly enough. The Marauders were able to stay within striking distance on the backs of Gilmore, Jordan Henry, and emerging third star Sefa Otchere. The third quarter proved to be the killer for the Marauders, when Ryerson went on a scoring tear that put them up by as much as 18. In the end, they landed a 98-90 win for their efforts. Give credit where it’s due to the Marauders, though! They did play a fiery fourth quarter that almost put them back in the lead by the game’s end.

Saturday’s game at York had a lot in common with Wednesday’s game – at first. Mac once again played a solid first half and was leading  by 1 at the break. Mac once again let their opponent take the lead in the third; this time, York went up as much as 14. Faced with another fourth-quarter rally, the stars came into play. Jordan Henry broke for 17 second-half points, 23 total with 6 assists and 5 rebounds, and  also added a go-ahead dagger on a layup with just a few minutes remaining, which gave the Marauders their final lead. Connor Gilmore played more inside and added 12 points and 8 rebounds; Sefa Otchere put up 16 and 5 rebounds. Behind that offensive firepower, Mac stole one from York on the road with a final score of 83-82. These Marauders look incredibly poised playing from behind late. These close wins will matter heavily when playoff time comes around and Mac looks in position to make some serious noise.

Women’s basketball also played two games against Ryerson and York this weekend, but with somewhat less success. On Wednesday at home versus Ryerson, things got ugly in a hurry to the tune of 84-46. That score pretty much says it all, but since 4 digits makes for a pretty short article, I’ll get a bit more into it.

In short, Mac got blown out on the defensive end. The Marauders tried a new, uber-aggressive press style of defence, attacking the ball on every inbounds and trying to lock down Ryerson’s ball handlers before they could reach half-court. In theory, this defence is used to interrupt the flow of your opponent’s offense and force them into bad decisions. In pro basketball, you’ll see this strategy used situationally, usually when a team is down near the end of a game. In university basketball, it’s not unheard of to run press as your main defence, but it is incredibly fatiguing and risky. Because press is so aggressive, it can break your defence in a big way, leading to wide-open lanes for the opposing team’s  shooters. The score can get run up quick, especially up against a team like Ryerson, whose starting five is loaded with great athletes.

Mac is not going to beat anyone off athleticism alone. That’s just not who they are. Their advantage comes from the wealth of experience in this line-up. Four of five current starters played significant time during last year’s championship run; they’ve been a part of a great team and know how to play to win.

Speaking of veteran players, I want to call out a particular moment from Wednesday’s game. In the third quarter, with the game already slipping out of the team’s grasp, starting Forward Christina Buttenham came up limping after hard contact. She stayed in the game for a few minutes; when she waspulled out, she rode an exercise bike for a bit and  then just got right back in the game. She was favouring one leg and was clearly in pain. Kudos to Christina for her drive, but it does nobody any good if your veteran lynchpin blows out a knee in a 40-point blowout. If this season is going to be salvaged, these veteran players need to be in top form.

The offence put up 76 points in regulation on Saturday at York, which was an improvement. The Mac defence, however, once again struggled with  inconsistencies. In the second quarter, they only let through a meagre 9 points, showing their impressive ability.  In the third and fourth, though, they seemed to fall apart, allowing in 31 and 27 points respectively. They managed to hold on, taking York to overtime. Unfortunately, they came up short in the extra period for a final of 91-84. This marks 4 straight losses in a season that is quickly getting away. Many of this team’s issues can be traced back to an inability to close out games in  the lead. Mac lost a few key playmakers from last year to graduation. This  season, they need to identify players to fill those roles as quickly as they can.

Mac women’s volleyball went back-to-back against Lakehead this weekend and left no doubt as to their strength. Across two days, Mac won six straight sets against the Thunderwolves - each one by 10 points or more. Dominating every statistical category on both offence and defence definitely makes a nice start to the new year. Leading the way was Rebecca Maxwell, who played two great games and was named Athlete of the Week for her efforts. These are the kinds of wins you really like to see; beating an opponent with consistent play. In what is quietly becoming a very good season for the squad, they are now 3 games over an even record. However, the road doesn’t  get any easier from here. Mac is up against Ryerson next weekend, the owners of the league’s best record, and Trent the next day. Two straight back-to-back weekends can be taxing for a team, but if they can stay strong  and focused, I’d like to see this squad give Ryerson a run for their money.