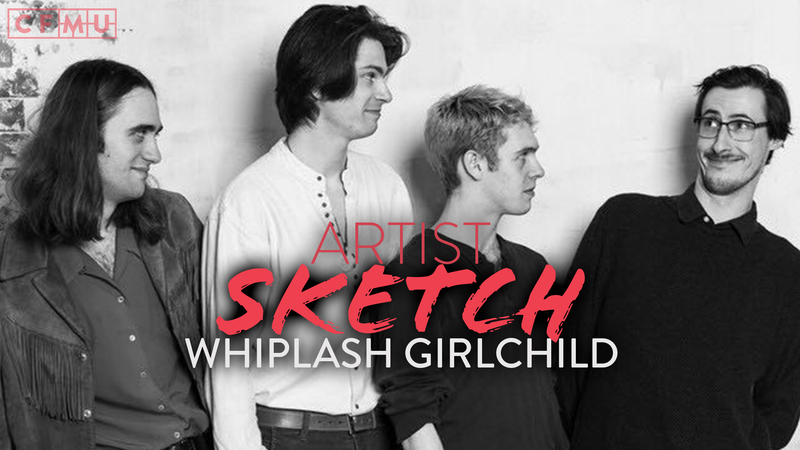 In early October, I attended a show at Corktown Pub with a few friends. Some fantastic local acts on the bill drew in a great crowd, but there was one band in particular that made them stay.

Whiplash Girlchild consists of vocalist Lucas Tennon, guitarist Devon Pelley, bassist Alex Forciou and drummer extraordinaire, Nathan Smofsky, (obviously). Their anticipated return to the city fast approaches as they prepare for a show on December 23rd at The Casbah.

After experimenting with his sound, Tennon’s solo project became an amalgamation of talented Toronto musicians who produce ‘folk-punk for the people’, by combining poetic lyricism and folk bard influences with wondrous sonic intensity. Generating buzz by playing shows in the Toronto scene, Whiplash Girlchild signed to Hamilton based-indie label Maisonneuve Music, where they recorded and released their first few tracks.

Sitting with these folks was an absolute treat. Their banter, energy, and genuine connection with one another translates directly into this four-piece band's performance. Without further ado, I’m so excited to introduce Whiplash Girlchild. 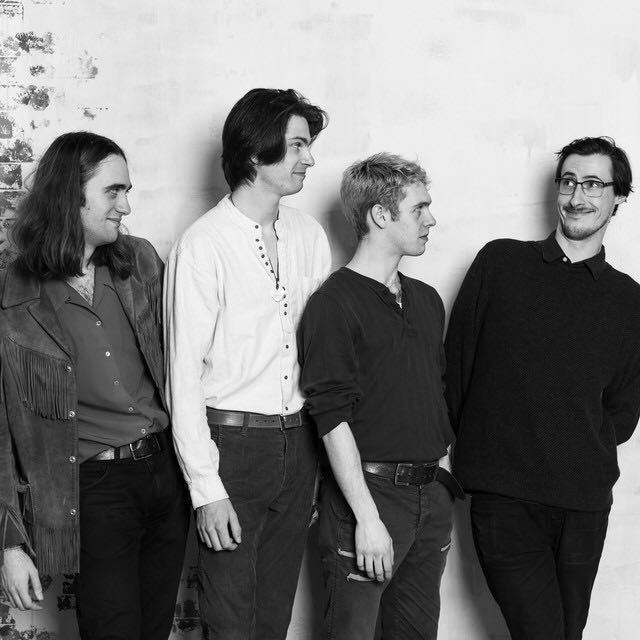 Give me a short background on how you met, how the band formed, and how long you've been making music together.

LT: We all started playing together about a year ago. I put together an “incarnation” of Whiplash Girlchild which consisted of me and a few jazz musicians from Humber College who left collectively to start their own Jazz ensemble [...] Around that same time we all met through playing in bands in the city and everyone sort of swooped in and saved the day...we’ve been playing ever since.

DP: We all met through similar circles playing music, I had joined Alex’s band Passport Radio, a Toronto-based rock band…

DP:...Nathan had known I’d been playing music for a long time and then I started helping Lucas out with some stuff. [...] A lot of timelines overlap.

LT: People were coming and going but ultimately it just felt so much better to do it with these guys than anyone else I had played with, and so we solidified this as Whiplash Girlchild.

NS: ...So basically these three guys were floundering and wouldn’t have been anywhere without me, Nathan Samophsky, passport radio, 4.9 uber rating...

DP: On that note, I think above any caliber of technical ability, chemistry trumps that...you have to be good at what you do but all of that doesn’t matter if you don’t get along.

LT: Yeah, when you have similar sensibilities it makes the creative process so much more fulfilling and productive...It’s gotta be fun.

NS: To add, the four of us have been playing shows together not even that long...I joined the band in March so, not even a year.

People were coming and going but ultimately it just felt so much better to do it with these guys than anyone else I had played with... 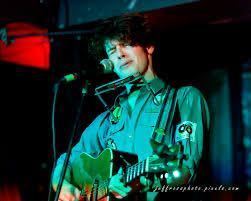 Your last few shows were in October...and Corktown Pub was your first show in Hamilton, what was that like?

DP: In a different city where the majority of the people are strangers...and you have strangers coming up to you saying: “wow, I really appreciate what you’re doing here, I really enjoyed it” versus people that you might already know saying: "hey, great set!" is a really different feeling.

LT: I feel like when you play to a room of people you don’t know, it's kind of like when you go to a new school and you can reinvent yourself...there aren’t really many expectations and nobody really knows what’s coming - also, everyone was so nice! People coming up and talking to us afterwards, not wanting a quick interaction but actually wanting to chat and ask about us - I really felt like I made a lot of friends.

DP: There’s no incentive for them to do that either, except for y’know, that night right? So it makes it a lot more genuine.

It seems there’s a lot of genre bending in your music - how did you find your distinct sound?

LT: Genre bending came from like “indecisiveness” - there is a wide variety of music that I listen to - I feel like there is a character or a voice that comes through independent of the energy level and I really respect that and being able to cultivate that and that’s definitely something that I can’t sort of channel into one plane and I feel like that’s important.

DP: I think it’s timing too...if you look at fashion and you look at, I don’t know, most facets creatively and socially, everything is sort of blended together with such open access to information. If you look at things like Spotify or Google you can look at the history of what people were into...you have access to every genre or song that people were into so it’s become super easy to let everything seep into what you’re doing.

I feel like when you play to a room of people you don’t know, it's kind of like when you go to a new school and you can reinvent yourself...there aren’t really many expectations and nobody really knows what’s coming.

NP: I’d say there are two different sets of influences individually and overall as a band...as a band?

LT: I think our influences are always changing - they’re all over. Our name comes from a Velvet Underground song...Lou Reed has always been a base influence, trying to combine rock music with some auteur poetic lyricism.

NS: Individually, we all have staples that have been our biggest influences but there’s also a constant switch-up...I mean right now I’m not really listening to all of my influences at all times. I’m really slow to the discovery of ‘new music’ and I’ll have a group of four or five bands that I’m drawing inspiration from.

LT: The first time I went to Hamilton was to meet with Maisonneuve Music and one of the first questions they asked was ‘what is your core song,’ value wise [...] at the time I said So Far Away by Carol King... every word is exactly where it should be, it seems all of the words just landed there, the simplicity and craftsmanship is something I look for everywhere.

Tell me about the 21 EP - was it a group project or a solo project? How are you feeling about it now that it’s done?

LT: It started as a Whiplash project while we were on the cusp of a lineup change, so it was more or less a solo thing...or sort of a writing exercise. I feel way different about it now than when I was in the middle of it. It was a lot. I’m the kind of person to get really excited about starting something, and I wanted to be the person who would follow through with it. I learned a lot about time management through it, it was really tough and at times and I was really frustrated. At one point I fell behind and my dad kind of reminded me that I was falling behind and I remember being so angry about it and dwelling on it for three days and then realizing y’know, I made a commitment and I need to do it. So I don’t know if there is one answer to how I feel about it, but it was an intense time.

DP: That’s interesting because that’s family...it makes me think about how you can get people asking, y’know, where’s your next album or your next release and I feel like I’d have that reaction to people asking...it’s almost like I’m living and trying to create and sometimes creativity isn’t always up to you. People expect things from you if they’re people that care about you, but sometimes it’s nice when people care about you and it pushes you.

NS: What I like about the 21 EP speaking from the outside [...] is that it’s pretty wide span musically...sonically, it’s pretty different. There are some songs that are a little more rock-influenced versus others that are stripped down, it’s a good span of range.

Would you say there is one track that you connect with the strongest on the project?

LT: I’d say 55mm, it’s the first one on the 21EP and it’s gone through a lot from that recording, to bringing it out and playing it with these guys, to actually recording and for me it felt like the battering ram of a new musical phase.

NS: I can connect to that... when you put out the version of 55mm on 21, it was around the same time we were talking about me joining the band and that was really exciting. It’s sort of this really exciting song that matched how I was feeling about the band.

DP: For me, probably Doll House. At the time, Nathan and I were playing in a different band and doing a Basement Session, they’re these great sessions you can find on YouTube of local bands coming in and doing a live set...we had just finished ours and Lucas had come to spectate and he brought his guitar [...] He pulls me aside and asks if he can show me this thing he’s been working on, so we go into the alley and it’s rainy and wet and he showed me Doll House on an acoustic and explained where he was at while writing it and to me, in terms of songwriting and inspiration from real life [...], I would say that one is the one I can connect to the most.

Your lyricism is extremely poetic. Do you all contribute to the writing?

LT: I usually write the lyrics but then we all sit and come up with arrangements together.

LT: Bringing something in that’s bare bones always makes it conducive to our sound because that way everyone gets to contribute.

DP: Lucas will kind of come in and be like...hey man...let me show you this thing I’m working on...

Your next show is happening in the New Year. What’s in the works as of right now?

LT: We have new recordings but we can’t make any promises as to when they’ll be released. 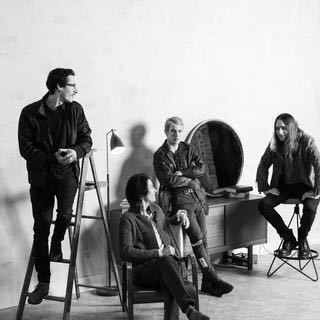 I’m really looking forward to what this talented group of guys releases in the future; but before then before then, give their most recent releases a listen here!

Be sure to catch Whiplash Girlchild playing in Hamilton with Emma Beckett and local bands Tripper and The Wild Things and Sundried Whales on December the 23rd at The Casbah. Step one: check out the event page here!