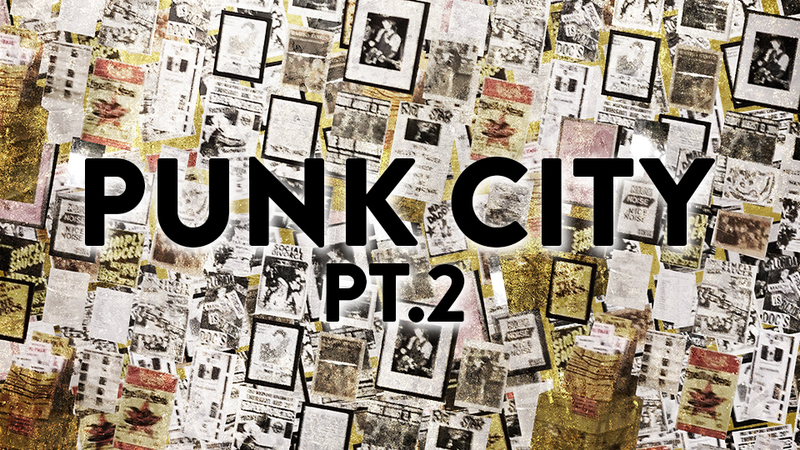 This is a multi-part article. Part 1 provides an introduction to Punk City and Hammer City Records. Part 2 provides a rundown of the walking tour. Part 1 can be found here. 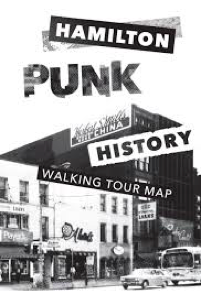 Punk is often considered a subculture that rejected the mainstream ideologies and attitudes of society while emphasizing raw forms of self-expression. In the streets of London and New York during the early 70’s, freedom of youth was lyrically represented by artists such as The Pistols, Patti Smith, The Stooges, Richard Hell, and Siousxie and the Banshees. On Sunday, October 13th,2019, local musician Chris Houston announced before leading a walking tour through musical history:

In the early 80s, Houston was part of the Forgotten Rebels, notable for their song “This Ain’t Hollywood.” As a teenager living in the downtown core of Hamilton, Houston experienced the punk subculture firsthand. He, along with several others who frequent Hammer City Records, agree that Hamilton was a major breeding ground for punk culture. Tara Bursey, along with Punk City co-organizers Drmay and Caron, organized two walking tours over Punk City's inaugural weekend, which focused on Hamilton’s punk heritage. Enthusiasts from all over the area met downtown on either Saturday or Sunday afternoon to learn about the key sites that contributed to the birth of punk in Hamilton.

Located on the north side of Gore Park, Duffy’s Rockpile (now a Money Mart) was once Hamilton’s preeminent music club. Originally a tavern hosting classic rock bands like  Rush and Max Webster, Duffy’s transitioned to a more punk influence in the late 70's. Iconic performers of the era  included Zappa, Teenage Head, and the Rebels themselves.

As we passed by the corner of King and James St. North, Houston declared that King & James Convenience was previously home to Star Records, or “ground zero for punk rock in Hamilton”. Star Records was an independent label operated by Mike Shulga . Interestingly, it was the number one import location for punk records in Southern Ontario. It also hosted the Ramones for a meet-and-greet before their performance at Burlington’s Civic Arena in 1980.

Bannisters was a discotheque in Hamilton that enjoyed popularity until late 70s, when the audience for disco music began to dwindle. In order to adapt to youth culture, Bannisters began to focus more on showcasing punk bands. Located at 95 King St. East, it is now Mills Hardware.

Back in the 1970s, King St. East, or “Stereo Row” if you were a teenager during its prime, was lined with Hamilton’s many grand instrumental, record, and stereo stores . According to the Hamilton Punk History Map, published to accompany the walking tour, the youth culture of the time was  “fueled on music magazines boasting the sounds of rock’s new medium”. Streaming from Hamilton’s steel mills, kids spent their hard-earned cash roaming the streets of Stereo Row. Many of these stores remain vacant, with a hidden history unknown to the average pedestrian. 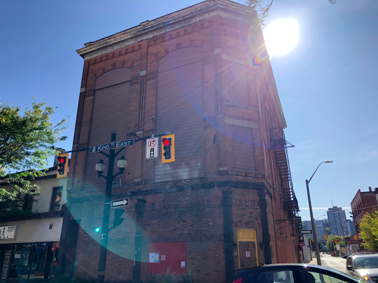 Vagabond Saints, previously Spring Street Studios, is where the Forgotten Rebels recorded their debut album “Surfing on Heroin”, self-released on cassette and EP.  Chris Houston, who developed and led the tour, is the bassist from the Forgotten Rebels, a punk band that developed a sizable presence in the 70s. 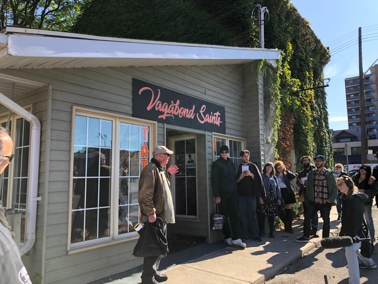 Although the mall contributed to the later gentrification of Hamilton’s inner city, the outdoor space was once a surprisingly popular venue for live punk shows.

Teenage Head is a Canadian punk group that originated in Hamilton during the early 80s. Before fame, they performed a legendary free concert on the Jackson Square rooftop that attracted a crowd of over 100 listeners. One major talking point at the launch party was gentrification in Hamilton today.

“Over the past nine years, I've seen galleries close, I've seen artists and friends just move from this street to other areas, and unless you send out a carrier pigeon, you will never find some of them. They've just moved out because rents have doubled and tripled, and it's now some really bizarre street where there is no day traffic, it’s all geared towards your restaurants,” said Craig Caron, co-organizer of Punk City and owner of Hammer City Records.

In other words, the artistic movement that punk rock encouraged has been struggling to maintain itself within a consumerist environment. Before Hamilton’s de-industrialization, the steady work and high wages in Hamilton’s steel industry allowed the cultural ecosystem to take shape.

“ Punk is, at its absolute best, a completely accepting space and cities have become contested grounds where we kind of feel like outsiders in a city that we have contributed so much to...I don't want to be too nostalgic but I think about being a teenager and the kind of excitement of punk rock, the excitement of mid or large sized cities, and the opportunities that the city holds for creativity. You, hear that kind of party-line from developers a lot - it's true - and that's what's so painful about the language that they use. But this is the way that we see it, and with Punk City we are able to honor what's special and important to us and remind ourselves, remind each other that we belong here,” says Bursey.

Punk City installments become particularly important in this context, as they are a reminder that Hamilton is home to many local creators.

At the time of publishing, the next initiative in planning for Punk City is the next Punk City weekend, Punk City #2: Punk Identity which will run over January 10-12. The event page can be found here. Hamilton punks, save the date!

Anyone reluctant about coming to any Punk City event need not worry.

“if you're feeling nervous, DM one of us, message us on Facebook, Instagram, whatever, we are more than happy to talk to you a bit about it, make you feel better about being here, make sure that you know that this space is for you, just as much as it is for someone that's been a part of the community for 10,15, 20 years,” says Sid.

Punk City events are contingent on public support and unity. The more voices contribute to the conversation around their events, the better they can become.

“Punk is a really incredible thing, identifying as a woman, and thinking about the kind of woman I have always wanted to be. I'm interested in having punk be a vehicle for self-empowerment. When I think about all the aspects of punk that I love from music to art, that is the catalyst that inspired my entire life as an artist. I identify as an activist as much as an artist these days. If it wasn’t for punk, I probably wouldn’t have the sensibility or boldness to even go there. Punk is the ultimate empowering space, it's incredible, and I have it to thank for everything, probably, so many successes really," Bursey said.

Punk is so much more than a genre of music; it is an artistic form and a way of life. Punk creates a community that is accepting of all individuals and although sometimes intimidating, it is also beautiful. Hamilton, a home to many people supports a growing community of punkers living amongst the gentrification. If the thought of gaining a new perspective on Hamilton as a whole excites you, Punk City is just the thing to try out.