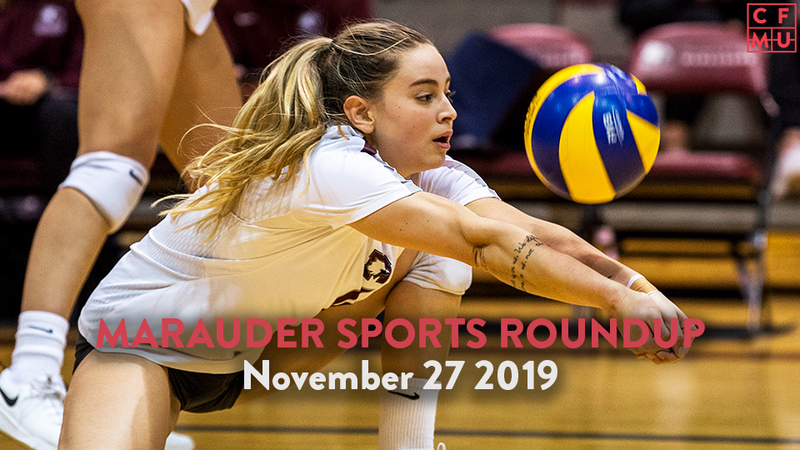 Toughness is something that often gets overlooked in sports. People might mostly  talk about in terms of  contact sports like football and rugby, but toughness is key in any sport. Talent is everywhere when you get to this level, so it takes mental toughness to get your team to a win. The Marauders have shown toughness, time and time again, and the ability to win consistently against top OUA competition. It breaks my heart that we have to go on a break for December, because it seems as though every Mac team is playing at a high level and only getting better; four of our teams are in the top 10 nationally and show no signs of slowing down. The Marauders are on a roll as the fall semester ends and I can’t wait to see what they do in 2020.

The night was all but over for the Marauders late into the fourth set of Friday’s match with Waterloo. The teams traded wins through two sets, but Waterloo took the advantage with a 7-point win in the third. Waterloo kept their momentum into the fourth, when they were up 24-22 on the Marauders, just one point from winning.  Mac bit back, winning 4 straight points to even the score at 2 each. They completed the comeback with a 15-12 victory in the final set. This win evens up Mac’s record at 4-4 going into the winter break, the same record they had at this point last year. They’ll look to build on wins like this one when they return from the break. They showed great improvement since losing late in the game against Toronto last weekend, pulling off a clutch victory against a Waterloo team that was first in the OUA last season.

The men’s volleyball squad dominated from the start in their bout with Waterloo, winning all three sets including 10-plus point wins in the last two. They put up 49 points compared to just 25 by Waterloo. The Marauders only got better as the match wore on, altogether a smooth victory for a team that has cruised through the competition so far this season. The squad is 7-1 in conference play and has won five straight games;they’re now in their third week in a row as the number 4 ranked team in the country.

Now that the season is on hiatus for the break, they’ve got a long stretch of time off, as does every team. With this kind of pause right in the middle of a season, it can be tough for a team to pick up right where they left off. Especially for a team that has so much positive momentum going for them right now. Can they continue their strong run throughout the season? We’ll find out when they return in January, but as it stands, they are dominating the OUA.

In a cross-division battle with the Nipissing Lakers, the Marauders made their presence felt in the first half of a 74-48 win. The first quarter ended with both teams tied  at 15, but Mac soared  in the second. By halftime, the Marauders had gone up 29-19 on the back of a 24-4 quarter. In that quarter, Mac shot 47% from the field and held Nipissing to 2 of 17, including 0 for 8 from the three-point range. Leading the way was veteran Forward Christina Buttenham with 8 points and 2 steals in the period, en route to a season high of 24 points. The final half was well-contested by the Lakers, but that wasn’t enough for them to  overcome the deficit they had racked up in the second quarter. As a team, Mac did an excellent job of getting the ball and holding onto it, registering 20 steals and 3 blocks while turning the ball over just 7 times. It was a comfortable win for the Marauders, but the dominant box score hides yet another second-half drop off for this team. Mac has lost a game in which they were up big at half time twice already this season: once on October 30th at Brock, and again on November 9th versus Guelph. In both those matchups, Mac fell apart after the half, scoring numbers dropped dramatically, and what should have been statement wins against rival teams turned into bad losses in the blink of an eye. In this game, Mac went from shooting 45% in the first half to just 32% in the second. They still put up a good number of points and, most importantly, did get  the win, but if not for the huge second quarter and even worse play from their opponent, things  could easily have gone the other way. This is becoming a scary trend for a superbly talented Marauder squad. All the pieces are there for this team to make serious noise in the OUA again, but it is going to take mental toughness along with talent to make another deep run. The good news is that if anyone can do it, it’s this team.  However, with 2 losses already on their record after losing just 3 a year ago, the pressure is on for this team to get this glitch ironed out. When Brock comes to Burridge Gym for a rematch of that October loss, they’ll get a perfect opportunity to show what they’re made of.

Saturday night ended in  yet another win for a Men’s basketball team that is on a roll. In a season with a lot of wins, this one stood out. The Marauders played what was, all things considered, their strongest  game of the year. Right from the start, they  exploded out of the gate with a 26-16 quarter. This would prove to be the difference in the game, as the remaining three quarters saw both teams within 5 points of each other. Mac stayed strong and held on for a 90-86 win. Five Marauders ended with double-digit scoring nights and fourth year player Kwasi Adu-Poku added 12 rebounds. Mac’s season has been highlighted by the play of stars Jordan Henry and Connor Gilmore, but on a night where they played ‘solidly’, but not their usual ‘awesomely’, the rest of the team stepped up. Mac shot very consistently around 40% through all 4 quarters and showed grit and toughness. This is an awesome sign for this team. As I’ve said before: stars are a great thing to have on your team, but eventually they will have a slow night, so depth is crucial. With players like Ezichi Kalu, Damiann Prehay, and Tistan Lindo coming off the bench and playing like starters, this team has showed they have no problem with depth.

Mac entered this contest as the number 7 team in the nation. However, I’ve got beef. After the win, they fell 2 spots to number 9. Huh? Most of the teams ahead of Mac make sense. Teams like Laurentian, which Mac lost to earlier in the week and of course undefeated teams Carleton, Dalhousie, and Calgary occupy the 1 through 3 spots respectively. The root of my displeasure lies at the number 6 slot: Lakehead. The Marauders beat Lakehead twice just a month ago and have an overall better record. The ranking is just a number this early in the season, but pride matters. This team is playing the best basketball of anyone in the OUA right now and they deserve the recognition to go along with it. Consider this an official complaint against the USports ranking committee.