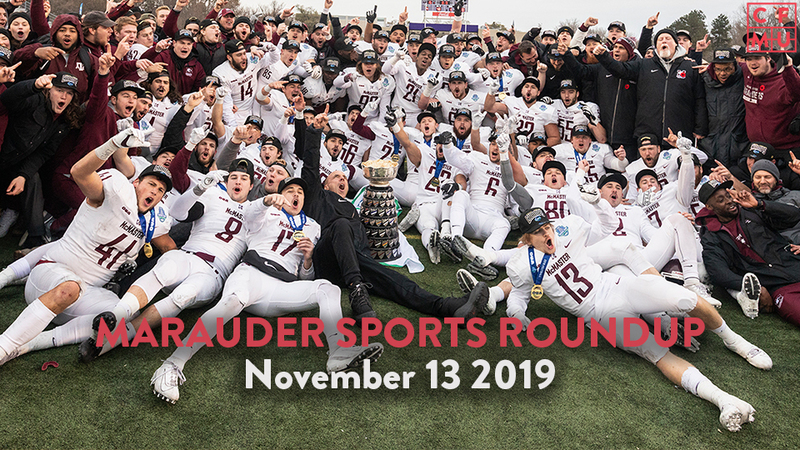 Have you ever watched Planet Earth?

Specifically, I’m thinking of those videos of frogs catching bugs. I love those videos; the frogs just sit around all day while other animals are running after their prey. The frog waits and waits…until it can snatch an unsuspecting bug out of the air with its tongue. It’s gross, but also fascinating.

Mac is like the frog (stick with me). There are bigger, louder, and scarier school teams out there, but when the moment of truth comes and a team underestimates the Marauders, they’re ready to snatch a win. This year, we’ve shown an incredible ability to win as the underdog (underfrog?) in big games. We don’t wow you with anything fancy; we just…win.

This week was no different, with some teams staking a claim to big prizes on big stages, and others pulling off strong victories early in the season.

Be patient, even with the teams that lost. They’ve got what it takes to win; they’re just waiting for their chance to strike.

Western might have been the king, but McMaster was the ‘king-slayer’. In the single biggest football game for our Marauders in 8 years, the team put together one of its gutsiest performances. The Western Mustangs were undefeated in OUA games going all the way back to the 2016 Yates cup, a streak that we are unlikely to see again for a long time (at this level).

The first quarter was somewhat disastrous for our team. They turned the ball over three times to open the game, leading to a 10-0 Western lead at the end of  the first quarter. However, OUA MVP and veteran Mustangs leader Chris Merchant, who was already playing on a bad ankle, took a big hit at the end of the quarter and was knocked out of the game. Western backup Kevin John came into the game, but he was unprepared for the Mac defence after only throwing 16 yards in the regular season. 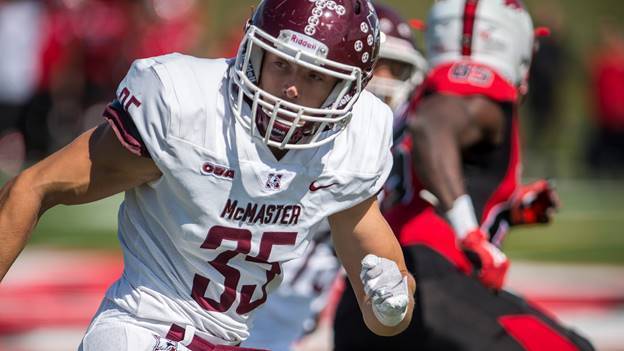 The dominant Marauder defence came to life in the second quarter, allowing only 9 total yards and no scores while adding 2 safeties. The offence also recovered well from their early mistakes, scoring twice on the ground with Justice Allin and Matt Krason. Andreas Dueck controlled the game for Mac with 238 yards. There were no touchdowns on the day for him, but that was more a function of the game plan than any lack of effort on his part. The Marauders never let John and the Mustangs get into any sort of rhythm, with 6 sacks on the day. They were led by linebackers Eryk Bujalski and Nate Edwards, who had one each. The defensive backs were on lockdown all day, with interceptions from Noah Hallett and Josh Cumber. Mac only surrendered 3 points down the stretch and walked out of London with a well-earned trophy. This is the Marauders’ first Yates since head coach Stefan Ptasek’s last stint with the team, when they won in 2011. That was also the year they captured the Vanier.

Mac now gets another week of football; they’ll go cross-country to Calgary to take on the U of C Dinos in the Mitchell Bowl. This game acts a semi-final for the Vanier Cup National Championship, which Mac certainly has its eye on. 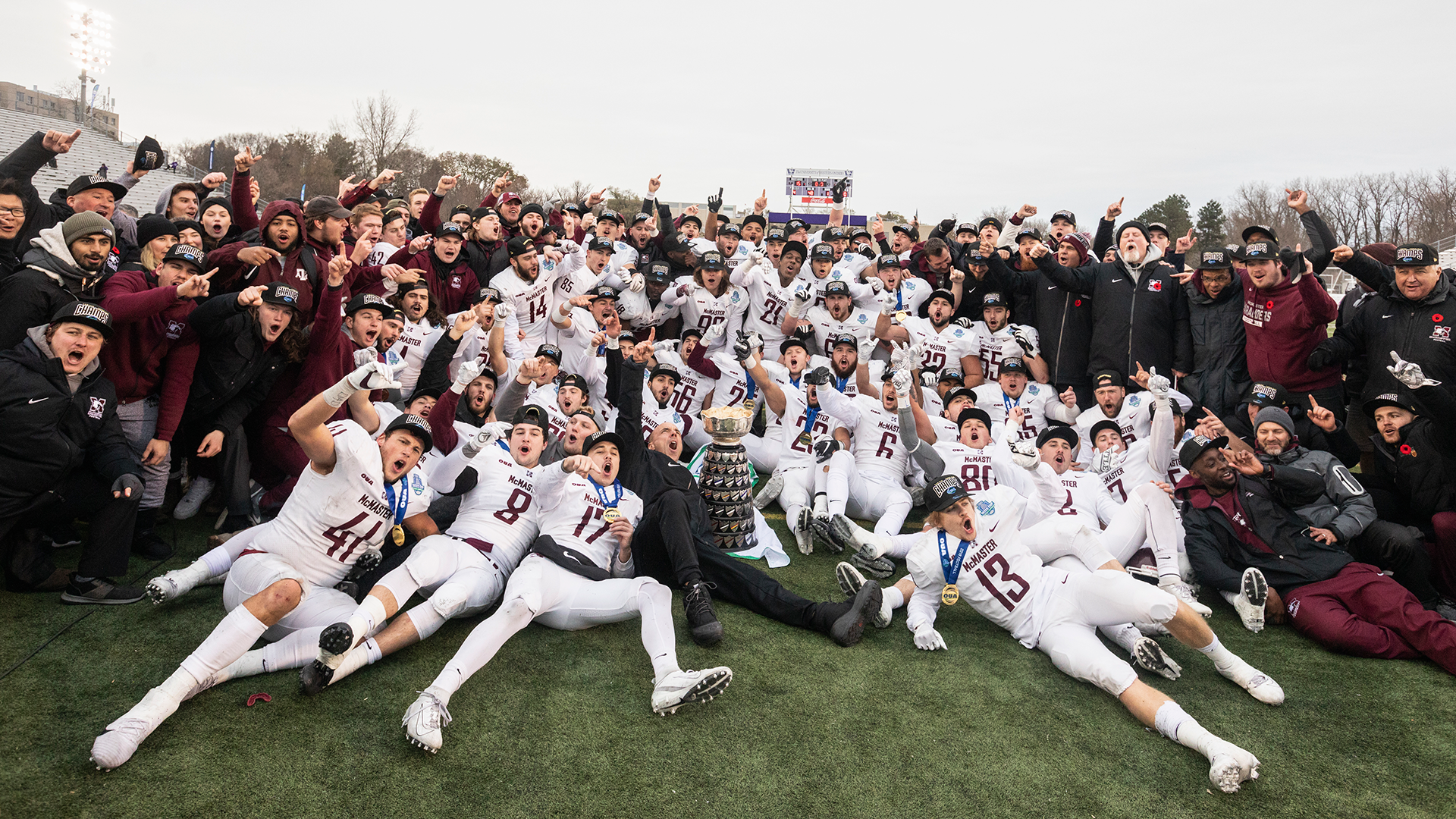 Following a fittingly spectacular ceremony celebrating their 2018 National Championship win, the women’s team squared off against the Algoma Thunderbirds. It was the first home court action in conference play for the team since winning the national title, and the Marauders dominated accordingly. After a tight first quarter, Mac outscored Algoma 29-9 in the second; the match was sealed from there. The Thunderbirds never were able to come close to Mac again; in the end, they  lost 79-56. Four Marauders had double digit points: Christina Buttenham, Sarah Gates, Olivia Wilson, and Arianne Soriano. The Mac defence was dominant physically, led by Buttenham’s 5 rebounds and 5 steals.

The second game  of the weekend, in which the Marauders welcomed the Guelph Gryphons into Burridge gym, didn’t go so smoothly. Gates and Mia Spadafora led the Mac offense through an on-fire beginning period. Shooting almost 40% from 3, the Marauders took a 4-point lead going into half. After halftime, though, the shooting game fell apart. Mac only made it on 3-pointer in the 2nd and made just 6 of 32 shots total. Guelph out-rebounded Mac by a wide margin and exposed their defence in the paint. Then, they took a big lead in the fourth and, sadly, there was no coming back for the Marauders. 92-60 was the final. This game followed the same script as last week's tilt against the Brock Badgers: a strong first half followed by an almost inexplicable collapse in the second.

I said it after that game, and I'll say it again: dominating for half a game isn’t good enough against tough competition. To pull off a win, a team must finish strong; there’s a team across from you that is just as hungry for a win, and they have no reason to back down. With that being said, this team has every key to break away from this trend before it becomes a pattern. They are a well-coached squad, with smart veteran players who have experience winning at the highest level. This is a team ready to win- now’s their time to prove it with consistency. 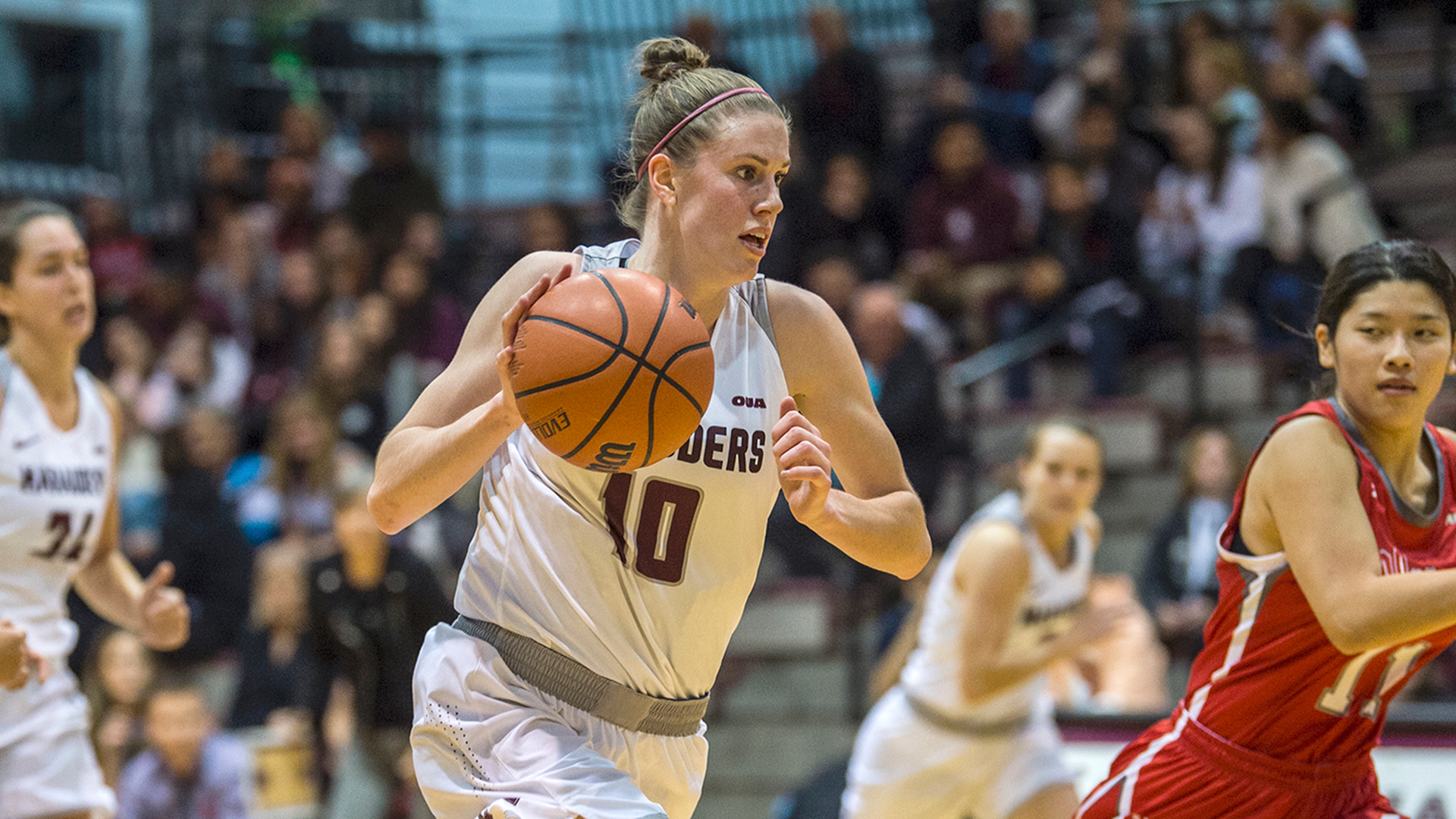 The men’s Algoma game was much the same as the women’s game. Algoma never once led the Marauders in what turned into an 83-53 victory for Mac. Five different Marauders put up double digit scoring numbers, with Connor Gilmore and Tristan Lindo both going for double doubles. Freshman Forward defensive star Ezichi Kalu came off the bench with 12 rebounds and 3 blocks. Mac struggled to find their rhythm shooting from deep, but they would more than make up for it the next night.

Saturday’s bout with Guelph was tight through the first  quarter, with Mac up just one point. But Mac stole this game from under the Gryphons with explosive second and third quarters. Jordan Henry was back with another 25+ point night, his 3rd in 4 games. Tristan Lindo matched Henry’s 27; both shot very well from the 3-point range. Overall, the team  was  excellent with their shots, going a combined 46% from the field and 83% at the free throw line. Connor Gilmore’s16 points and 13 rebounds added another double double to the mix. Gilmore’s gritty and physical playing is holding down the interior for this team, which cannot be understated. All told, Mac rocked Guelph for a 95-75 win, no complaints here. 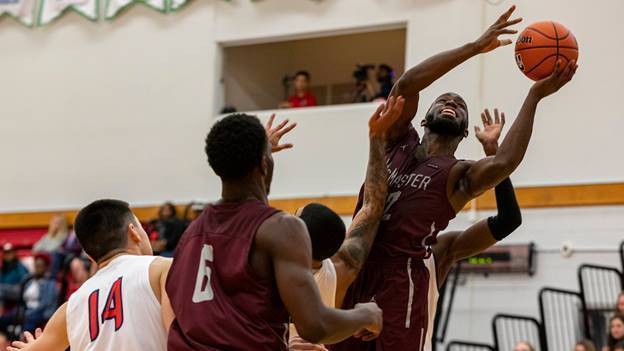 On Saturday, the cross-country teams made the trip east to Kingston for the U-Sports National Championships. All-Canadian runners Alex Drover, Max Turek, and Andrew Davies once again powered the Men’s cross-country team to glory. All three placed in the top ten en route to a silver medal finish for the men’s team. The defending national champion, the University of Calgary Dinos, were the only team to outpace the Marauders. Local rival Guelph, who beat Mac out for the gold medal in the OUA championship two weeks earlier, was locked in a tie with the Marauders  for 2nd place at 82 points after 5 finishers each. However, Marauder Evan Ubene pulled ahead of the Guelph runner to steal the silver from the Gryphons and his own brother, Mitch Ubene. This marks a step up for the men, who won bronze last year.. Also trending upwards was the women’s squad, led by captain Caroline Forbes. Forbes moved up 47 spots from her finish last year, coming in at 27th overall. As a team, the women also improved two spots, finishing 13th in the standings. 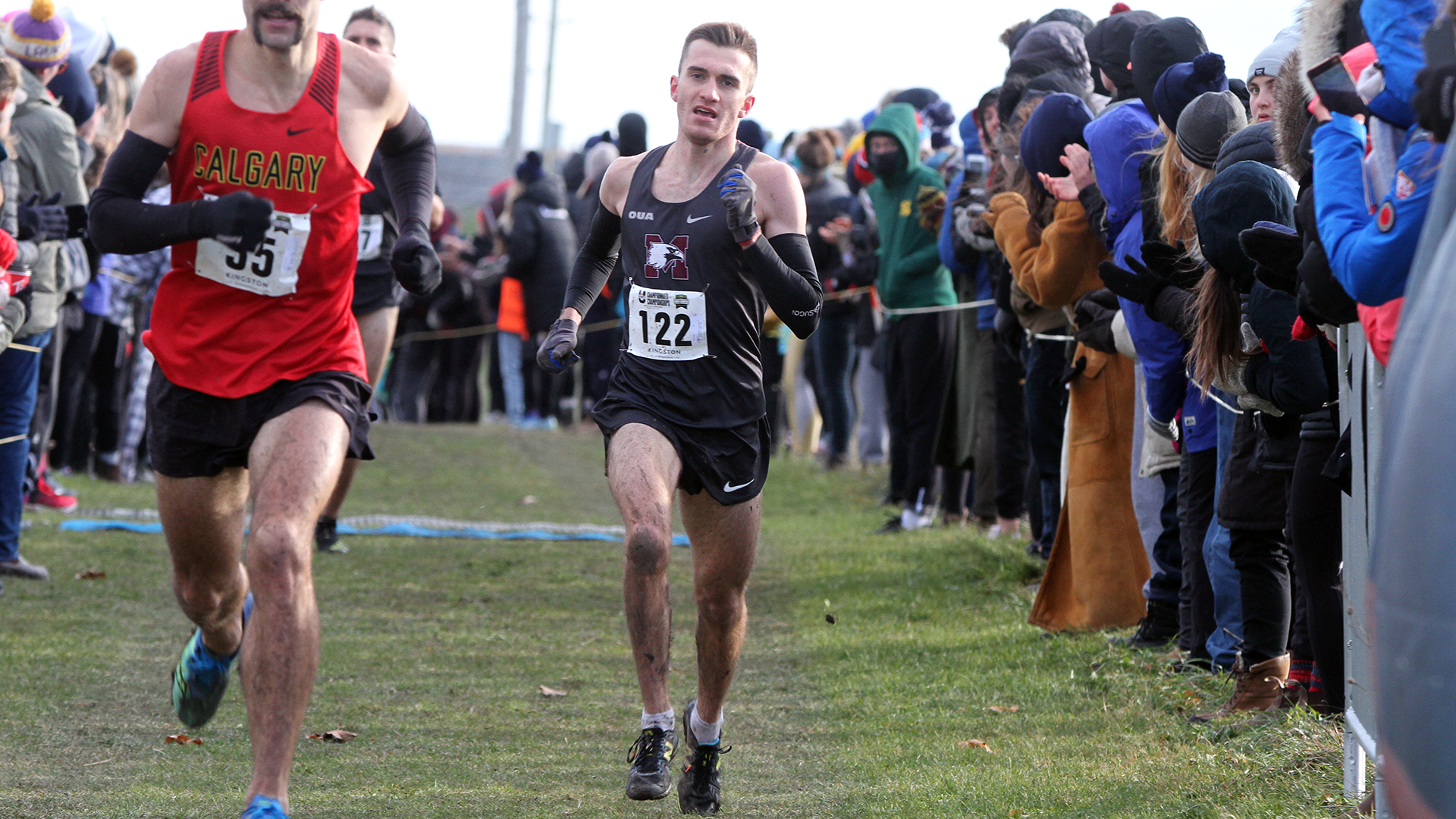 Basketball and volleyball will both be at home on Saturday playing the Toronto Varsity Blues. It’s an all-day affair; volleyball starts at noon, with basketball staring later at 6. Go Mac Go!