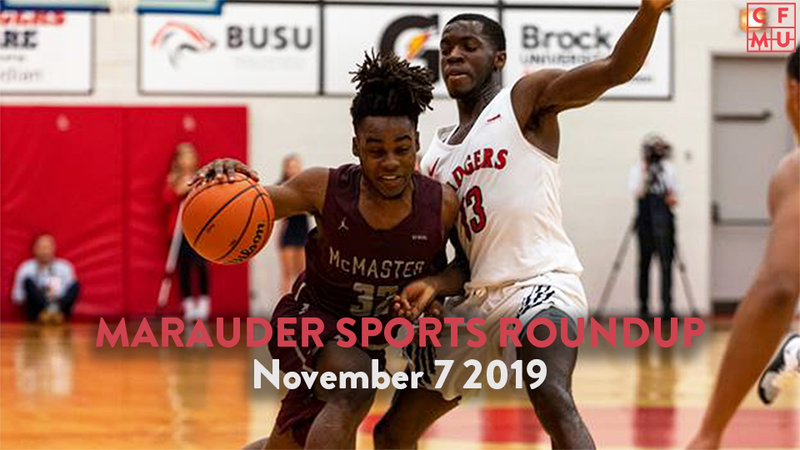 The one thing November has going for it, though, is sports. With fall sports winding down and winter sports just getting started, there’s a wealth of events to get out and see. Football is rolling, basketball and volleyball are ramping up, and there’s plenty more to fill your plate. So put away the costume, take off the premature Santa hat, and wipe away those tears; sports are here to walk you through the dark days. Welcome to November, the golden days of Marauder  sports.

Brock was able to keep  the Marauder men’s basketball team at bay for three quarters Wednesday night. As a team, the Marauders shot well below average, just 26 of 67 on the night. However,  guard and rising star Jordan Henry took over late in the game to rally Mac to a 74-72 win. After a career-high 29 points against Lakehead a week ago, Henry put up 26 and 6 rebounds on the Brock Badgers. A few stellar plays by him cinched   a win; a clutch rebound and subsequent 3-pointer put Mac up 69-66 late in the game and then a clutch free throw right at the end finalized the result. Henry  broke  the 20-point barrier  twice last season and  has done so twice in three games this year. My advice: keep an eye on Jordan Henry as the year goes on. With a couple of signature games already behind him so early in the season, he’s only going to get better.

Another player that stood out Wednesday was forward Connor Gilmore. Gilmore landed a double-double on the night, putting up 13 points and 10 rebounds. He also did some great work defensively; 8 of his 10 boards were on the defensive end and he  also threw in  a blocked shot. Other players on the squad had decent  numbers, but took  too many shots to get there. The Marauders looked off from the three-point range as well, hitting 6 of 23 shots. Although the percentage was down from last week, Mac has done well at the charity stripe in the few games they have played, hanging around 70% as a team.

More than any other sport, basketball is a game of individual stars. And while having a top-level star can definitely be a game changer, depth will be what gets you wins night after night. Especially when your stars aren’t on the court.

Case in point: Saturday's matchup with Canisius College. Jordan Henry had the night off as men’s basketball took a trip down to Buffalo for some international competition. The Marauders responded with a much better night for shots, but fell off in some other areas as they took a loss 81-71. Mac was dominated by Canisius in rebounding and, despite shooting well when they had chances, Mac wasn’t creating those chances. They got 36 shots all game compared to 64 by Canisius. Sports can feel like whack-a-mole in that way, sometimes. Crush one  weakness, and another one presents itself.

That’s all part of growing as a team, though. Better to get some of those problems ironed out in these non-conference games than have them cost you more late in the year.

More than any other sport, basketball is a game of individual stars. And while having a top-level star can definitely be a game changer, depth will be what gets you wins night after night.

The Marauders seemed to be heading for a clean win in the early stages of the women’s basketball matchup against Brock Wednesday. Jenna Button had 16 points in the first half, pushing  Mac to a 40-31 lead at the break. Unfortunately, things only got worse from there. Like a Sprite you left open on the counter too long, Mac had gone flat. Just 6 minutes into the second half, Brock had made up the deficit and taken the lead. Once the momentum had been lost, Mac was never able to get it back. Their shooting percentage dropped from 40 in the first half to just 24 in the second. Jenna Button was held to just 3 points and got into foul trouble late in the game, ultimately fouling out. Marauders Olivia Wilson and Christina Buttenham did both manage to record double-doubles, but outside of that the team looked overmatched in the back half. Inevitably, the Marauders will be down in a game again this year. Being a team that can finish games strong or swing momentum is crucial in a basketball season. Nobody in the OUA is going to hand Mac a win, so persevering in these tight games is a key moving forward.

Mac had the  chance to show a better side in front of a home crowd Sunday against the Southern Connecticut State Owls. This one was back and forth early on , but the Owls built up an 8-point lead midway through the third quarter and looked ready to run away with it. Then, a fire alarm went off in the gym and we were escorted out of the building, players and all. The game was put on hold for about half an hour as the fire department worked . After coming off a momentum-killing game at Brock, I really couldn’t think of a bigger momentum killer than being made to stand in the cold for 30 minutes mid-quarter. However, Mac exploded out of the jarring stop  and came within 4 at half. Showing excellent growth in just a few days, they continued clawing back after half and took the lead midway through the third. This one remained close to the very end, but Mac looked poised and smart all the way through. Wilson continued her great work on the board by adding 12 on the night, but the star of the game was Sarah Gates, who contributed  35 points to  a team total of 61. This game will likely serve as a great morale boost going into the conference home opener on Friday.

Being a team that can finish games strong or swing momentum is crucial in a basketball season. Nobody in the OUA is going to hand Mac a win, so persevering in these tight games is a key moving forward. 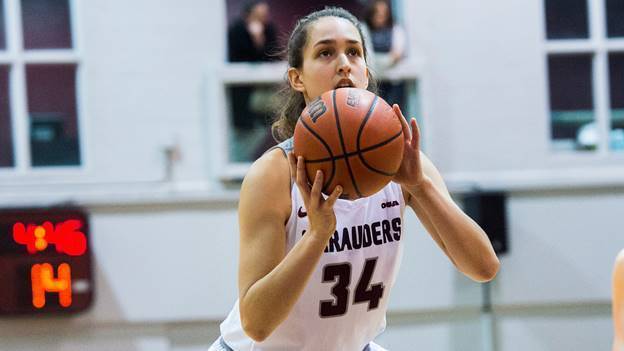 The Marauders and the Guelph Gryphons faced off on Saturday. The stakes: the winner would move  on to the Yates Cup, the OUA’s football championship. Mac was in control of this game from the start. The effort was led once again by the fantastic play of QB Andreas Dueck, who broke out his running skills for 89 yards, including an electrifying 55-yard touchdown that made the Gryphons look silly. Justice Allin was also back doing work on the ground, racking up 93 yards on the day. On the defensive side Mac stuffed Guelph; they allowed  just 260 total yards and 1 touchdown. Defensive back Lucas Bill added to Guelph’s misery by snagging two meaningful interceptions from Guelph QB Theo Landers. Special shoutout  to linebackers Nate Edwards and Eryk Bujalski, who combined for 16 tackles; Edwards added a sack. They controlled the game at the second level and stopped any potential big play in its tracks. Mac had Guelph’s number from the start, and never let them get close to taking the win.

A dominant victory such as this doesn’t leave much room for speculation, so instead, here's what McMaster Head Coach Stefan Ptazek had to say after the game.

“This demonstrates that the right choices have been made for several years. From recruiting to fundraising to all the positional coaches and things that have been in place, and the development of the first-year kids who are now my fifth-year seniors...I'm proud of the eight months we spent. I'm not naive to the fact that we had some great pieces and so there's been lots of great decisions over several years to get us here,” were his words.

McMaster will now face defending back-to-back Yates champion Western for the title. Western hasn’t lost a regular season bout since September of 2016. Make no mistake, though, they are not invincible. If not for a bad interception thrown by Waterloo QB Tre Ford last week, Western would have likely lost that game. Earlier this season, Mac played Western and was only a touchdown behind before falling apart in the fourth quarter. The key to that game was Western’s 232-yard rush that broke  Mac’s  defence. If Mac can control the ground game and continue to shut down passing attacks, a Western victory could be in jeopardy.

I'm proud of the eight months we spent. I'm not naive to the fact that we had some great pieces and so there's been lots of great decisions over several years to get us here. 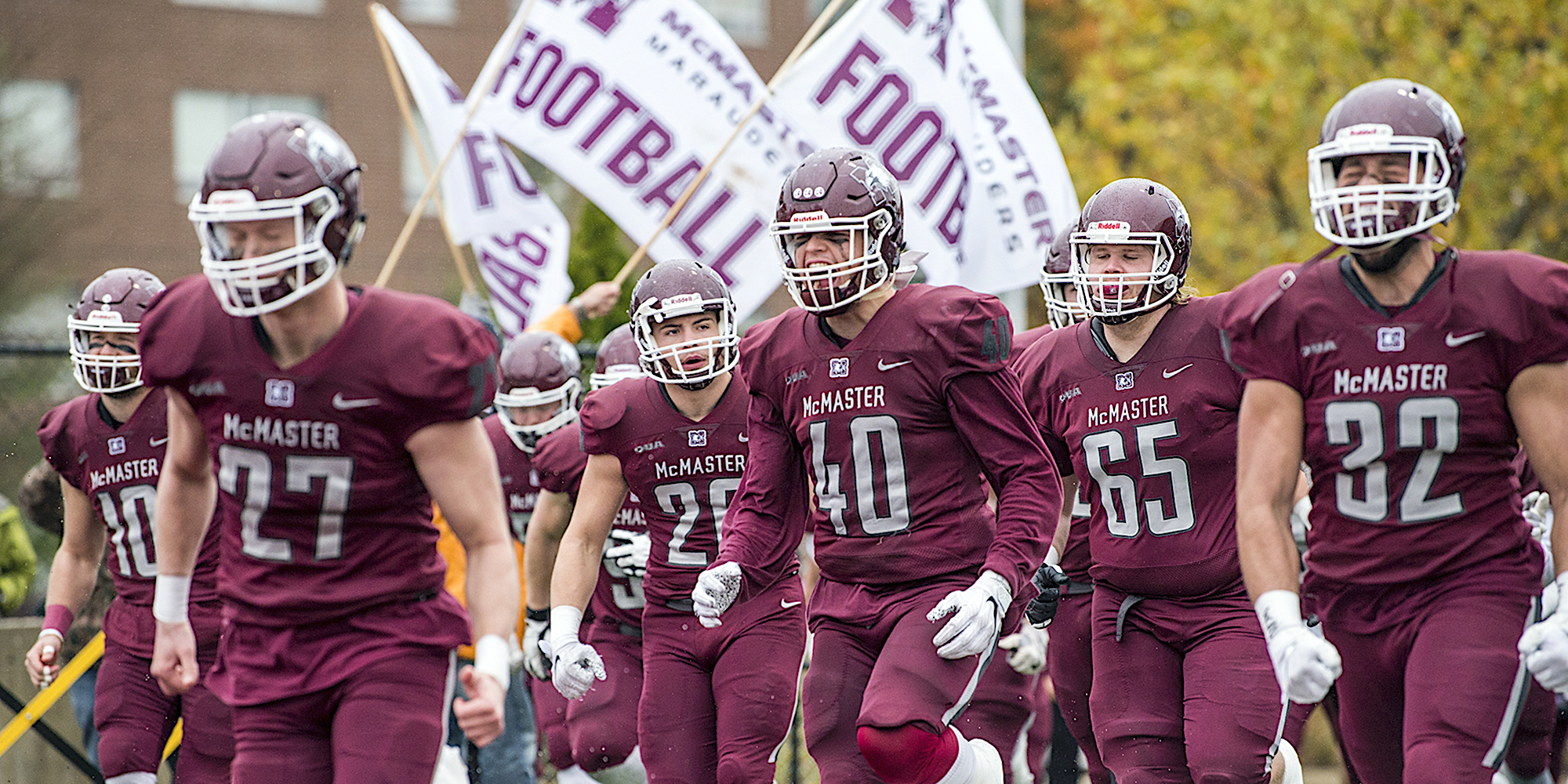 The OUA announced award winners this week! The Marauders were well-represented, with 2 major awards and 7 all-star selections. Claudia Continenza and Christian Cossidente both took home the Community Service Award for McMaster. Continenza started 13 of 14 games for the women’s team. Off the field, she was team representative to the McMaster Athletes Care program and worked with the Women’s Athletic Leadership Council. She was also a volunteer coach for  high school and club teams. Cossidente was also an active member of the McMaster Athletes Care program, where he worked on Mac’s Think Pink, #NoGoodWay, and Bell Let’s Talk campaigns. He also worked on the Varsity Leadership Committee. In other news, Anand Sergeant and Stephanie Roberts were named to the OUA West All-Star first team. Hannah Chau-Stacey and Carling Goold made second team on the women’s side while Matt Monteiro, Yordan Stoyanov, and Dusan Kovacevic made it for the men. Congrats, everyone! 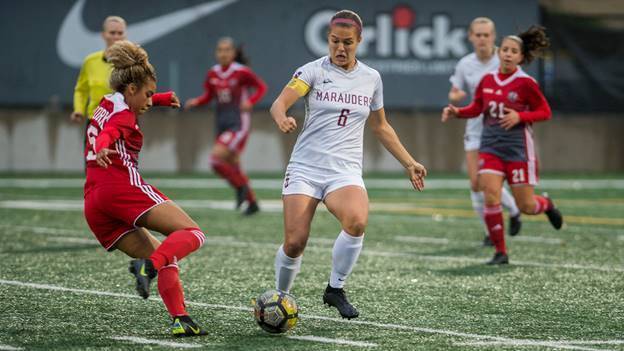 Duncan Simmons is the CFMU Sports Director and a 3rd year communications studies student from Vancouver, BC. He is the author of the Marauder Sports Roundup, released weekly on Wednesdays. Lover of all sports and all sports fans. Contact him at: cfmusport@msu.mcmaster.ca.