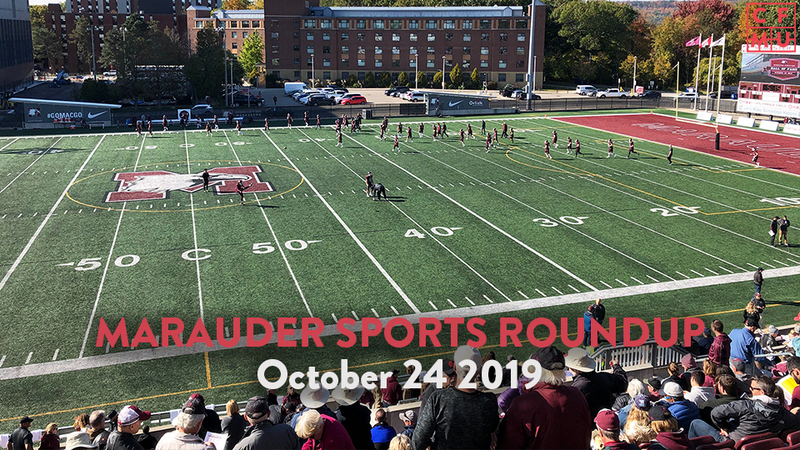 Have you ever gone on a walk to the corner store for an ice cream? You leave the house with a spring in your step, imagining that delicious frozen treat. Then something bad happens - maybe you twist your ankle, or the cool kids drive by and throw eggs at you. You’re downtrodden now, but  you can see the store’s fluorescent lights, shining ahead. You can almost taste the ice cream, so you push on. And once you have your cone, you forget all about those kids and realize the walk was actually pretty great.

Well, that's what sports is like. You set off on a season knowing bad things will happen, but you do it all for the promise of a championship waiting for you at the end of the road. As the fall sports season comes to a close, several teams are finished or hitting the final stretch of their schedules. That metaphorical ice cream of victory is up for grabs (and real ice cream…if they have a nice coach).

The football regular season is over, and we have a down week before the Marauders play a semi-final against the winner of either the Waterloo v. Ottawa or Carleton v. Guelph games happening this weekend. So, in  the downtime, let’s step back and try to paint a picture of the season so far.

The breakout star of the offence this season has been quarterback Andreas Dueck. Dueck started all 8 games this year and put the offence on his back with a league-high 200 completions. That’s 32 more than the next guy and just 3 completions short of the record set by Asher Hastings in 2015. Dueck was 2nd in the OUA in yards and touchdowns, trailing only Toronto’s Clay Sequeira (who plays on a team with 1 rushing TD all year, just sayin’). Andreas Dueck has been incredible, but what’s a quarterback without the pieces around him?

The position group most closely associated with  the quarterback is the receivers, led by the do-it-all trio of Tommy Nield, Tyson Middlemost, and Xander Tachinski. All 3 finished with yard totals within 100 yards of each other and were not far off on another in the other stat categories, which  is a great  indication  of how they’ve operated on the field. Any one of them can go short, over the middle, or way deep on any given play. Many receivers at this level have one skill that they are especially good at, and not much else to rely on. Because these Marauder wideouts can do it all, they’re that much more powerful – and dangerous.

But what’s a passing game without a ground attack? Similar to the receivers, the rushing is handled on a committee basis. Jordan Lyons and Justice Allin were the main ballcarriers. The runningbacks made an impact even on a relatively small number of carriers; Allin and Lyons finished the regular season 3rd and 7th in yards per carry respectively. Their greatest game was the final of the season, where both ‘backs went over 100 yards and got a touchdown. That game was also the last regular season game of senior Jordan Lyons’ stellar career at Mac. He e finishes number six on the all-time school rushing leaders list and 10th on the touchdowns list.

Now, the big men. The offensive line, at times, looked like one of the most dominant groups in the OUA. There’s not a wealth of fancy stats to throw at you for these guys, but chew on  this one: 432 total yards per game, good for 4th in the OUA. That doesn’t happen without a great o-line. When the line is good, the offense is good.

...Well, that's what sports is like. You set off on a season knowing bad things will happen, but you do it all for the promise of a championship waiting for you at the end of the road.

Dominance. Not much else needs to be said about the Marauders D. But since you did me the favour of clicking on this, I’ll throw you a bone. Let’s run through some stats: Mac finished in the top 3 in points allowed, sacks, and rush yards allowed. They finished number one in pass yards allowed, total yards, and interceptions. It seems unfair to single out just a few guys in a defence that was awesome top-to-bottom, but a few players really stood out.

Eryk Bujalski, Eric Blake, and Nate Edwards make up the linebacking corps that does a little of everything- tackles for loss, sacks, interceptions. They can be anywhere at any time to make a play. When put together with great depth on a defensive line that gets after QBs every week, opposing offences have definitely looked confused and lost at times.

The defensive ‘backs have also locked down prolific passers all year, led by Noah Hallett’s 4 interceptions that  contributed to a league-high 14 interceptions. I look at the Toronto and Waterloo games as great examples  of this season-long dominance; two of the OUA’s best quarterbacks, Clay Sequeira and Tre Ford, looked like different players when they took on the Marauders. Catching a QB on a bad day is one thing, but Mac rendered passers useless week in, week out.

The Marauders are hot; 6-2, the #2 seed in the playoffs and a #4 national ranking, and still ascending. If all these great pieces can play the game that they have been playing all season, there’s no reason to believe they won’t be around deep into the post-season.

If all these great pieces can play the game that they have been playing all season, there’s no reason to believe they won’t be around deep into the post-season. 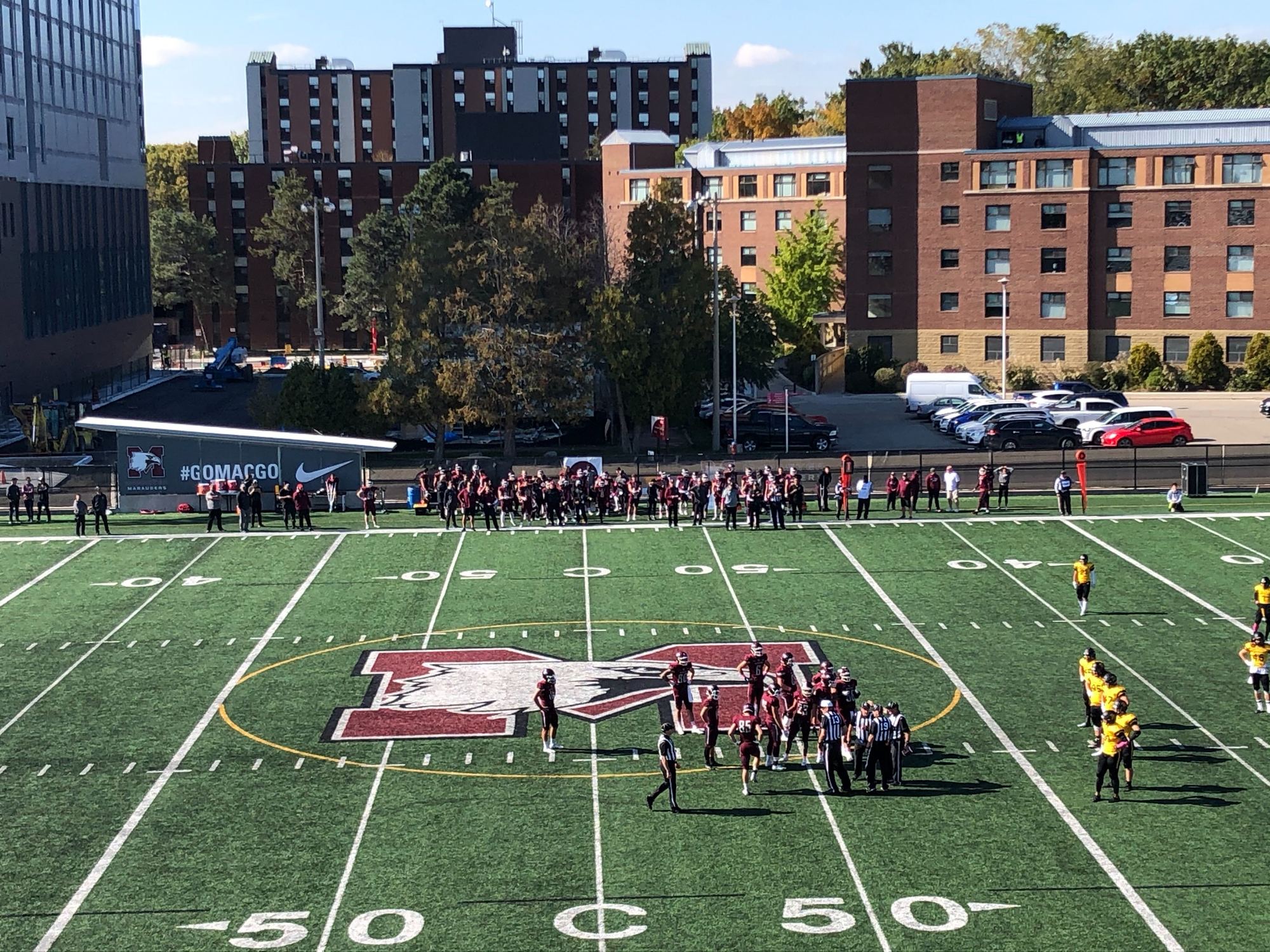 Women’s rugby wrapped up their season with a 41-3 win over Brock that netted them a bronze medal. The team fell short of a shot at gold last week in a rematch of the season opener versus Guelph. 3rd place seemed a long way away after two brutal losses to open the season. But with the help of some players coming off injury, Mac flipped their season on its head in dominant fashion, going on a good run that included wins of 24, 96, and 71 points. The Marauders have a lot to hang their hat on this season. I wrote a more in-depth article about the women’s rugby team a couple weeks ago that you can check out here [http://cfmu.ca/posts/340-women-s-rugby-sets-the-bar-high-on-and-off-the-field] for some more details on  all the great stuff they’ve accomplished on (and off) the field.

3rd year scrumhalf Alissa Zhang received a Community Service award for her work off the field, making this the 4th out of 5 years that a Marauder has won the award. Forwards Katie McCleod and Taylor Price were named to the OUA all-star team, the first career all-star selection for them both.

Men’s soccer has had an up and down season so far , but they’ve only gotten better with time . It all culminated on the weekend with a 5-1 statement win over Brock. Yordan Stoyanov, Antonio Sereno, and Antonio Sereno all scored one goal apiece; Joseph Guidny nabbed two. The win moved them up to fourth in the OUA West and set them up fora home game versus Western for the first round. Mac has a  much better record at home than on the road this season, winning 4 of 8 at home compared to 1 of 6 away.

The women’s team also took on Brock with 4th place on the line. Tied late into the game, the Badgers scored the game’s only goal in the 71st minute, robbing the Marauders of the possibility of a home playoff game. Both teams put up similar shoot numbers and fouls, but Mac was unable to capitalize like Brock did. Like the men, the women’s team has been better at home this season. However, they have won against tough opponents on the road before. McMaster’s opponent is TBD, but they will have to pull off an upset, no matter what.

What to Watch This Week

The rowing team heads to the OUA championships in St. Catherine’s this weekend.

Volleyball opens their season at home on Saturday against Western and on Sunday versus Windsor. Both games start at 6pm in the Burridge gym.

Basketball starts OUA play on the road versus Lakehead, playing back-to-back days on the weekend.

Duncan Simmons is the CFMU Sports Director and a 3rd year communications studies student from Vancouver, BC. He is the author of the Marauder Sports Roundup, released weekly on Wednesdays. Lover of all sports and all sports fans. Contact him at: cfmusport@msu.mcmaster.ca.