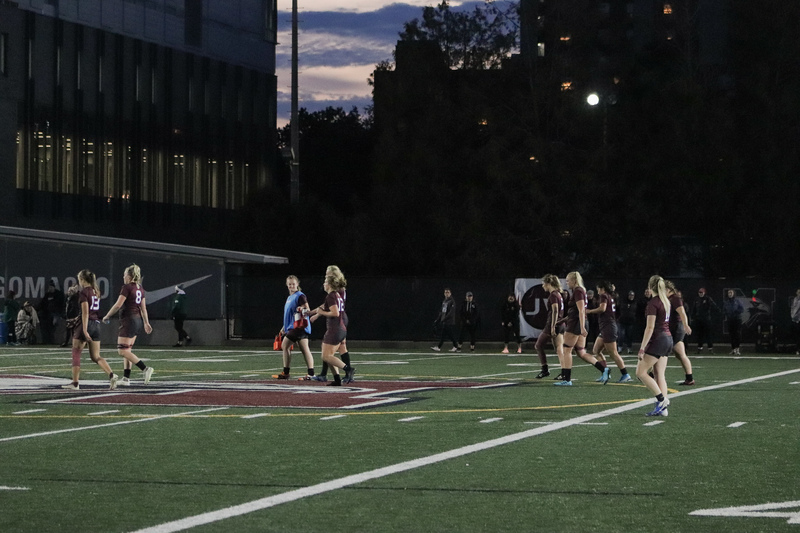 With the McMaster rugby women heading into a playoff semi-final at Guelph this Friday, it’s high time we  look back on their season so far. You may have seen them dust Western 96-0 in their September 29th match, or cruise past Trent 71-0 in the playoff quarterfinal last week. But what is truly special about this McMaster squad is something  you probably haven’t seen:their commitment to representing their school in the right ways off the field.

This team’s identity is built on toughness, resiliency, and perspective. Try to knock them down and they’ll get right back up. That was put to test early on, but the train is rolling now and I certainly wouldn't want to be in its way. To get a new perspective that would really  tie this article together, I sat down with rugby players Sophia Cornacchia and Alissa Zhang. Sophia is a first-year student and new starting flanker from Richmond Hill who played provincial rugby before coming to Mac. Alissa Zhang is a fourth-year student who moved to hooker for this season; she is also going on to medical school after graduating.

If you like your sports with a side of  poetic justice, you’re going to love the upcoming game at Guelph. The team opened its season at home with a match against  the very same Guelph Gryphons (the second ranked team in McMaster’s division), where Guelph stole one 49-12. Now, Mac is rolling  into Guelph on a hot streak ready to take one back. The team certainly has not soon forgotten that early-season loss.

“It’s going to be urgent from the start, it's going to be aggressive, we’re going to want it” says Cornacchia on the upcoming matchup.

For this Mac team, that hasn’t seen the buzz it deserves in a tough division, there’s no backing down now. This is largely due to two tough losses against  Guelph and Queen’s that opened their season. Ever since then, though, they’ve been red hot; outscoring opponents 196 to 5 during a three-game winning streak.

“You can see a lot of improvement game to game, there’s a lot more team cohesion on the field, every game you see something new implemented that was missing the game before,” says Cornacchia.

Point is, this is not the same team that first took to the field against Guelph on August 31st. Take Sophia and Alissa, for instance. Sophia went down with an injury in training camp and Alissa broke her nose in the first Guelph (are you sensing the themes of revenge yet?).

Both returned to the starting line-up September 29th against Western, a 96-0 victory. Zhang gives kudos to the medical and coaching staff for getting them back on the field and preparing them for every  game.

But as some players return to the roster, some players go down; that’s just the nature of a contact and collision sport like rugby.

Some connection  must persist through the constant roster turnover to carry a rugby team through a season; that ‘something’ for this team  is their collective attitude.

It’s something that can be seen in how well they’re  rising to the challenge of the late season mentally. There is a selflessness and reliance on each other that everyone on the team has.

“High school is a lot of putting your weight on one or two  really good players” Cornacchia explains. “When you get to university, you get to see just how much every person on the field matters.”

A  hunger for victory - fuelled by those first two games – is also a big factor in their attitude.

“Going forward, we’re in a strong spot to take on Guelph and Queen’s again,” says Cornacchia simply when I bring up the losses.

It’s not arrogance, it’s confidence. This team knows they’re better than they were a month and a half ago, and their record backs that  up.

Going forward, we're in a strong spot to take on Guelph and Queen's again.

Regardless of what happens between the whistles, this team should be remembered for their work in the community and the lecture hall . This team has made a commitment to being good people as well as good players, and it starts at the top.

“Coach Tim [Doucette] emphasizes the holistic athlete; we’re a person first, then a student, and then an athlete” says Zhang. “We don’t want any passengers”.

Being on the McMaster women’s rugby team isn’t just a 90-minute commitment once a week , it’s a full-time commitment to be a leader and a model student athlete in the truest sense. Alissa Zhang is a great exemplifier of this team-wide attitude. She’s recently won two awards for community service by the university, the Stanley Robertson Scholarship Award and the Alec John Royston MacMillan Memorial Community Contribution Award, for  her  McMaster Rookie Rugby Pilot Project. Zhang created the project for Mac rugby players to streamline the process of becoming certified rugby instructors with Rookie Rugby.  Rookie Rugby is an organization that teaches rugby to children through schools, after-school programs, and summer camps. The idea stemmed from Zhang’s desire to share the  sport that has helped her so much with children across the country.

...We're a person first, then a student, and then an athlete. We don't want any passengers.

“I personally wasn’t introduced to rugby until grade 9 and I would have benefited from getting introduced at an earlier age, so I’m trying to fill that gap,” she says.

Zhang is a team player off the field and on; she worked with the men’s and women’s teams as well as the university, and partnered with Rugby Canada and the Hamilton Hornets rugby club to help promote her project.

Rugby Canada is currently evaluating the sustainability of the program, with the goal of eventually implementing it nationally. The personal benefits of engaging with community work is not lost on Zhang, either.

“Overall, it’s made my time here really meaningful,” she says.

Far from being a false effort to appear nice, community service is a genuine effort by the team to improve their surroundings in a way that goes far beyond the field of play.

...I would have benefited from getting introduced [to rugby] at an earlier age, so I'm trying to fill that gap.

Rugby Canada is currently evaluating the sustainability of the program, with the goal of eventually implementing it nationally. The personal benefits of engaging with community work is not lost on Zhang, either.

“Overall, it’s made my time here really meaningful,” she says.

Far from being a false effort to appear nice, community service is a genuine effort by the team to improve their surroundings in a way that goes far beyond the field of play.

​Duncan Simmons is the CFMU Sports Director and a 3rd year communications studies student from Vancouver, BC. Lover of all sports and all sports fans. Contact him at: cfmusport@msu.mcmaster.ca.