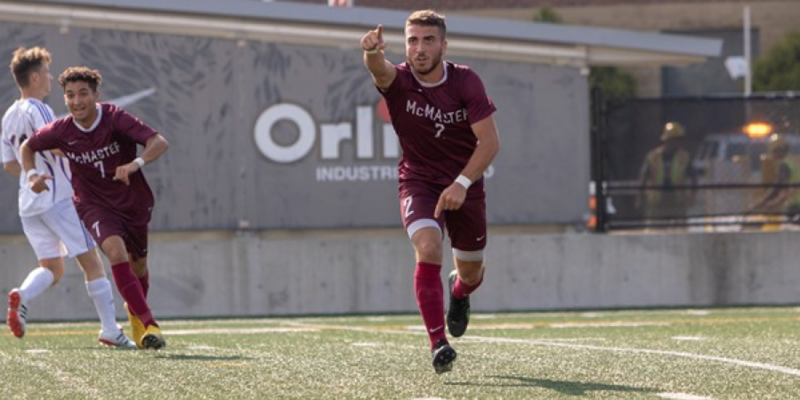 Marauder Sports Roundup is the weekly recap of our Sports Director, Duncan Simmons, focusing on all things McMaster sports.

It’s a brand-spankin’-new year of  Marauder sports, and there’s so much to be excited for. Nothing beats the feeling of a new season. Everyone’s got hopes and dreams up to their eyeballs because they all think they have a shot at a trophy. And that’s the beauty of it - they’re right. You can debate who the better teams are all day long, but everyone’s equal until the whistle blows and it’s time to play. We’re square in the middle of football, rugby, soccer and lacrosse seasons with tons more on the way, so stick around a while because if you love McMaster sports, you’ve found the right blog.

This Week In Marauder Sports

‘Ground-and-pound’ was the theme  for Mac football this past Saturday. On the back of 300+ yards, the Marauders rode a 21-point fourth quarter explosion to take down the York Lions on the road. The win is a nice bounce-back for the squad after a tough  loss against the undefeated Western Mustangs. Any win is a good win, but when you can put together offence and defence late in a game, that’s when magic happens. Mac had two 50 or greater yard drives in the fourth that kept the ball away from York and secured  their win. The key offensive piece was Number 23, 5th year runningback Jordan Lyons. In a breakout game, Lyons took 17 carries for 94 yards and a pair of pivotal 1-yard touchdowns in the fourth quarter. Combine that with a pretty 12-yard passing score to Tommy Nield, and the Mac offense was a relentless  engine in the final period of play. But let’s not let the fantastic offense detract from the great defensive effort  that was a huge part of the win. Leading the way was senior DB  Noah Hallett who grabbed 2 interceptions on the day, which set the tone for zero points allowed by the defence. There’s an old saying in football that you’ve probably heard if you’ve ever watched football with your dad: offence wins you games, defence wins you championships. I say if both are good,  you can be unstoppable.

Mac now sits behind Western in the OUA standings at 3-1, tied for second with Guelph.

Next up, the Marauders welcome the Windsor Lancers at the Ron Joyce Stadium on Saturday the 21st at 1pm ET.

Pure dominance from the Woman’s rugby team as they continued OUA play on Saturday with a win over Brock. Mac set the tone early with two quick scores to start the game. The Marauders then held the momentum to the tune of a 29-0 lead into the final minutes. Centre Britni French lead the way with two tries on the day. Unfortunately for the goose egg lovers out there, Brock managed to punch one in with less than two minutes to go in the game, leaving us with a final score of 29-5. All in all, a spectacular showing for Mac after two straight double-digit losses to open the season.

It was a grinder for the Men’s rugby squad Saturday as they returned home for a showdown with Brock at 10-Acre Field. The teams traded scores into the mid-second half. The  Marauders held a 17-12 advantage, but Brock was able to strike twice quickly and stole the air out of Mac’s  game. By the final whistle the Badgers put up 26 unanswered points and went home with the win. No need to panic over this one, though; the season is young (see paragraph 1) and if Mac can find a way to steal that momentum next time, then they are a competitive team.

The women’s rugby squad have the week off as the men head to Peterborough to take on Trent on Saturday at 4.

Women's Soccer Held Scoreless for Second Game in a Row

Even as we imported the Brock rugby teams for some games, we exported our soccer squads out to Brock for  more games. The women were up first up on the day, but they were unable to come out with a win, falling 1-0 to the Badgers. Whoever first said “quality over quantity” probably wasn’t talking about soccer, but it applies here; Mac was unable to find the back of the net on 28 attempts (15 on goal). Brock took fewer shots, but was more efficient with their takes, putting 11 of 12 on goal. This marks back-to-back scoreless outings for the women, but they’re back on friendly turf next week and looking to bounce back.

The Marauder men’s soccer squad left Brock with a 4-2 loss on Saturday. In a soccer match, two goals can come down to marginal differences between the two teams. In last weekend’s bout with the Brock Badgers, that difference was penalties, with a total of 6 yellow cards and 1 red card handed out. This set Mac back in a game that was otherwise close . The two teams traded goals up to a 2 all tie, but the mistakes caught up to Mac as Brock put 2 behind the keeper with under 11 minutes left, which sealed the game for Brock.

Both teams look to bounce back next week vs Laurier at Home on Sunday.

Duncan Simmons is the 2019-2020 CFMU Sports Director. Contact him through email at: cfmusports@msu.mcmaster.ca