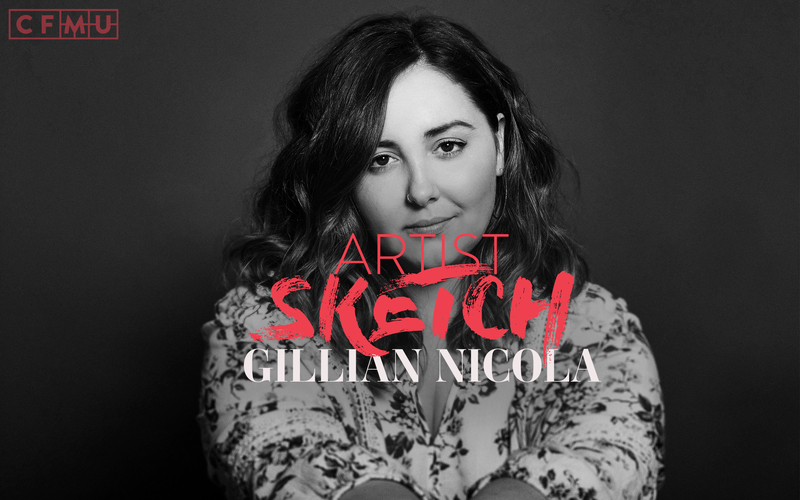 I always try to make a nice space when I’m writing – it happens mostly at nighttime for me...so there’s a lot of twinkle lights involved usually, haha.

I find myself very excited to share this week’s Artist Sketch – not least because it checks so many boxes for a fitting CFMU feature piece.

Local artist? Check. Cool origin story? You bet. Active in the Hamilton/Canadian music scene? No doubt. Great sound? Oh, she’s got it. A whole consecutive month (all of June!) in our Top 30 charts, with one week in our Top 5? Yup, that too - she really has it all. It seems almost too good to be true – but it isn’t! If you don’t believe me, stick around and see (well, read) for yourself!

With that, presenting…Hamilton’s own Gillian Nicola!

You were in a classic rock cover band as a teenager. Do you have any particular fond, funny, or standout memories from that time? Was there something you learned from that time that you still carry with you in your career now?

Do I ever. First of all, it should be said that when I was in this classic rock band, I was in my teens, but it was my uncle’s band, so everyone else was in their 40s/50s. With that, there was a lot of proving myself – not so much to the band, but when I would show up to venues, staff would often be wondering who the hell this 15 year old was! Sadly, this set me up for the regular run of the mill requirement to prove yourself that women seem to face to face in the music industry (and in many other fields of work). It didn’t sour it though, it just taught me a lot. I had a great time singing with them – the whole thing really was a fond/funny/standout memory – it really shaped how I approach performance and working with bandmates now.

When I was a teenager, when most songwriters seem to start writing, I was frustrated. Every time I would try to write, this folk/country thing ended up coming out and I couldn’t understand it. I was one of those “anything but country” teens. Robert Plant’s collaboration record with Alison Krauss, Raising Sand, was the turning point for me. I loved the storytelling in the music, the grit, and specifically, the pedal steel. It was all so haunting and I just became obsessed with anything that had pedal steel on it (I still am). Then I re-found my childhood love for the Dixie Chicks and the rest is history. I finally let myself write what was coming out naturally and everything just became so much easier.

How would you describe your songwriting process? Fun related question: do you have any favourite spots in Hamilton to write lyrics/go to for inspiration?

I am so all over the place on this one – I’m very split. Sometimes I get a melody first and sometimes it’s lyrics. I always try to make a nice space when I’m writing – it happens mostly at nighttime for me (or at least that’s when the initial ideas seem to come) so there’s a lot of twinkle lights involved usually, haha. Often, if I know what I’m trying to say but can’t find the words properly, I’ll do freewriting as a kind of placeholder until I can find something that fits. I seem to have come up with a lot of ideas while walking James North – and Smokey Hollow in Waterdown always helps too!

I seem to have come up with a lot of ideas while walking James North – and Smokey Hollow in Waterdown always helps too!

What is the non-music-related part of your life (could be an event, hobby, friend/family member, etc.) that has most greatly influenced your music career?

I try to be an engaged member of my community and support wherever I’m able to. This has impacted my career entirely – I’ve written political songs and lend my voice where its needed. My politics very much impact who and how I work with people and where I tend to focus my efforts.

I try to be an engaged member of my community and support wherever I’m able to. This has impacted my career entirely – I’ve written political songs and lend my voice where its needed.

You’ve described Dried Flowers as being about you “coming into your own”. How does that compare to the No Place to Call EP? Would you say this record is more introspective or honest than the EP was?

I feel like I was honest on No Place to Call as well, but most of the writing for Dried Flowers occurred during a residency at the Banff Centre where I allowed myself to be very vulnerable. I think I found space to say things I was nervous to say before. A lot of that came from working with other artists at the Banff Centre – I had never really shared lyrics while they were a work in progress before or told other artists exactly what I was trying to say, so opening myself up that way definitely re-wired my brain. It was scary at first, but now it’s liberating.

Do you have a favourite memory from the residency you did at the Banff Centre or from being on tour, particularly related to your collaborations with other artists?

I recorded the song “She Stays Silent” there. It’s a song about sexual assault and I wrote it very quickly during the residency. I knew I wanted to record it with an all female band, so I recruited other songwriters there to put together a full band. Building the song from the ground up with a band of all songwriters and specifically all women was a really unique experience. That song is raw both lyrically and musically, and it’s a direct result of how it came together over about 24 hours.

[About "She Stays Silent"]: Building the song from the ground up with a band of all songwriters and specifically all women was a really unique experience.

Your style as a guitarist focuses on open tunings. How has your style evolved from the beginning of your career? What do you think are the advantages and possible challenges of “throwing music theory out the window” and adopting a freer style?

I’ve written in open tunings basically since I started writing. I find it super fun – sometimes it becomes frustrating because I basically just turn off my brain and play around with shapes until I find the colours that I want, but it’s that exact process that makes it totally liberating at the same time. It’s a challenge live to switch between tunings because of the risk of breaking strings, but I love how it sounds so much, that I don’t really care! In terms of evolution, I was a self-taught guitarist for quite awhile, but a couple of years ago I started taking lessons with Jessica Stuart in Toronto – she kicks my butt every now and again and it’s very helpful.

Let’s talk about “Songwriters in the Round” a little bit, as it’s a fascinating project! What made you want to host the circle and where did the idea come from – was it something you would have wanted early on in your career? What is the most rewarding part of hosting it?

It kind of just happened, but I’m glad it happened when it did because I don’t know if I could have handled the work when I was first starting out. I had been a part of a couple of shows in this format and I decided to host one myself – but the plan was only to do one show. A lot of the staff of The Painted Lady (the bar I host it at) were there that night and they loved it – they asked if I would do it on a monthly basis. That was three years ago now! If you’re not familiar with the format, it’s basically no strict sets, with all performers on stage the whole time, swapping songs in a stripped back setting where we tell the stories behind the songs. It’s very common at folk festivals and in Nashville. Really, the whole show is rewarding, but I think my favourite part is being able to listen to songs so carefully – it’s hard not to when they’re happening a few feet away from you. We all usually get to hang out before the show a bit too – it’s always just a blast. I really don’t think we’ve ever had a bad show.

[About "Songwriters in the Round"]: We all usually get to hang out before the show a bit too – it’s always just a blast. I really don’t think we’ve ever had a bad show.

A NEW FOLK EXPERIENCE: Posters from "Songwriters in the Round", a stripped-back, collaborative performance by multiple songwriters, hosted monthly by Gillian Nicola

What are your aspirations as a musician (including dream collaborations)?

I want to keep creating and keep playing. Ideally, the stages will get a bit bigger, but it’s the art that matters to me. I’d really like to eventually go do a serious stint in Nashville to do writing but without a firm time limit – after doing one songwriting residency where I had nothing to do but write, it’s all I want! Right now, my dream collaboration would be to write with Caroline Spence – she’s my favourite songwriter coming out of Nashville these days.

As a music teacher and volunteer for Girls Rock Camp Toronto, do you have any advice to aspiring young musicians, especially singer/songwriters and guitarists?

Be yourself. It won’t be worth it unless you are. And just keep going! 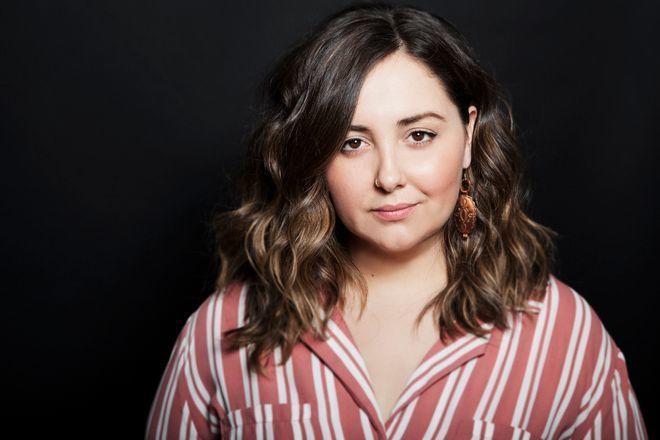 "Just keep going" is fine advice - and it seems to be working awfully well for the artist herself! From Banff to Toronto, Gillian Nicola is representing Hamilton’s music scene across all of Canada, and that is, in my humble opinion, something to celebrate. If you think so too (and why wouldn’t you?!), be sure to take a gander at her website, Facebook, Twitter, Instagram, Youtube, SoundCloud, CBC Music, and Bandcamp. Whew! This Steel Town girl is not messing around!

Speaking of Steel Town, Gillian Nicola will be performing at the next show in the "Raise The Roof" live concert series, hosted at well-loved Hamilton record store Dr. Disc! Check out the event page for more information - she'll be starting at 9:00 PM!

That's all for this week's Artist Sketch. Olivia out!

Olivia Fava is the Community Outreach Coordinator at 93.3 CFMU. She is the host of Morningfile as well as Rainbow Radio, a celebration of LGBTQ+ music airing Monday nights. She is also a musician and guitarist who particularly enjoys jazz and bossa nova. 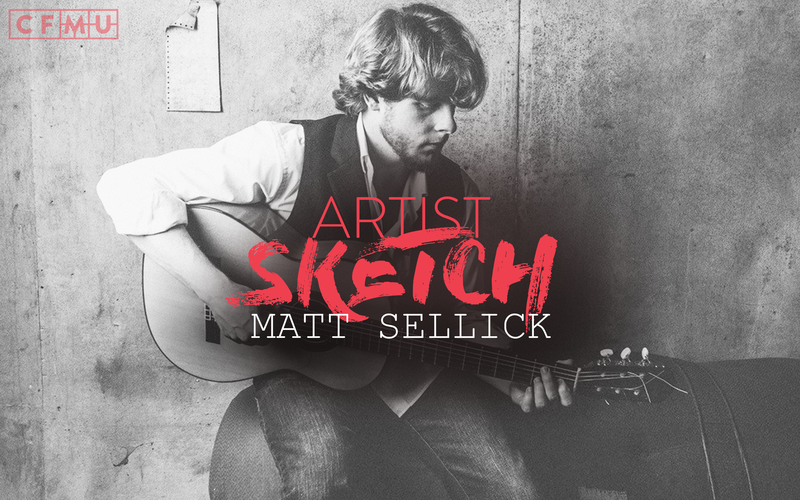