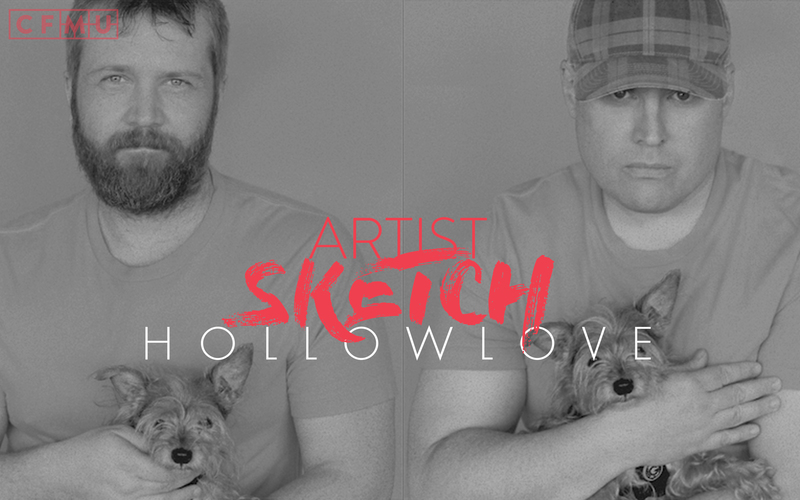 HOLLOWLOVE is a Vancouver-based duo. You might recognize the title of their distinctive single, "I Love My Computer", from the CFMU charts, where it peaked at #13. The track piqued my interest as well (wordplay!), reason being that I had never heard anything like it before.

The duo themselves describe their project as "moody electropop", but it's more than that, too - it's years of teamwork, hand-painted album covers, and all-original sound production (with a healthy side of political activism and RPGs). I reached out all the way from across the country to members Keith (production and arrangement) and Ryan (vocals, lyrics, and artwork) to ask about their debut album and some of their visual and musical inspirations (featuring some discussion of video games - read on to the end for that!).

Without further ado, this is HOLLOWLOVE!

How did the collaboration between the two of you start? I know it’s been somewhat long-standing.

Ryan: I knew Keith’s music and he was roommates with a guy I worked with. So we met and liked each other, and my band Front & Centre hired him to do some pre-production on our songs.

Keith: Ryan and I just kind of clicked creatively, and continued working together after Front & Centre dissolved, taking on the name Fidgital for the music we made together.

Hollowlove is a new project within this longer collaboration. What did the two of you want to change from your time as Fidgital – what did taking this new direction mean to you?

Keith: It had been a while since the final Fidgital record, Departure, which I’m still really really proud of, and I had been living in California for a few years with only remixes or occasional soundtrack work in between. On moving back to Canada, I really wanted a break, to make something in a different way. I rejected the sample-based aesthetic that was the technical core of Fidgital, and vowed to use no unoriginal samples, to make everything from scratch.

Ryan, you’re the vocalist of the group and also the artist of all the album covers, all of which are so incredibly expressive and unforgettable. What influences do you draw on in your visual style, and how do you envision your visuals and music working together to create a mood? Are your creative processes for art and music different, or similar?

R: Gosh thanks! For the purposes of Hollowlove, I wanted a consistent, attractive style that I could produce reasonably quickly. I’ve always been a huge fan of the 1970s and 80s European Heavy Metal comic style- the artist Moebius and such. A more modern influence would be Tomer Hanuka (if you haven’t seen his work, it’s mind-blowing.) I almost always have those in the back of my mind as I draw, and I always aim to reinforce the theme or feeling of the song. If I have an idea, as long as it aligns with the Hollowlove vibe, I just kind of go for it. I try not to over-think it.

K: Thanks! The big evolution was more of a revolution, a complete rejection of my old sample-based aesthetic. It got to the point where I felt profoundly embarrassed when I heard my samples, either in my music or in somebody else’s, and got a feeling like I had cheated and was going to be found out. But you know what’s funny? I love other people’s sample-based music! Double standard against myself. The signature elements of Hollowlove’s production are analog synths with acoustic elements, like live percussion, strings, flugelhorn, etc., and of course Ryan’s amazing voice. Some of the producers who inspire me the most are Ryuichi Sakamoto, Eddie Stevens for his incredible work with Roisin Murphy, and Thomas Fehlmann for both his solo work (especially on Kompakt) and with The Orb.

[On the album cover influences]: I've always been a huge fan of the 1970's and 80's European Heavy Metal comic style - the artist Moebius and such.

How do the two of you put together a song? Between the visuals, the production, and the vocals, is there something that usually comes first?

R: Usually Keith comes up with a basic idea – a groove, a chord progression. Although sometimes we jam them out together. Usually I’ll write some melody and lyrics. Usually some kind of cool lyric presents itself from out of nowhere, and the rest of the lyrics just sort of boil out of that to fill the Hollowlove mould.  We try to get to a demo as quickly as we can.

R: When the production is nearly final, we record my final vocal tracks. By that point, I might have developed an idea for the visuals. I make time-lapse videos of how I paint each image, so you can actually see that process unfold on our Youtube channel.

Usually we have so many ideas that it would be easy to get cluttered with elements that we fall in love with...production is usually a subtractive process, removing elements...until the balance is right.

WATCH: Song Art Timelapse for "I Love My Computer" from the Debut Album

How do your personalities mesh together as Hollowlove – what is your dynamic like? Would you say you are similar people, or that you balance each other out?

K: Kind of both I guess! We have a dynamic of absolute trust. We’ve been working together for a long time so we never have to worry if we have to tell the other that we don’t like something they’ve come up with.

R: Usually we like what we do though, even the rough ideas. We’re both quite picky people, so if something works for both of us, we’re confident the listeners will like it.

K: What are some differences? I’m more comfortable in front of an audience, public speaking, giving interviews, whatever. Ryan’s a bit more introverted in that department.

We're both quite picky people, so if something works for both of us, we're confident the listeners will like it.

Why electropop? What draws each of you to the genre, over other styles of music?

R: We both have very broad musical tastes that— mostly overlap? Keith’s got a jazz background. I’ve been experimenting with live vocal improvisation. Electropop is something we both grew up with and love. It’s defined without being overly restrictive. It’s also something we can make with only two people.  Working with more people is great fun, but it’s slower, and practically speaking, neither of us has time to spare.

K: I think that’s a key part of it. We love the genre and we’re good at it. We have limited time with which to make music, so it’s a big advantage to not have to negotiate with a full band on what the arrangement will be, or have to rehearse it for weeks before it’s ready to record.

Electropop is something we both grew up with and love. It's defined without being overly restrictive.

What was the inspiration for “I Love My Computer”? I felt an almost dystopian chill of foreboding while listening to it, thinking of the dangers of an over-dependence on technology. Was this kind of feeling you were going for?

R: The lyrical inspiration comes from me having invested too much time working on developing a social app that ended up going nowhere. It’s all about that feeling when you look outside and realize that it’s already autumn again and you barely remember the summer. Or the past three years.

K: Musically, I wanted to reflect the darkness of Ryan’s lyrics, almost celebrate them. The synth solo toward the end is part Blade Runner, part Chariots Of Fire. It sounds victorious, anthemic, but what is it celebrating? In the end, we’re still left dark inside.

How did “Serpentine” come to be – was there a moment when the two of you realized that it was something you needed to make? Or did the idea come on gradually?

K: The music started off totally differently, as an ambient piece. You can still hear a bit of that in its intro.

R: For a long time I’ve been lamenting the sparseness of political activism in more recent pop-music. When some initial lyrical improv led me down that path, I knew I had to go there. I’ll be the first to admit, it’s not anything like a mature critique of Conservatism™, but it sure felt good to go on a rant, and we got a great response from it.

[On "Serpentine"]: For a long time I've been lamenting the sparseness of political activism in more recent pop-music. When some initial lyrical improv led me down that path, I knew I had to go there.

“Everything Falls In Line” has a standout RPG-esque visual and fantasy-inspired lyrics to match. Is there a particular RPG, video game, or story that you two are fans of or were inspired by?

K: We used to play Dungeons & Dragons together!

R: I wish we still did. I listen to the Critical Role podcast now. It helps take the pain away.

K: He keeps trying to get me to listen to it but I haven’t had time.

R: I work in the video-game industry. I have for decades. Anyway, I’m working on an Ultima-inspired old-school pixel-pushed RPG game right now. It probably had a little something to do with us going in that direction!

[On playing Dungeons & Dragons together]: I wish we still did. I listen to the Critical Role podcast now. It helps take the pain away.

The RPG-inspired visuals for the single "Everything Falls in Line"

Finally, where does the name Hollowlove come from?

R: That was me. The URL was available. LOL. No, of course there’s a lot more to it. We’d been playing with new names for quite a while. I really liked The Hollow Scene but unfortunately somebody was using it. Hollow is appropriate to the music we’re making because there is that emptiness, that hunger, that longing to be filled.

K: Surface beauty that surrounds an inner void. That’s kind of an invitation to the listener – that they could fill this void. Or we could fill it for them.

[On the name Hollowlove]: That's kind of an invitation to the listener - that they could fill this void. Or we could fill it for them.

I don't know about you, reader, but "surface beauty that surrounds an inner void" is one of the most poetic explanations for a band name I've ever heard. To be swept away in a rush of beautiful emptiness (or if YOU love your computer just a little too much), check out the dynamic duo HOLLOWLOVE on their website, YouTube, Facebook, Twitter, and Instagram. Music-wise, they can be found on SoundCloud, Spotify, and Bandcamp!

That's this week's Artist Sketch! I'm out (to go jam to "I Love My Computer").

Olivia Fava is the Community Outreach Coordinator at 93.3 CFMU. She is the host of Morningfile as well as Rainbow Radio, a celebration of LGBTQ+ music airing Monday nights. She is also a musician who particularly enjoys grabbing the guitar and playing by a river or rainy window. 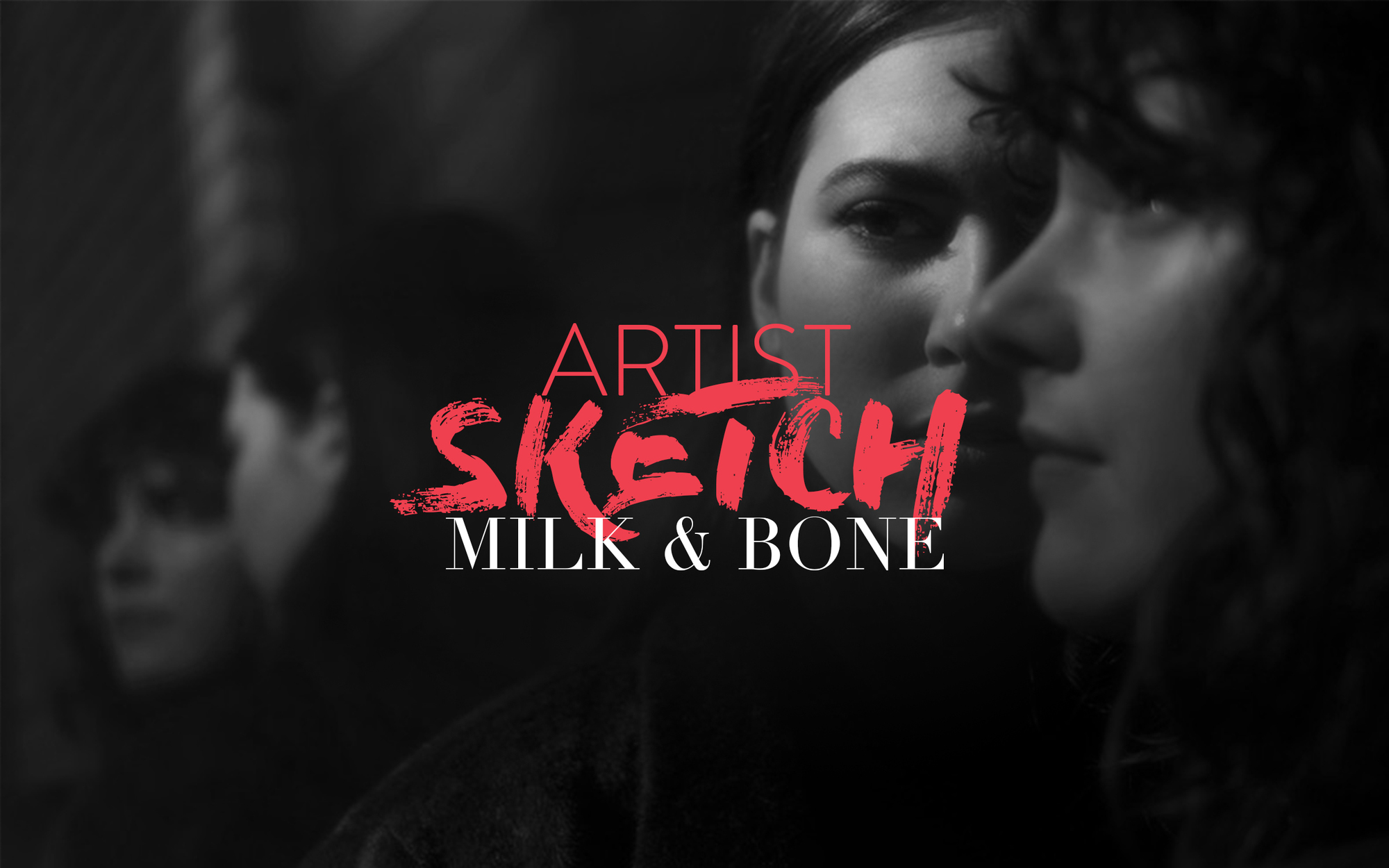