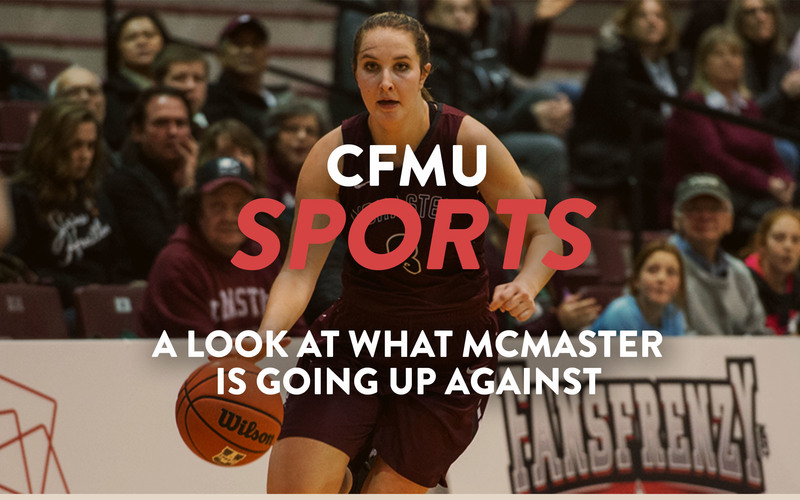 This past weekend, McMaster’s women’s Basketball program clinched themselves a spot in the 2019 U-Sports National Championship, taking place at the Mattamy Athletic Centre in Toronto, this upcoming weekend, March 7th-10th.  McMaster is the tournaments #2 seed after winning the OUA’s Critelli Cup, beating the Ottawa Gee-Gees 79-75 in Ottawa last Saturday. It was the program’s first OUA Championship since 2008. This weekend’s tournament will be the Mac ladies’ second straight appearance in the tournament, after entering as the #5 seed in last year’s Championship in Regina.

The rest of this will outline the rest of the field, and their respective journeys to this year’s tournament.

The numbers inside the bracket before the team name is their ranking in the most recent U-Sports Top Ten, and the records given are their regular season records, and the conference they reside in.

The Laval Rouge-et-Or enter this weekend’s tournament as the second ranked team in the U-Sports Top Ten.  Laval were crowned the RSEQ Champion this past weekend, after defeating Concordia, 75-55. If the Top Ten were updated in the week leading up to the tournament, Laval would likely find themselves in the top spot after Ottawa’s Critelli Cup loss.

Laval is led by Jane Gagne, the fourth-year guard, who averaged 13.6 points per game (PPG) and 5.2 rebounds per game (RPG) in the RSEQ regular season, good for sixth and tenth in the conference respectively. While her point total may not be as high as some would expect, she had a conference best field goal percentage (FG%) of 50% in the regular season, averaging a tad bit under 10 shots per game, not to mention, a whopping 92% from the free throw line.

Laval also boasts an impressive defensive lineup, with the likes of Khaleann Caron-Goudreau, who led the RSEQ with 1.7 blocks per game (BPG), who doubles as a very good rebounder, averaging 9.4 RPG. Sarah-Jane Marois enters the tournament after averaging 17 PPG in the RSEQ playoffs, and is solid defensively as well, as the fifth-year guard averaged 1.1 steals per game (SPG) as well as 0.5 BPG.

Laval opens night cap of the schedule on Thursday at 6:00, as they take on the host, Ryerson. 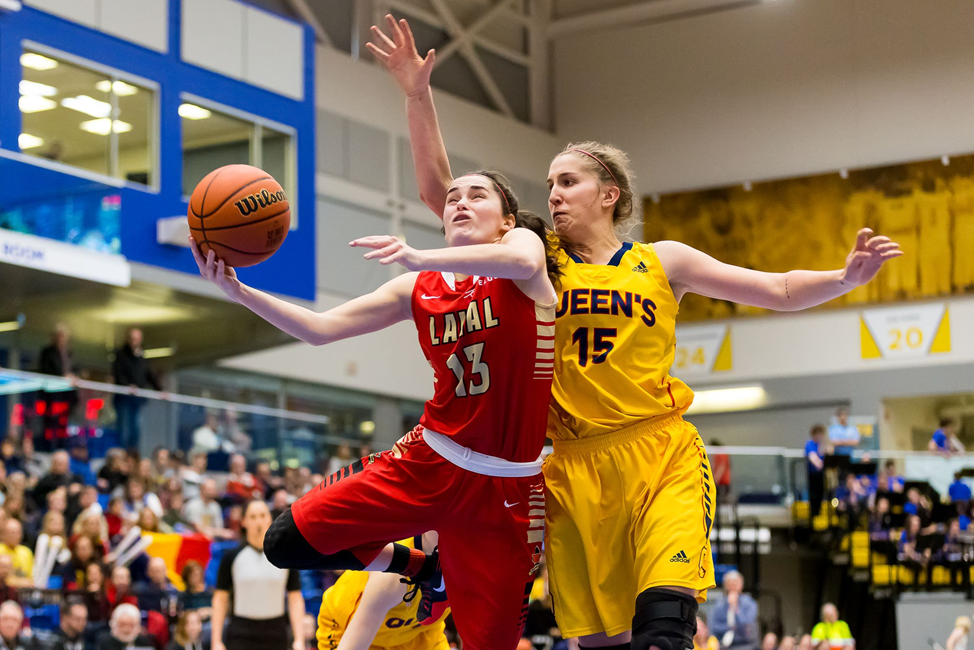 As mentioned above, McMaster enters the tournament coming off a Critelli Cup Championship win over the National top ranked team, Ottawa.

Sarah Gates will be the driving force offensively for this McMaster team, as she was the second leading scorer in the OUA, with 17.1 PPG in the regular season. The second year forward/guard mix also shot 44.5% from the field, and managed 4.8 RPG, and 1.5 SPG.

The dynamic fifth year combination of guard Hilary Hanaka and forward Linnaea Harper are also a threat on both ends of the floor, as both were top ten in the OUA scoring with 14.6 and 14 PPG respectively, while also averaging 1.8 and 1.9 SPG respectively. The addition of Christina Buttenham,  the transfer from Iowa, has been huge defensively, as she was fourth in the OUA with 2.7 SPG, and fifth with 1.3 BPG.

McMaster opens the tournament at noon on Thursday, against Concordia.

The Huskies come into the tournament after capturing the Canada West title with a 53-49 win over the Regina Cougars.

The Huskies will need both these players to contribute on Thursday, as they take on the AUS Champion, Acadia to open their tournament.

The Ottawa Gee-Gees, led by OUA Coach of the Year, Andy Sparks and, a top three team nationally throughout most of the season, enter the tournament after a tight 79-75 loss to McMaster in the OUA Final.

McAlear-Fanus, the fourth-year guard, averaged 10.3 PPG, 5.0 RPG, and 4.9 assists per game (APG), and had an assist to turnover ratio (A/TO) of 1.8. On the defensive end, she averaged 1.7 SPG. Besselink, a fifth-year guard, averaged 11.2 PPG this season, while shooting 45% from the field, and 38.8% from three. Brigitte Lefebrve-Okankwu, the second year forward, led the Gee-Gees in scoring this season, averaging 14.0 PPG. She also made her self a threat down low, averaging 6.1 RPG, while shooting 50.3% on non-three-point shots, contributing to an overall FG% of 51.9%

Even if one or two of these players have an off night, Ottawa is still a very deep team, with some other very good scorers such as Amelie Hachey and Angela Ribarich, who can be a big factor against Regina in their opening game. 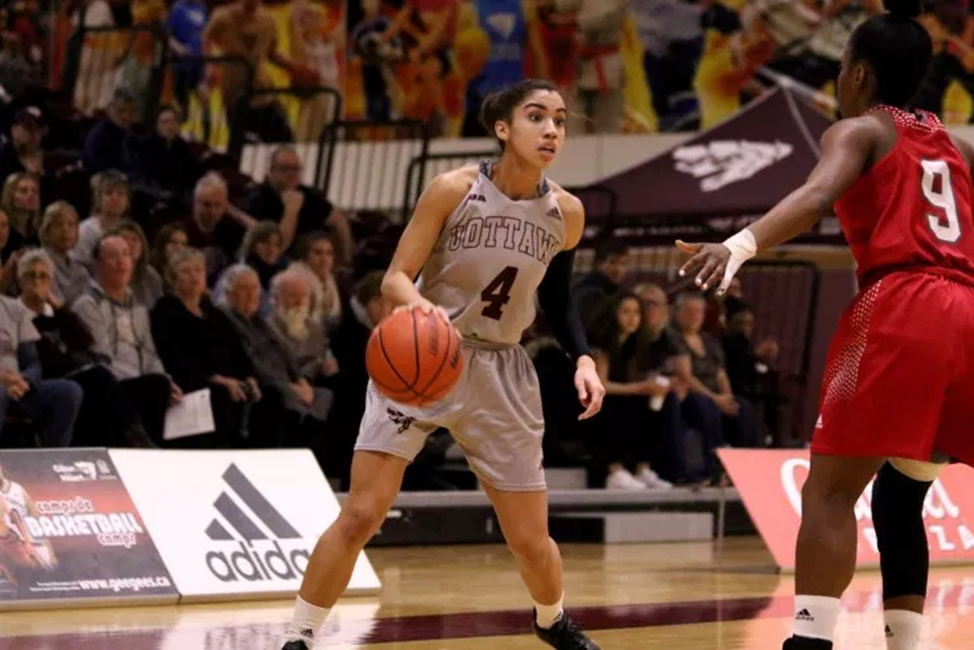 The Regina Cougars enter the tournament as the fifth ranked team in the country, coming off a Canada West finals loss to the Saskatchewan Huskies. Despite being the lower of the two Canada West teams in this tournament, the argument could be made that they are the better of the two, holding the better record compared to their provincial rival.

The Cougars will rely on Kyanna Giles, the third-year guard from Winnipeg, who led the Cougars with 18.8 PPG, as well as 8.8 RPG, good for ninth in the CW Conference. Giles also solidified herself as one of the best defensive players in the Conference, averaging 2.6 SPG, good for second in the CW.

Outside of Giles, the Cougars will need scoring from their second year tandem, Carolina Goncalves and Macaela Crone, who averaged 10.4 and 10.3 PPG respectively.

The Cougars are in tough in the national quarterfinal, as they take on Ottawa on Thursday. 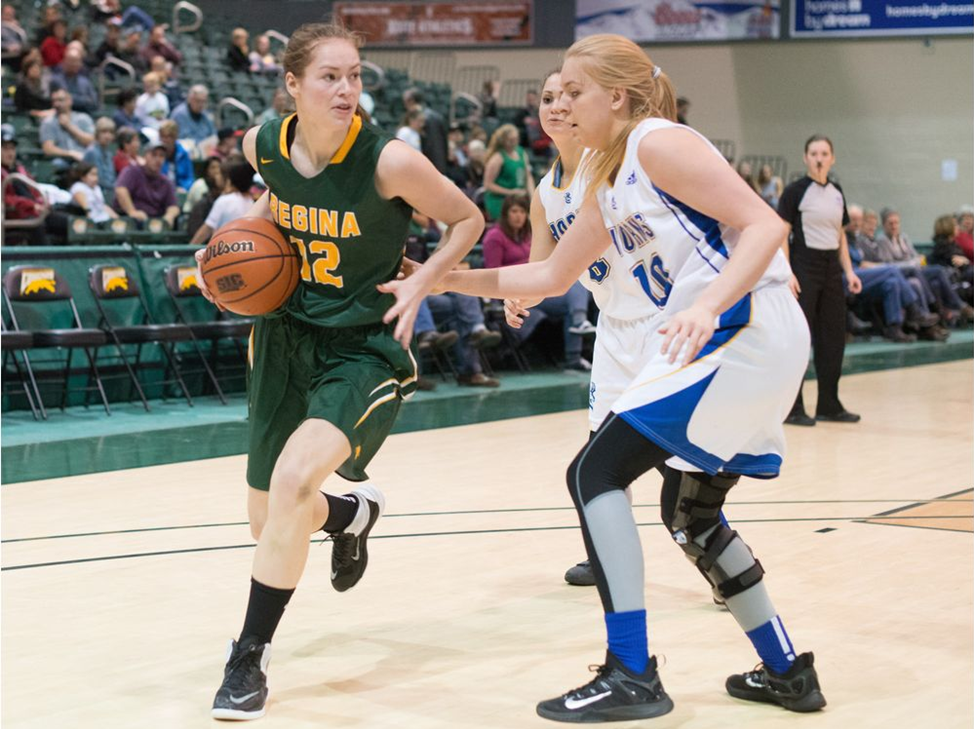 Acadia enters the National Championship tournament as the lone representative from the Atlantic Conference, as they knocked off Memorial in the AUS Final, 84-74.

The Axewomen will need Haley McDonald to perform in order to beat Saskatchewan in the first round. McDonald, the third-year guard, was second in the AUS in scoring, averaging 23.3 PPG, while being third in the conference with 3.7 APG.

The Axewomen have a good secondary cast of rebounders, scorers, and defenders which includes Jayda Veinot, Sarsha Cadle and Lanae Adams, who will also need to step up with a tough first round matchup against the Saskatchewan Huskies.

Concordia is one of two teams in the national tournament that are unranked in the U-Sports Top Ten, after they fell in the RSEQ Final to Laval, 75-55, but secured the at-large bid. Of the Stingers six losses in the regular season, only two were against teams that were not Laval.

The Stingers possess the RSEQ’s top scorer from the regular season, in the form of Myriam Leclerc, who averaged 18.8 PPG. Concordia’s LaDonna LaMonth was the four best rebounder in RSEQ with 9.2 RPG, while the second year centre from Jamaica also had the second highest FG% in the conference, at 48.1%

Outside of these two, the Stingers have two other top ten scorers from RSEQ, as Caroline Task was third with 15.6 PPG, and Coralie Dumont who averaged 13.0 PPG, good for ninth in the conference.

Concordia will need contributions from as many pieces as possible, as they take on McMaster on Thursday.

Ryerson grabs the eight seed, as they were guaranteed a spot in this tournament as hosts and are the third representative of the OUA. Ryerson was ousted in the OUA Quarterfinal, after Despite being the #8 seed, they are a very good team who can give Laval some trouble in their quarter-final match up. 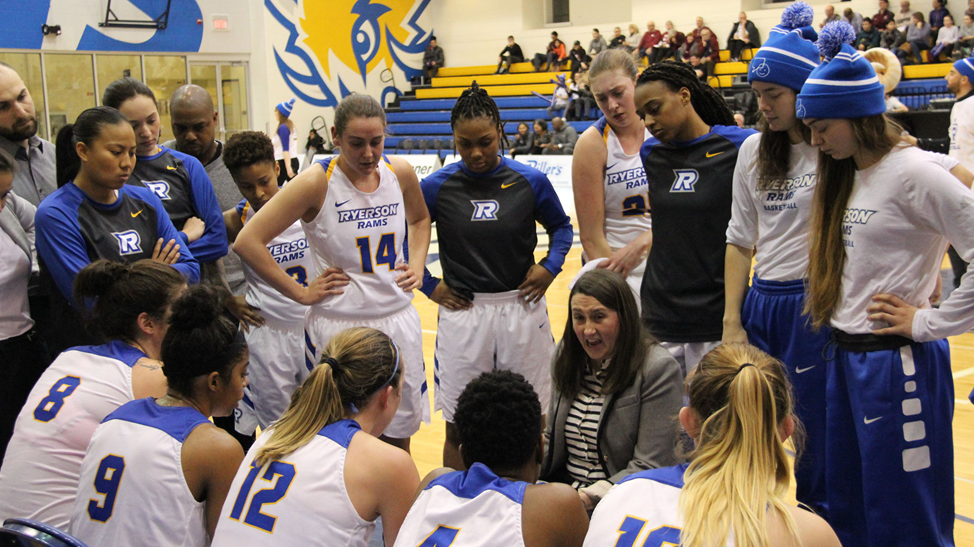 Bin-Edward averaged 10.1 PPG on the season, while doing a large part of her work on the defensive end, where she was top ten in blocks with 0.9 BPG and contributed 1.5 SPG as well.

Ryerson takes on the top seed Laval to open the evening half on Thursday.

For more information regarding the Championship tournament and tickets, visit usports.ca.