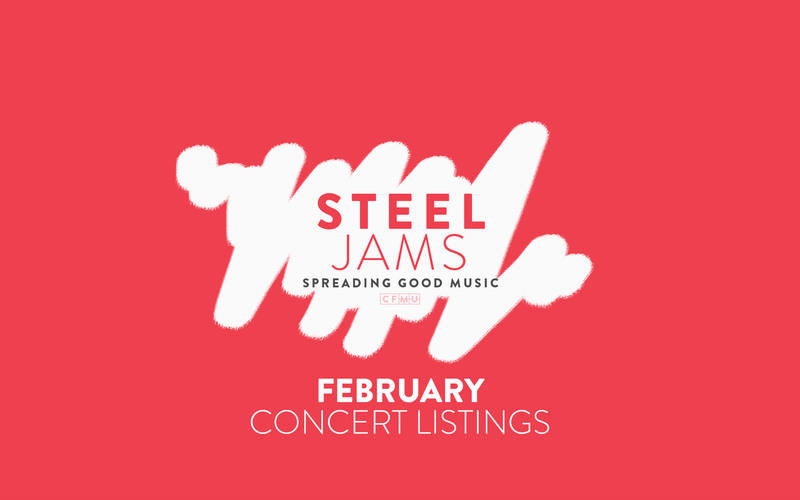 Are you an avid show goer? Are you constantly looking for concerts in the Hamilton area? Do you like supporting local artists and venues? Do you find yourself too lazy to do all of the research? We’ve been there. That’s why we’ve started ‘Steel Jams’. Stay up to date by keeping your eyes peeled for our monthly concert listing posts.

You can also tune in to The Throwdown on Thursday’s from 2:00pm - 3:00pm where we feature concert listings every second Thursday of the month! Are you as excited as we are? Here are your hand-picked listings for the month of February:

McMaster alumna Terra Lightfoot is a Canadian musician and singer-songwriter from Hamilton, Ontario. After two albums released with Sonic Unyon Records, she has become known for her rock inspired vocals paired with a folky feel.

Personal Fav: You Get High - This track particularly stands out in comparison to the rest of the album. While most tracks carry a powerful, bluesy-rock feel, this track takes her mezzo-soprano voice and accompanies it with a soft guitar, showing a much gentler side to this rather roots rock inspired album.

Formed in 2010 Yamantaka // Sonic Titan describes themselves as a “Noh-Wave prog collective,” a pun on Noh theatre and the No Wave style of experimental underground music.

Think that’s cool? They’re also a performance collective and rock band. Straight out of Montreal, Quebec, this band pushes the arts scene by integrating themes into their work to resemble faults in humanity: hubris, greed, and madness. You can now find them entirely based out of Toronto, Ontario.

Personal Fav: Someplace - Someplace gives off an atmospheric feel, lay down and close your eyes - this track will make you feel like you’re floating. The songs intro carries an ambient ballad which progresses into a thunderous array of sound and suddenly you realize that they’re here to rock.

Ultraviolet Catastrophe @ The Casbah, Hamilton, ON

Ultraviolet Catastrophe (UVC), is a Hamilton based band straight out of McMaster University. Comprised of three engineering students, their indie rock sound has topped the CFMU and this will be their first ever live show. Check out their interview on our website!

Personal Fav: Coffee Shop - This track immediately makes you want to sway back and forth. Picture it, you’re sitting in a small coffee shop, the tones are warm, the sunlight illuminates the entire atmosphere and the most amazing human being you’ve ever seen walks through the door - cue track.

Born in Hamilton, Ontario and raised in Nova Scotia, Canadian indie rocker Matt Mays started out in rock group ‘Matt Mays & El Torpedo’ based in Dartmouth Nova Scotia. Since then, Mays has moved on to become a solo singer-songwriter, with five Juno Award nominations, winning rock album of the year for his album ‘Coyote’ in 2014.

Newest Album: Twice Upon a Hell of a Time

Personal Fav: NYC Girls - Because this album is an acoustic remake of  “Once Upon a Hell of a Time,” the track emanates an entirely new feel! Altering the tone and character, Mays takes elements from the previously pop approach and adds a folk type feel accompanied by a cheerful choir.

Reuben and the Dark @ Mills Hardware, Hamilton, ON

Led by singer/songwriter Reuben Bullock, Reuben and the Dark are a Canadian indie folk band from Calgary, Alberta. The ethereal sounds of this indie alternative band exemplify the raw emotion that carries throughout the length of every track.

Newest Album: Arms of a Dream

Album Hits: All or Nothing

Personal Favs: Arms of a Dream - This self titled track offers something a little bit different than the rest on this record. You can hear the moments of self reflection in his lyrics, and the light he shines on hardship and intense emotional struggle in personal relationships. His hidden darkness creeps through with the use of both lyrical and percussive elements.

Wild Rivers is an Indie-folk band based in Toronto, Ontario. Formerly known as Devan & Khalid, the band combines folk roots, pop elements and indie staples to present a vibe that warms your entire body.

Album Hit(s): Call it a Night

Personal Fav: Howling - This track makes you want to sing. With harmonies from both Devan Glover and Khalid Yassein (founding members) paired with the tracks steady percussion and  classic folk feel, you can really hear the bands Fleetwood Mac inspirited sound!

Got a gig that’s not on the list? Email us here.