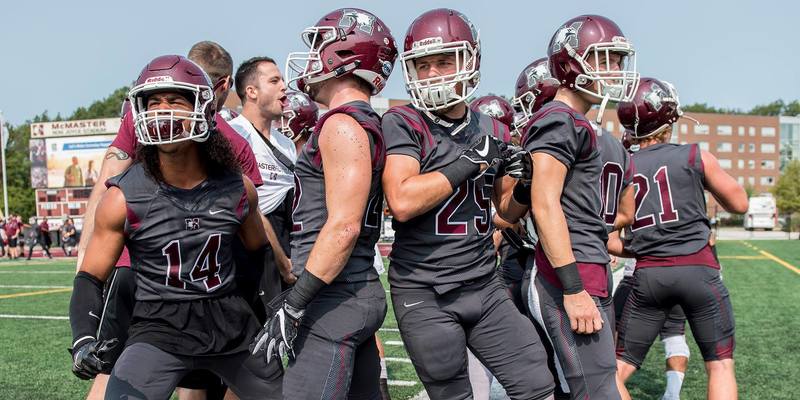 The Marauders have taken on Guelph, Ottawa, Western and Toronto up to this point in the season. At the time of their win against Guelph, the Gryphons sat #8 in the U-Sports polls. McMaster was lucky to come away from this one with a win, considering they were only able to put up 16 points. The Gryphons held the #10 spot in the rankings, despite having the same record as McMaster entering this past weekend.

At the time of the defeat to Ottawa, the Gee-Gees were ranked at #9 in the U-Sports polls, however, they are not ranked in the latest rankings. The Gee-Gees are now 2-1 through four weeks, and it took them a late fourth quarter touchdown to knock off the Marauders, 18-11. 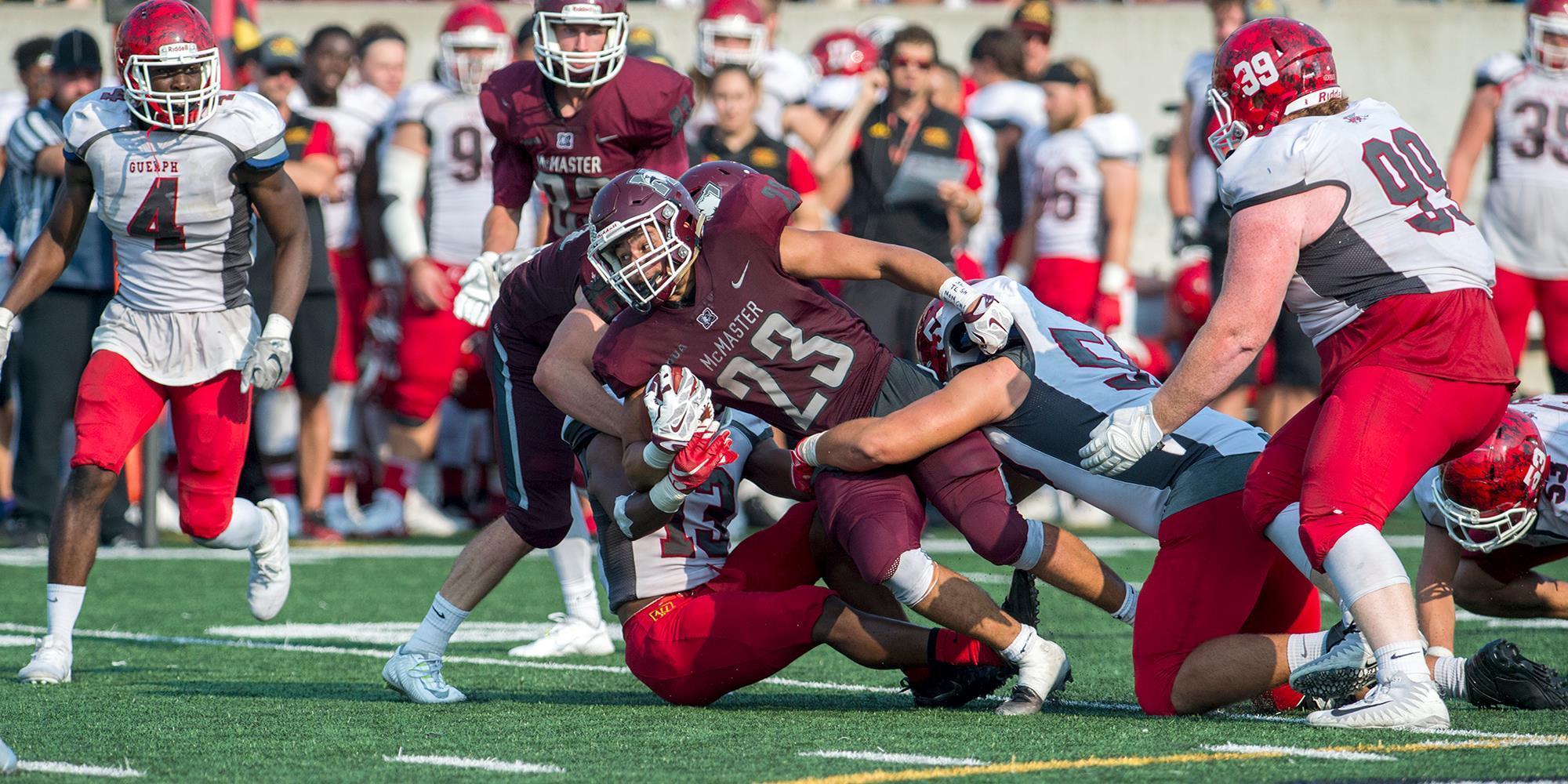 The Western Mustangs were, and still are the #1 ranked team in the country, and showed it in their home opener against Mac, with a dominating 44-6 win over the Marauders in week three.

Week four brought about the Homecoming tilt against the Toronto Varsity Blues, where McMaster cruised in the second half, to a 37-3 win, bringing their season record to 2-2.

It can be argued that all but one of McMaster’s games were against ranked opponents, whether you want to look at it from the time of the game, to the most recent polls. For that reason, McMaster’s schedule thus far has been quite difficult, and doesn’t get much easier with a week five matchup with the Wilfrid Laurier Golden Hawks, however, the combined record of their opponents thus far is 7-6. 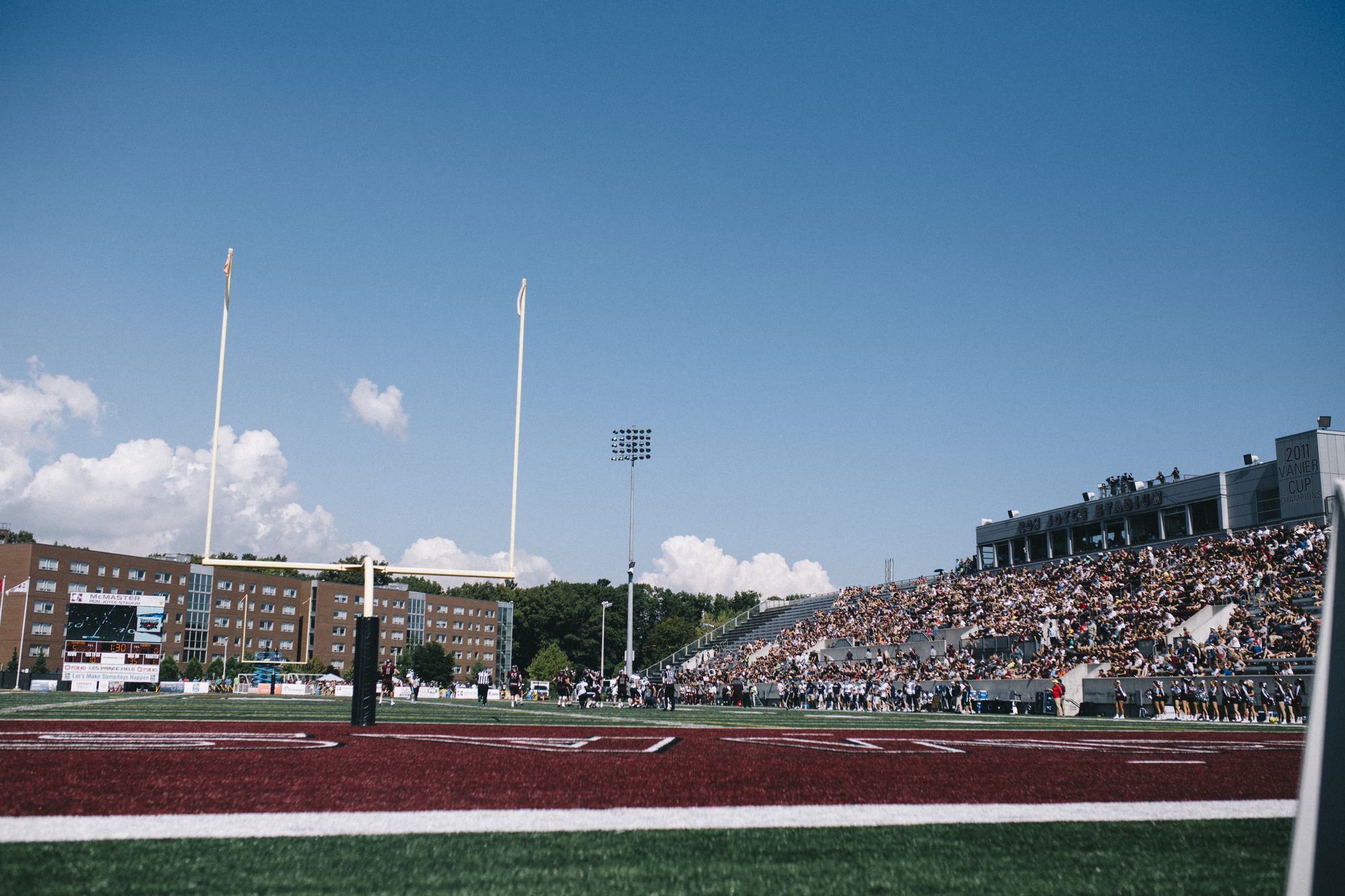 The offense has been the part of this team left in the shadows, as they averaged only 11 points per game, and 330 yards per game, heading into the contest against Toronto, where they were able to put up 37 points, 33 of which came from offense or special teams, and mustered up 499 yards of offense.

The quarterback position has been the biggest area of concern, as second year Jackson White, who was a member of the 2017 OUA All-Rookie team, couldn’t show any experience through his first three starts of the season, as he was pulled at halftime of both week two and three losses, giving way for Andreas Dueck. In those first three games, the Marauders passing game was only able to put up 627 yards of offense, while having 315 yards of passing offense against U of T alone. With the career high performance against Toronto, look for Dueck to be the McMaster starter here on out, and build upon the partnership with second year receiver Tommy Nield, who had the second highest amount of receiving yards in a single game in McMaster history, with 233 yards, on 10 catches against Toronto. 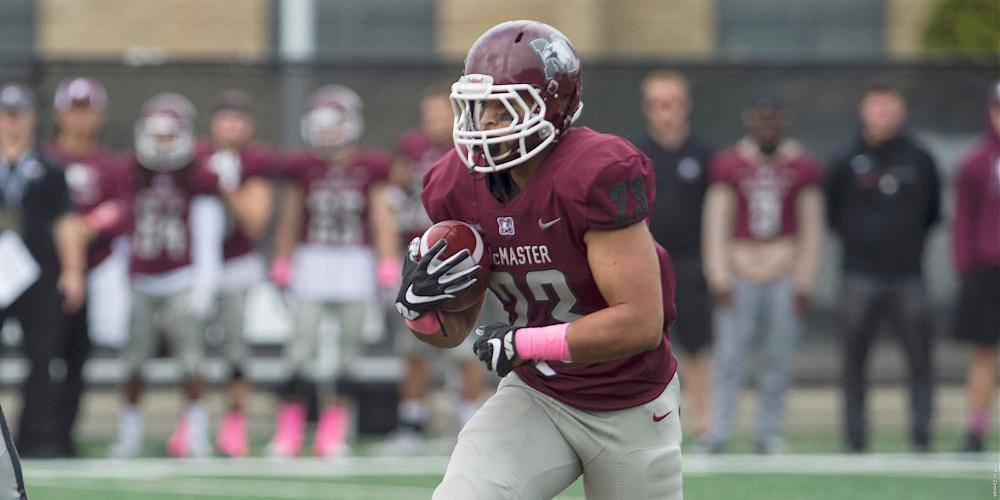 Rushing wise, McMaster has been middle of the pack, averaging 120.3 rushing yards per game, but Jordan Lyons will continue to be a huge piece of the Marauder offense as the passing game develops, and until playmakers such as Justice Allin return from injury. Lyons averages 86.5 rushing yards per game, fourth best in the OUA, which is impressive considering how difficult it has been for a young McMaster offensive line to create holes for him.

The performance on Saturday will hope to boost the confidence of the Marauder offense, because heading into the second half of that game, the Marauders hadn’t scored a touchdown since the fourth quarter of the season opener against Guelph, snapping a 168-minute touchdown drought. The offense will have to turn halves such as that one, into full games for the Marauders to have their eyes set on a Yates Cup run. 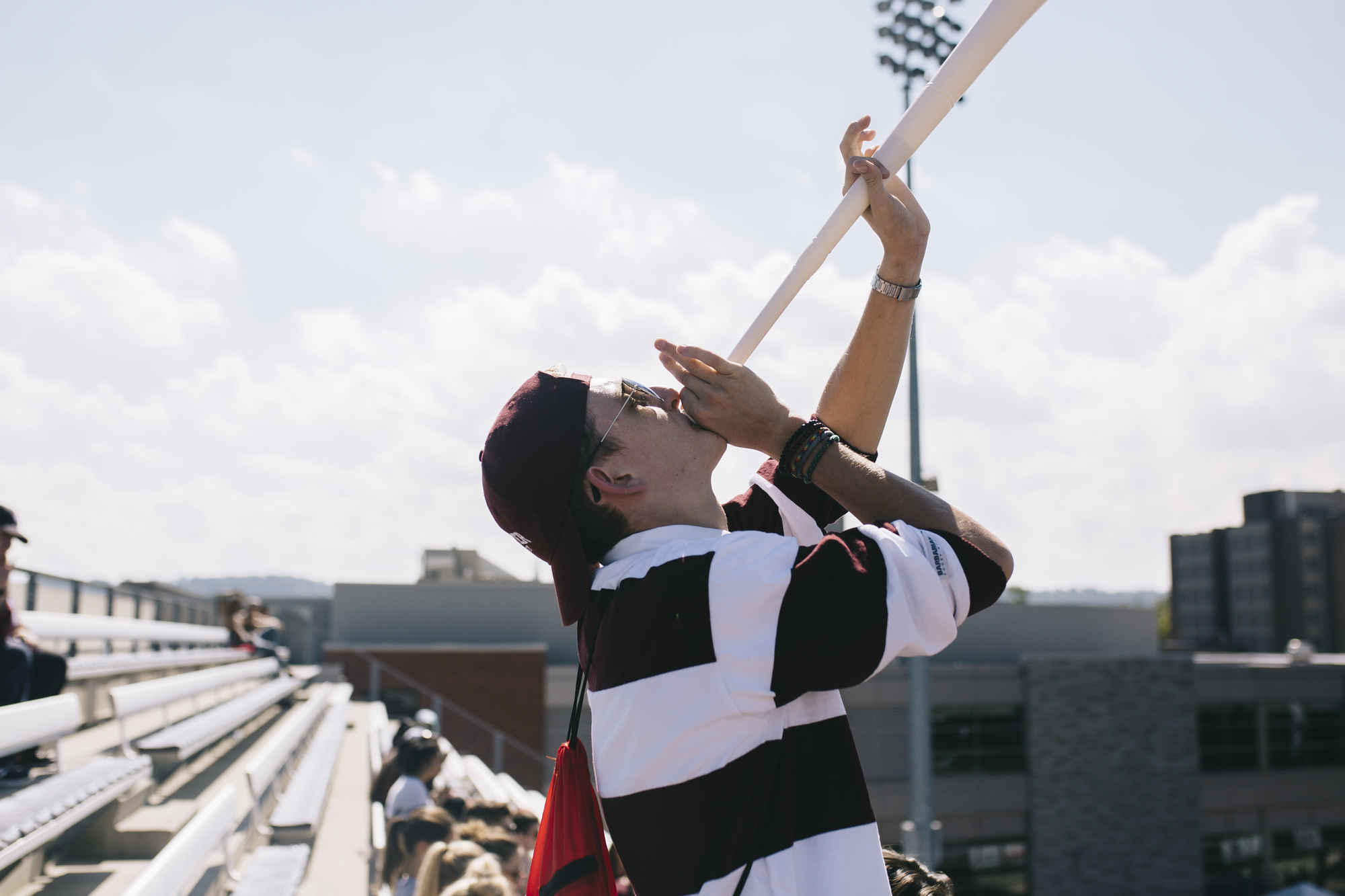 Like years past, the Marauder defense has been the reason McMaster has stayed in football games in 2018. Entering the week three tilt against the national #1 Western Mustangs, the Marauders defensive unit had allowed an average of 16.5 points per game and limited the opposition to 280 yards of offense per game. The game against Western is a bit of a stain to their overall performance, but a unit like this one is allowed a game or two like that per season, as the shutdown defense last year had a tough time against Laurier in their final tilt of the season. Even with the game against Western, McMaster’s defense has allowed an average of 20 points per game, good for third in the OUA, and 349.3 yards per game, second best in the OUA. 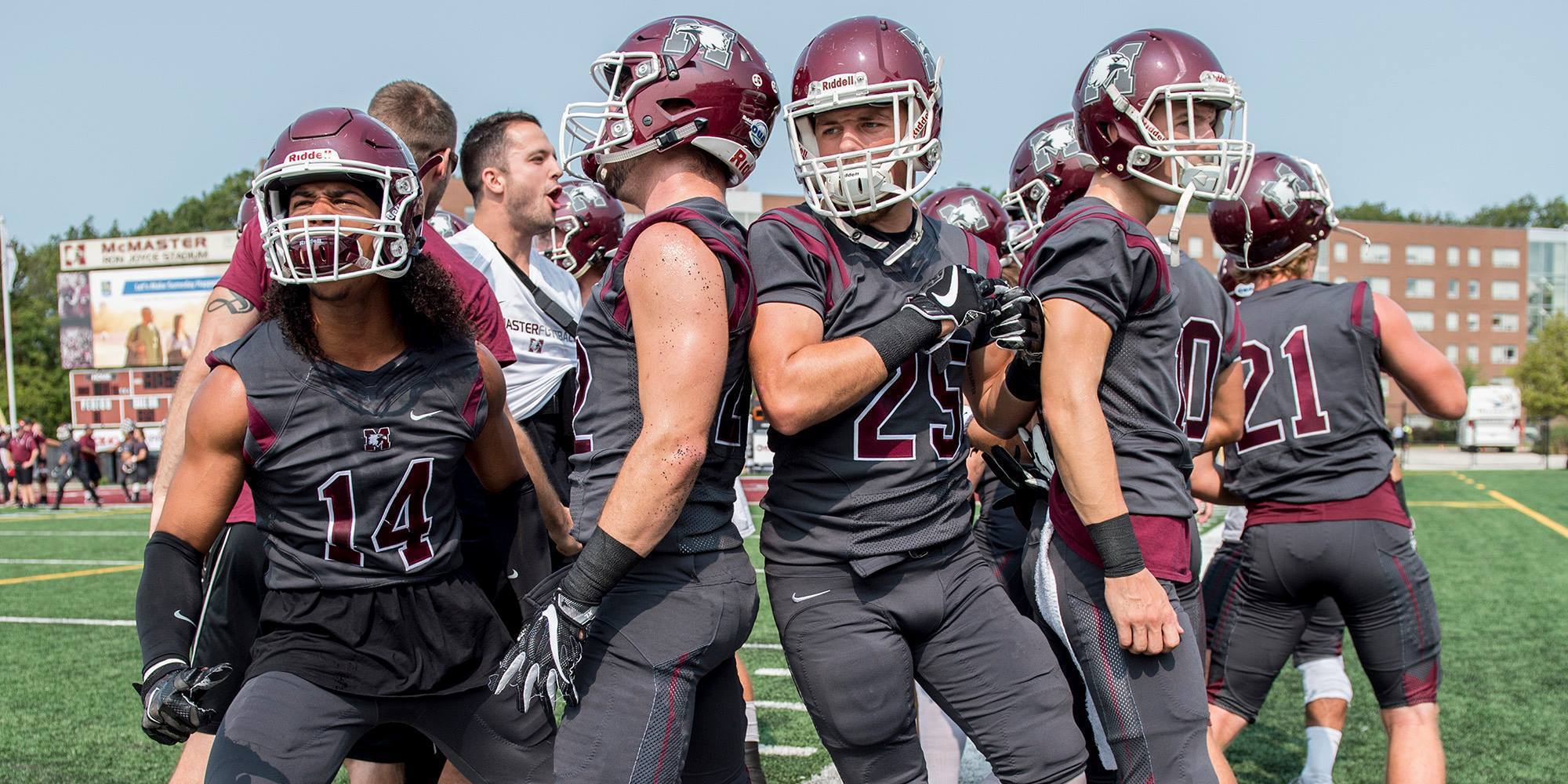 The secondary, led by Nolan Putt, has done a terrific job of keeping opposing passing games in check, having allowed the third least passing yards in the OUA, at only 213.8 yards per game. The secondary will be a big piece for the Marauder team in their week eight matchup against Waterloo, as the Warriors have the most offensive yards by air in the OUA.

The defensive front, while solid, has allowed 135.5 yards per game, sixth in the OUA. Senior linebacker Eric Blake, and Sophomore linebacker Nate Edwards, lead the team in tackles, with 42 between the two. The front did a great job in week one, against the top rushing team in the OUA, the Guelph Gryphons.

If the defense can continue to perform against teams such as Guelph and Ottawa, they will be a big assistance to the continuously developing offense, with some big games still to go this season. 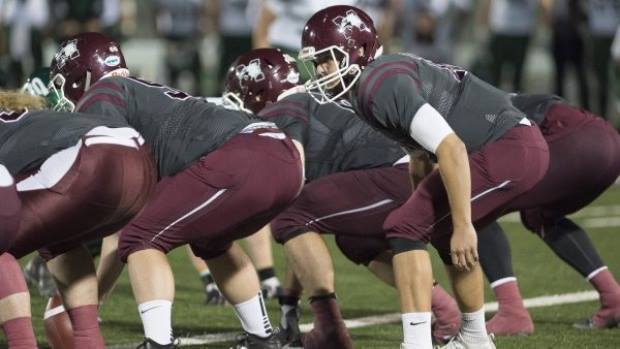 Third year kicker Adam Preocanin has been a lead point producer for Mac this year with the slow start by the offense. Preocanin has made 86% of his field goals this year, kicking 12 successfully on 14 attempts. His success this year will be needed down the stretch of the season, especially if the offense slows down.

The Marauders kick returners have combined for 239 total return yards, led by Mitch Garland with 99 yards on seven returns, and Esaie Mboko with 91 yards on three returns. On punt returns, they’ve only totalled for 127 yards, with Mitch Garland returning eight punts for 81 yards.