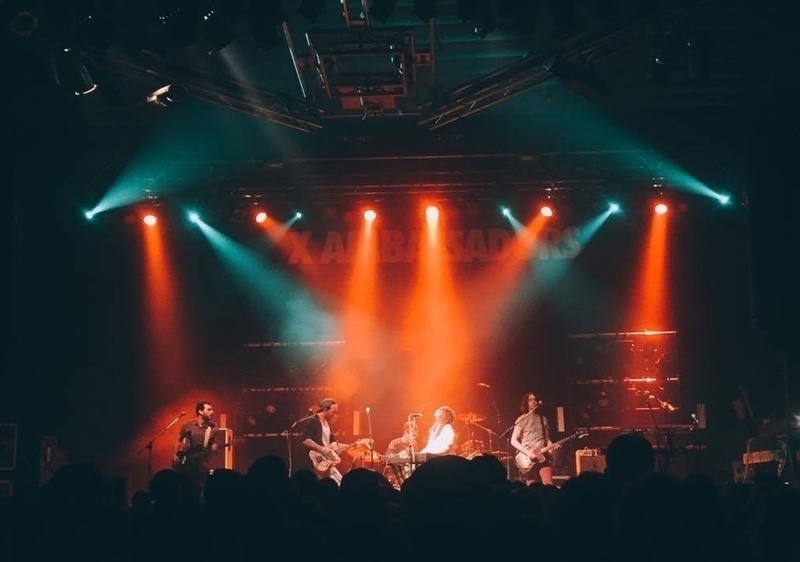 In November, we caught Savoir Adore open for pop rockers X Ambassadors at the Guelph Concert Theatre. After a bit of a communication mix-up with the guest list, the band had the door staff tell me “She says she’s on the guest list? We don’t have a guest list. That’s bold - let her in!” It was in this moment that I realized how cool this band really was. They had let some apparently desperate fan into their show, whom they had no idea was actually writing an article on them. Even though I promised my legitimacy with emails and business cards, it was pretty neat seeing a band open their doors quite so willingly to a nearly sold out show.

When the band hit the stage, they captivated the crowd early with a slow build but I assure you, if you were standing in that crowd and didn’t know who Savoir Adore was, you definitely did now. The 5 piece held electric vocals and smooth riffs in unison with a completely stellar group dynamic. Their power hits were lit up by smoke machines and the energy for the rest of the night had been set.

The band was doing more than just enticing the crowd to dance, as they directed their spotlight toward charities that may have taken a bit of a hit after the election in the United States. With an unhappy aura from the results, the band took initiative by collecting donations through their merch table for Planned Parenthood, ACLU and The Trevor Projects. Closing off the evening with Giants, arguably their biggest hit, this show set Savoir Adore up for what I can predict will be exponential successes here in Canada.

After attending the show, I had a chance to interview Paul Hammer and plead again that I hadn’t actually snuck into their show. We got down to the details of their Canadian tour and why being here across the border was such a nice break from their post-election sorrows.

They had made an ambient, electro song in French, so they decided to name their band after what was important to them...

To start I asked Paul where the name Savoir Adore came from, and he let me know, that it was created by necessity in the MySpace days, because they needed to share their music online. They had made an ambient, electro song in French, so they decided to name their band after what was important to them, knowing love, and translate it into French.

I asked him about their time touring with X Ambassadors. It turns out they’ve known each other for 8 or 9 years now, and played one of their first shows with them. Now that X Ambassadors have blown up, they have a chance to reach a bigger audience. They describe the band as down to earth, humble guys with a huge production, so it’s beautiful to tour with them. They explain how awesome it was to finally have a tour with some downtime for them to hang out!

Paul gave me some fun facts about new tracks on the new album: Mountain, the 3rd track was written by Lauren and himself for a different artist. They had sent it to him and he never responded, so they were like “hey - this works for us.” They fixed up the chorus and put it on the new record. With Giants, 90% of song written in

first night, and it took over a year to finish the chorus. This was the most pop song they had written so they wanted it to be perfect.

Lauren, their newest addition to the band has been an amazing asset as a writer and friend as Paul gushed on about their chemistry and friendship. It was natural for them to work together and he let us know that she probably wrote on close to half the record - woo, girl power!

When approached about the band’s overall Canadian experience he mentioned the classic Canadian stereotype about being polite and nice: turns out even our border crossing guards felt welcoming. Generosity was at a height for donations during their shows in regards to supporting charities that would help post-election blues. They raised over $1000 from 8 or 9 shows. We can also expect a project on the way with some potential merch auctioning! The band is active with social issues, but this election hit home for them and they’re trying their best to support organizations with the most vulnerable people who could come under attack during Trump’s presidency.

We concluded our chat with some laughs over their pre-show rituals. Turns out Savoir Adore starts their shows off with eating something as fast as possible, followed by a small shot of whiskey before they pop on stage… I’d say they’re starting on a good foot!

To hear Savoir Adore’s latest release, you can stream it online at Spotify here.