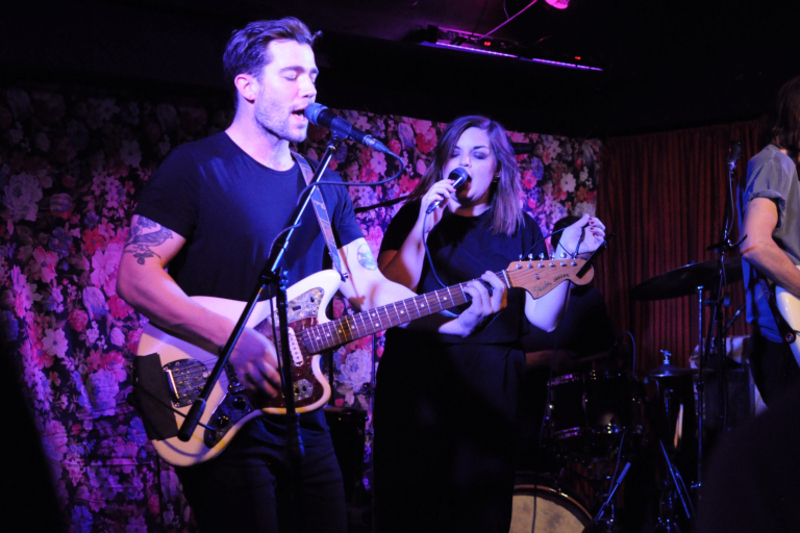 Earlier last week we heard Jamie interview Highs’ Doug Haynes on Watermelon Throwdown about their “most-to-coast tour” as they called it, where they were getting prepped to kick off their tour at the Casbah last Thursday. They’ll be heading from Ontario out west and then jetting all the way out to Europe for their first time touching base in Germany, France and a few other countries! The band is rolling out the record slowly by sharing piece by piece with North America and they’re excited to present the album in Europe for their December 2nd release.

Humbled by the exposure they chat about how the monetary value of it will never be as sweet as the impact of being heard on the radio where they’ve received some great spins over the past few months. A big part of their branding and message for this album had to do with the title Dazzle Camouflage which was historically a technique used in WWI where ships would be decorated with flashy and colourful designs in a way where they became blatantly visible yet somehow hiding their truth. This metaphor can be applied broadly to the themes of the album where putting something flashy forward that covers up the reality of who you truly are becomes relevant.

I was eager to catch the show on Thursday and pleased to be back in on of my favourite Hamilton venues, The Casbah! Starting off the night was Hamilton’s The Medicine Hat. Lead singer Nabi Sue Bersche stunned the crowd with a sparkly statement jacket instantly setting the tone for a celebration – an intimate crowd and a night of toe tapping tunes.

Bassist Elliot Gwynne’s shirt said it all: Hamilton is home...

Having the Hamilton experimental pop band set hometown air on fire with an honest and room-silencing tone was exactly what I hoped for when returning to the Casbah for the show. With toe-tapping riffs and smooth vocals, it was an absolute treat to see them perform again. With some fresh tunes and some older jams, the band’s electric guitar synths had me smiling from start to finish.

There’s something special about a band with a spotlight so evenly spread across all of it’s members as they worked in unison to create beautiful melodies. Chris Prude, Michael Boyd, Tyler Bersche, Elliot and Nabi Sue are a dynamic team and it shows. A beautiful Leonard Cohan toast had the entire room reminiscing to the fresh news for many of us. The Medicine Hat’s quaint charm and unapologetic quirkiness is exactly what stage presence should be about.

A phernomenal performance as Nabi Sue’s uncle would say himself.

Once Toronto’s Highs took the stage the floral backdrop came to life in accordance with their keyboard decal. There was a true theme surrounding their latest album Dazzle Camouflage as the album art came to life painted across the stage. But Highs didn’t hide away – their energy filled the stage spaciously while they paced around the stage and audience creating a comfortability and narrowing the distance between performer and audience. The introductions were short and sweet for this first night on their new tour as the electricity of their first few tracks had the crowd dancing almost instantly. Powerful and intricate guitar lines and a heavily passionate drummer had the music rushing through the airwaves and vibrating my beer bottle as I held it in my hand. The use of tambourines and shakers as drum sticks gave their percussiveness a unique twist with a triple threat vocal trio that blew the harmonies straight out of the venue.

Lead singer Doug Haynes still amazes me with his unprecedented range and the compatibility of his voice with keyboardist Karrie Douglas. Highs’ interaction with the audience made every audience member sing along and feel a part of the performance. Ending the evening off with her tambourine on her head, Karrie used the set and the crowd as a playful stomping ground to let her hair down and dance along with the beat. The energy of this band doesn’t get old and their talent is bound to fill venues all tour long. To catch one of their shows check out the dates below: