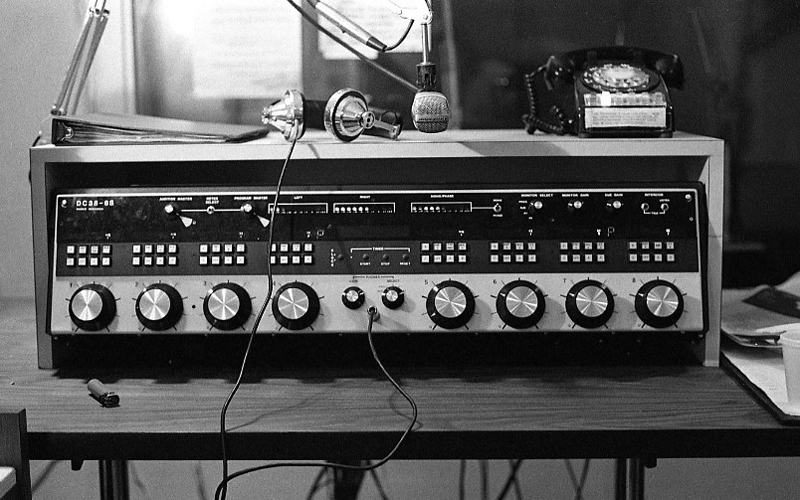 The idea of CFMU was hatched a decade earlier, in the mid-1960s, when students began a one-hour McMaster-themed program on 900 CHML. Years later, CFMU evolved into a “closed-circuit” radio station broadcasting to McMaster’s campus from the basement of Wentworth House. The signal was carried on the standard electrical wires in the walls of your residence room and you had to push your radio against the wall to hear anything. For real.

Years later, a group of dedicated and passionate students went through the painstaking application process for an FM broadcasting license, and raised the broadcast antenna on the roof of Brandon Hall. 93.3 CFMU FM – the media entity as it stands today – officially launched on Friday, January 13th, 1978.

Over the years, we’ve moved our transmitter a couple of times. Today it stands atop Mohawk College. We’ve moved our studios, too, from the environs of 301 Hamilton Hall to roomier digs in the basement of the McMaster University Student Centre. We’ve moved from analog to digital, replacing reel-to-reel tape with digital editing software. Our most recent move was from our outdated URL to cfmu.ca; home of our sharp new website. If you haven’t had a chance to check out cfmu.ca yet, you’re missing top of the line blog and video content, as well as live streaming and archived downloadable podcasts for both desktop and mobile.

Though, not everything at CFMU has changed over the years. We still have over 150 dedicated staff and volunteers and we still broadcast music and ideas that are either ahead of, or outside the scope of commercial radio. Campus radio pushes the limits of arts and entertainment. Many of your favourite artists that have just broken new ground, found their audience in campus and community stations around the world.  Our role as an alternative news source and a source for information pertaining to the Hamilton and McMaster community, is vital.

CFMU will celebrate it’s 40th over the course of the coming year. The first nod to our birthday will come next week when we launch From The Vaults, a series of high caliber interviews from both the recent and distant past. We’ll start with a rare interview between CFMU and the legendary Lou Reed.

Check out the new CFMU. Same as the old one, but better.