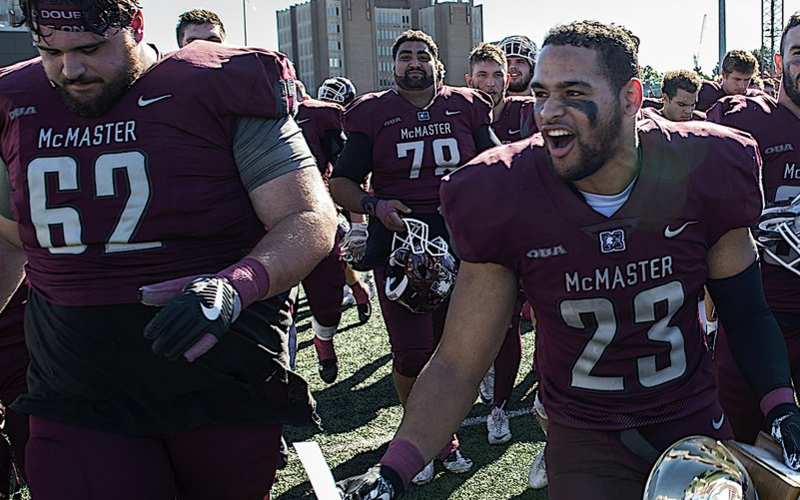 The Marauders went 6-2 to complete the regular season, losing to Laurier in their final game of the season, missing out on a bye directly to the OUA semi-final for the playoffs. This lead to a OUA quarter-final win over the Queen’s Gaels, and then another loss on the road to the Laurier Golden Hawks.

While they were still the focal point of the team, they could not get the job done in the big games; allowing 40 points against Laurier in the season finale. They did allow 19 in the OUA semi-final to Laurier, but they were strong and were the reason Mac only dropped that game by 13. Overall, they finished the regular season with 14.4 points allowed per game, which was good for second in the OUA, and were one of two teams who averaged less than 20 points allowed per game. They were also second in the OUA with 306.5 yards allowed per game in the regular season. They were an OUA best in passing yards allowed per game, with 185.6 yards, and forced the most turnovers in the province. Despite the drop in their grade, it was an outstanding year for the defense.

On the offensive side of the ball, it was a year to forget. In the first half of the season, I gave the offense a grade of B, because they had been good enough to win games, were young, and the run game was strong. This time around, I will give them a C+.

They were not good in the second half of the campaign, as they often played down to their competition, especially against Windsor. The offense was young, which is an upside for years to come, but it might have hurt them this year, as they simply could not support the contributions from the defense.

Part of this would come from the quarterback position. Greg Knox chose to go to Jackson White as the Marauders starter, competing with third year Dylan Astrom, and other freshman Andreas Dueck. White could not move the offense, as it was the running game that was often getting the job done in terms of getting the football down the field. Whether this was missing reads, errand passes, or not giving his receiver a chance for a gain after a catch, it was a tough year for Marauders quarterbacks. However, White still managed to grab an OUA All-Rookie position, along with Tommy Nield and offensive lineman Wyatt Edmonds.

On special teams, the Marauders received a weapon for kick and punt returns in the form of Justice Allin. Allin had 186 kick return yards, and was also an added speed-threat for the offense, as he had 208 total offensive yard game against Toronto. Allin was one of four Marauders to grab an OUA All-Rookie pot for 2017 season. Kicker Adam Preocanin had a tough year compared to his freshman year, where he was an OUA All-star and OUA Rookie of the year winner. This season he was 14-18 in the regular season, a rate of 77.8%, seventh in the OUA.

Defensively, the Marauders lose a few key players in the likes of Robbie Yochim, Mark Mackie, who was an OUA First Team All-Star, Jake Heathcote, Alec Robertson, Ben Megarry, and Michael Brouwers while Eric Mezzalira and Hassan Berry, who was also an OUA first team winner, are draft eligible but still have another year of eligibility.

The unit that was a very dominant force this past season will be a younger unit come 2018. However, the defense will still have big pieces such as Nolan Putt, Joe Bencze and Mac Bennyworth who will be returning for the 2018 season. While the defense likely will not be as dominant as 2017, they will still be very strong, while you still need to take into account the 2018 schedule and the recruits that come to McMaster.

Offensively, the tough 2017 season for the Marauders will turn out to be very beneficial for the 2018 season, as key parts of the 2017 offense such as Jackson White, Tyson Middlemost, Tommy Nield, Kyle Maertens and Justice Allin will all be returning after gaining very valuable game action this past season. Coach Greg Knox noted that the offensive unit was very young many times throughout the regular season.

However, the offense loses key pieces such as Cody Speller and Nick Firlit on the offensive line, as well as Mitch O’Connor as a wide-out. Dan Petermann is CFL draft eligible, but has another year of eligibility if he does not play there next year.