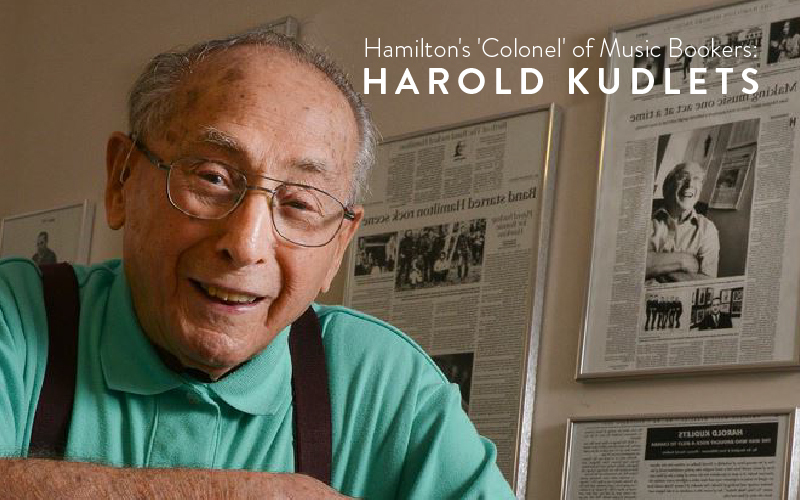 Harold Kudlets, affectionately nicknamed “Colonel” by one of his most well known associates, is a name that is probably recognized by only music industry insiders and a handful of music lovers and yet more than once in his long and illustrious life he changed the face of popular music, almost accidentally. In 1957, on the advice of another Harold, Harold Jenkins, later known by his stage name Conway Twitty, Kudlets booked Arkansas rockabilly fireball Ronnie Hawkins and his band into a Hamilton club. It was the birth of the Canadian rock and roll scene and it was through Hawkins that an unlikely group of musicians – Robbie Robertson, Rick Danko, Garth Hudson, Richard Manuel and Levon Helm became a band and later “The Band”. A few years later when that group of Hawks left Ronnie and headed out on their own Harold Kudlets handled their bookings and at one point booked them into a club called Tony Mart’s on the Jersey Shore in Atlantic City. Through a turn of events it was there they got a call from Bob Dylan asking them to be his backing band on a few upcoming dates. That of course led to two of the most famous and notorious tours in rock history and some much-celebrated basement recordings. Without Harold Kudlets the chance of those events transpiring would be mighty slim.

Harold Kudlets (actually born as Kudlats) passed away last year at Shalom Village in Hamilton just short of his 100th birthday. As an agent, manager and promoter he booked generations of Hamilton musicians into venues near and far. Born in Glasgow, Scotland Kudlets emigrated to Hamilton when he was 8 years old. He was a graduate of Westdale Collegiate and for a brief period an employee of Stelco. His first venture into running his own business came when he set up a hot dog stand on the Beach Strip. That business proved to be relatively short lived and Harold worked his way through several occupations. Before getting involved with the music business some of his first adventures as an entertainment promoter were in the sports world. In the days before professional baseball was integrated Kudlets was known for bringing teams from the Negro Baseball League, including the Cleveland Buckeyes and the Kansas City Monarchs with stars like Josh Gibson and Satchel Paige, to Hamilton’s Scott Park in the city’s east end.

His introduction to the world of music came about accidentally.

In 1947, while managing the Forum Palace roller rink on Barton Street he was approached by two men who had booked the venue for a concert with the Glenn Miller Band. After some negotiations, they turned the contract over to Kudlets and from that moment he never looked back. He was bitten by the show business bug like many before him. Using the Forum Palace as a base he brought many of the greatest stars of the big band era to Hamilton – Louis Armstrong, Benny Goodman, Tommy Dorsey, Gene Krupa and many more. In 1951 Duke Ellington opened the Dundas Arena for him.

Aside from larger venues Harold Kudlets dominated a thriving club scene in Hamilton that included The Flamingo, the Golden Rail, Fischer’s Hotel and the Grange. It was through clubs such as these that he introduced Canada to the world of rockabilly and rock and roll music. When approached with the idea of booking the young Conway Twitty (Harold Jenkins) into a few Canadian dates he decided to give it a go. In fact, Twitty’s great country standard “It’s Only Make Believe” was written in Hamilton during an extended stay while playing some dates for Kudlets. Following on his success booking Conway Twitty, Harold Kudlets introduced other acts from the American south to southern Ontario audiences including Ray Smith, Narvel Felts and Billy Lee Riley (of Sun records fame). At one point Conway recommended Ronnie Hawkins as a possible import and the rest, as they say, is history. Although the relationship did get off to a tenuous start, Kudlets had booked the band into the Golden Rail in Hamilton.

says Kudlets. “The Golden Rail was not used to that kind of thing. They were used to duos, solo pianists, lounge bands. They figured they wouldn’t be able to stand that kind of crap for a whole week.” Hawkins himself figured he was doomed to failure when he overheard the club’s owner telling Kudlets to “get that bunch of redneck hillbillies outta here.” Nevertheless, Ronnie enlisted the help of a Canadian friend, singer songwriter Dallas Harms who single handedly rounded up a crowd of local rockabilly fans to pack the place on the second night thereby salvaging the gig and Hawkins Canadian career. It was Hawkins who first gave Kudlets the nickname “Colonel”, after Elvis’s manager Colonel Tom Parker. It was also Hawkins who put together the disparate group of musicians who would one day be known simply as The Band, a group that in the late 1960’s turned attention away from the psychedelic indulgences of the era back towards the roots of American music – blues, country and gospel music.

Ronnie Hawkins and his Hawks dominated the Ontario club scene in the first part of the 1960’s thanks in large part to the efforts of Harold Kudlets. After time though disenchantment began to set in. Eventually the Hawks decided it was time to fly on their own. Of course, the man they turned to for guidance was their old friend, the “Colonel”. One summer morning in 1964 Kudlets arrived at his office in the Sheraton Connaught to find the Hawk-less Hawks waiting for him. They asked if he might take them on as an agent with the hope that they might continue to make the same kind of money as they had been making with Hawkins. Kudlets remembers, “When they told me what they had been making, I was shocked. I mean, Ronnie was the star of the show but I guess he squeezed the lemon a little too dry.” Harold agreed to become their agent booking them into venues on both sides of the border. One gig they played several times thanks to Kudlets was Tony Mart’s in Atlantic City, New Jersey. On one stint, there Levon Helm received a phone call from, of all people, Bob Dylan. On a recommendation from Albert Grossman’s secretary Mary Martin, who had seen the group at the Friars Club in Toronto, Dylan asked Levon if the group would back him for a gig at the Hollywood Bowl. After a pause Levon asked who else would be on the bill at such a prestigious venue and was shocked when the answer was “just us”. Nevertheless, he was still skeptical. “The phone call ended up with me telling Bob that we were real interested in the proposal,” recalled Helm, “that I’d talk to the other boys and get back to him the next day. Then I called the Colonel to see if Bob Dylan could actually sell out these places he was talking about. We’d heard him on the radio, but we didn’t have his records, so we had no idea how big Bob Dylan was. Colonel Kudlets assured us that Bob Dylan was indeed ‘big time’.” This of course led to a long and fruitful collaboration. The group backed Dylan on two important tours, the infamous “Dylan goes electric” tour of 1966 and the enormously successful “Before the Flood” tour of 1974. Of course, the informal “Basement Tapes” they recorded with Dylan have been credited as being the birth of the popular Americana movement music. All a chain reaction begun with the help of Harold Kudlets.

Over his long career, the number of musicians and venues Harold Kudlets worked with are way too numerous to mention. From his Harold Kudlets Agency office in the Connaught Hotel he booked more than local clubs. He also sent Canadian musicians as far afield as the world-famous Peppermint Lounge in New York City and The Freemont Hotel in Las Vegas among others. He also boasted of his ability to land his acts on some of the biggest television shows over the years – The Arthur Godfrey Show in the 50’s, American Bandstand in the 60’s, Ed Sullivan in the 70’s and David Letterman in the 80’s.

There aren’t many people in the music business that can look back with pride on a career that crossed paths with everyone from The Band and Conway Twitty to Tiny Tim and Bill Haley; from Nat King Cole and Billie Holiday to Chesty Morgan. Late in life Harold Kudlets was presented with a “Lifetime Achievement Award” at the Hamilton Music Awards. On hand to bestow the honour was Kudlet’s nephew, SCTV star Eugene Levy. It is no understatement to say that with the loss last year of “Colonel” Harold Kudlets after a long and eventful life we have truly seen the “end of an era” in Hamilton music.

Featured image via The Hamilton Spectator.