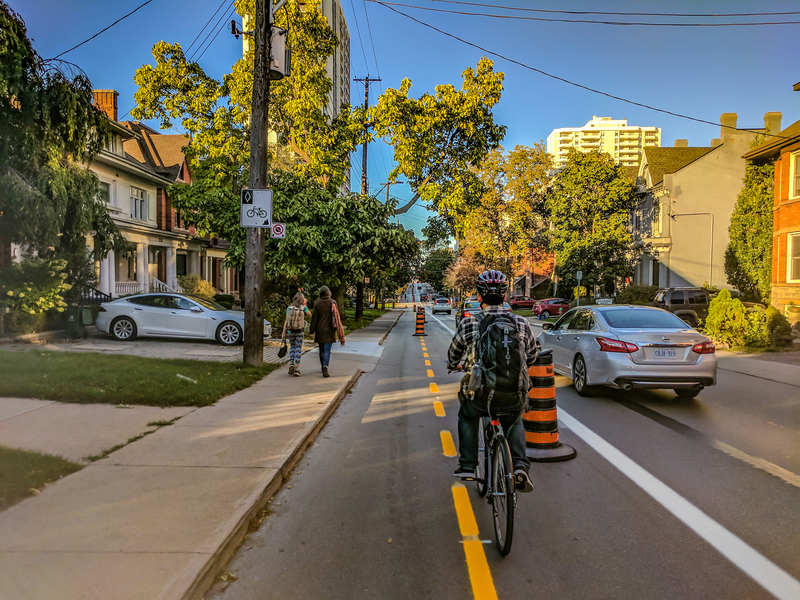 On October 27th Hamilton opened the latest addition to its cycling infrastructure, the Bay Street bike lanes. This central, north-south route in the downtown was desperately needed as it crosses and connects a series of bike lanes and cycle tracks that run east to west throughout the area. Riders have been calling for more bike lanes to bring us closer to a minimum grid. This would stop the need for people to decide between excessive detours to cycle along safe routes, or trying to charge, Furiosa style, down roads like Queen or James with fast and heavy traffic.

Bay Street incorporates three different forms of design. Starting in the South, from Aberdeen Ave to Hunter Street, the route takes the form of an unprotected two-way cycle track. Once it crosses the Hunter Street cycle track the lanes are “protected” by bollards (plastic tubes sticking out of the ground) and some rubber curbing in a small buffer zone between traffic. Once the lane reaches the Cannon Cycle Track, route separates into the standard unprotected bikes lanes on either side of the road. 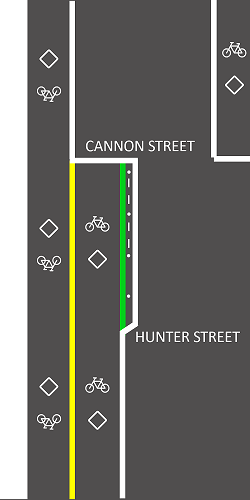 Bay Street takes home two really big wins regarding its design. The first is that it has become the only dedicated cycling route to go continuously from an arm’s length of the escarpment to within eyeshot of the water. The second is in how it deals with crossing the two busiest roads in Hamilton. By putting bollards up around the Main Street corner the lanes are more protected from drivers cutting corners onto Bay. Drivers will also no longer be able to take left turns from Main Street on a red light, it adds an additional protection for those on bikes. When crossing King Street, an intersection that sees a lot of vehicles turn from Bay Street across what is now a cycle track, prioritized signalling allows these two groups to each have some travel time to themselves.

What Bay Street lacks is protection. A feeling of safety is the key factor for the majority of "would-be" bike riders; everyday people who are open to using cycling infrastructure daily but don’t feel safe with what exists. When you look at the role models for cycling infrastructure design, even in North America, where we have plastic knockdown sticks with one foot wide concrete barriers. Two-thirds of this route doesn’t have anything more to protect a rider from two tonnes of metal moving at over 50 km/h than a couple lines of paint. The lack of physical barriers doesn’t just hinder potential riders, it results in other problems for the willing. All you have to do is search #blockedinhamont for a collage of posts with postal vans, delivery trucks, and even personal vehicles parked in the one week old Bay Street bike lane. At the ribbon-cutting ceremony, a Canada Post van drove over the rubber curbing and parked in the bike lane so close to the podium it was in some of the photo-op pictures.

The positive thing about unprotected bike lanes is that they can usually be upgraded with barriers down the road. Bay Street is going to be a major improvement for most who cycle in this part of the city and will likely work to increase the number of overall riders, taking cars off the road and creating a healthier community. The key will be for the city to aggressively push ahead towards a minimum grid by forging new bike lanes that span meaningful distances and connecting the disjointed segments that currently exist.