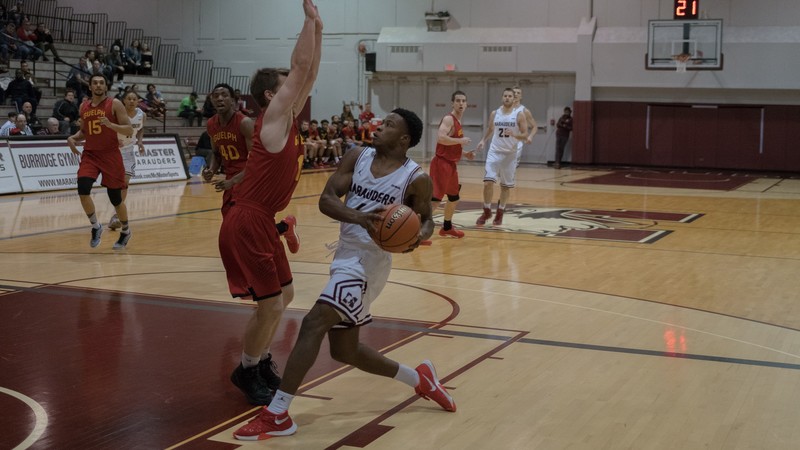 Well, week one is in the books for both of your McMaster Basketball teams, as both played host to opening contests last Wednesday night at the friendly confines of Burridge Gym. Here is what you might have missed from the early action, and what to look for as the season continues.

The women played host to the Guelph Gryphons on Wednesday night in their first competitive test of the 2017-18 campaign and they faired rather well, picking up a 70-61 victory. McMaster was able to take advantage of the Gryphons slow offense, as Guelph shot just shy of 30% from the field, while Mac shot 37.3%. Both teams committed 19 turnovers, but a 15 point effort from Hilary Hanaka, 14 points from Olivia Wilson, and 13 points from Linnaea Harper helped the Marauders pull through in what was a sloppy first game of the season for both sides.

The women lost a home preseason tilt to the defending National Champions, McGill Martlets, by a score line of 70-59. In the loss, the women played what will likely be their permanent starting five of Hilary Hanaka, Erin Burns, Jelena Mamic, Linnaea Harper and Olivia Wilson. Hilary Hanaka and Harper combined for 33 points in the game, while Julia Hanaka, younger sister of Hilary, came off the bench for 16 minutes, adding 16 points.

The Lady Marauders took to the court at the Darcel Wright Memorial  Tournament for some final preseason action as they won their quarterfinal against the New Brunswick Varsity Reds 81-64, then defeated the host Ryerson Rams 68-58 in the semi-final, and were able to win the tournament with a 59-47 victory over the Saskatchewan Huskies. Hilary Hanaka had 47 points combined in the tournament.

It is no secret that the women are going to rely on their veteran experience for success this season. Three of the five starters are in their fourth year of eligibility, with Olivia Wilson and Jelena Mamic being the two outliers, in their second and third years respectively.

Hilary Hanaka and Linnaea Harper are going to have to carry much of the load offensively for the Marauders, however, Julia Hanaka coming off the bench for the women will be a key source of offense for the team throughout the season, as she will carry the load when the starters are in need of rest. The Hanaka sisters will be able to take over for what National Player of the Year Danielle Boiago leaves behind, as she graduated and went pro in the Netherlands.

For more on the Women's success in the preseason, visit Usports.ca.

The men began their season immediately after the women finished their matchup, as the men also took on the Gryphons from Guelph. In what was a very tight contest, the men were able to come out with a 84-79 win. The Marauders had five players with 12 or more points, including Miles Seward who led with 23 points. Mac was only able to shoot 37.2%, but were able to rely on clutch shooting and good clock management down the stretch.

The men did not have the same success that women had in preseason, as they went 3-4 in the contests. They saw their wins come in home games against UBC Okanagan, as they took that 72-68 in overtime, and beat Memorial two days later by a 92-77 score line. They finished their preseason with a 77-75 win over St. Mary's at Burridge Gym.

They lost a home game to the Laval Rouge et Or, 103-63, then left their tournament at the University of Calgary winless, after hard-fought contests against Acadia, McGill and the host Calgary Dinos.

Miles Seward had a combined 38 points in the contests against UBCO and Memorial, while Matt Quiring had 40 combined in the three preseason victories.

The rotation for the men will be interesting this year, as you will likely see a number of players getting more than 10 minutes a game each, as Patrick Tatham looks to find his regulars while putting use to all his resources in his first campaign as head coach of the Marauders.

Look for an early starting five along the lines of David McCulloch, Miles Seward, Sasha Simic, Andre Toic and Matt Quiring. With a relatively young team, Coach Tatham will be looking at a number of options to carry the load for this season, but the trio of Miles Seward, David McCulloch and Matt Quiring will likely be the Marauders to shoulder the teams scoring this year, as Quiring and Seward enter their third year, and McCulloch going to his fourth.

Tickets can be had on Marauders.ca along with information on both the Men's and Women's teams.