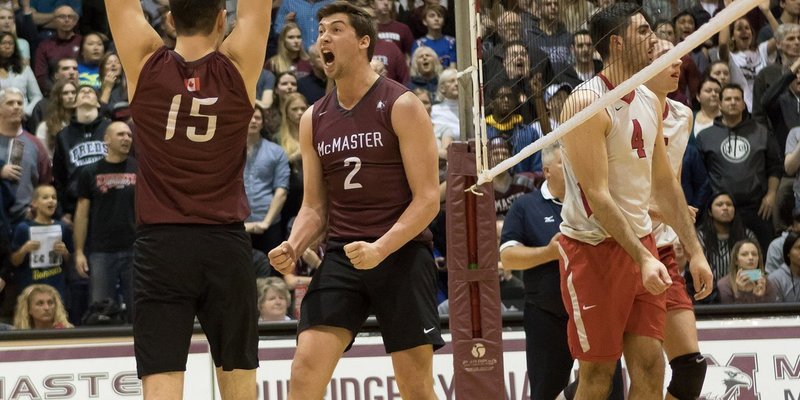 Once again, the McMaster Men's Volleyball team will be inviting their cross-border rivals, The Ohio State Buckeyes, to Burridge Gym on October 21st and 22nd for another installment of the North American Challenge presented by Nike. Here's all you need to know leading up to the preseason contests.

A bit of context:

These two matches will be the 6th and 7th time that these powerhouse teams will face off since 2014, where the Marauders made the trip to Columbus, Ohio to take on the Bucks at St. John Arena. The Marauders currently lead the all-time series with three wins and two losses, dropping only the inaugural two matches that were played in Columbus.

The most recent matchup saw the Buckeyes come to Burridge Gym last December, where the McMaster faithful packed the 2250 seat venue to capacity, to watch the Canadian side sweep the Bucks 3-0 (25-23, 25-26, 32-30). McMaster went on to a perfect regular season record, 17-0, and won bronze at the U-Sports Championship in Edmonton. Ohio State, despite the loss, went 31-3 and won the NCAA National Championship.

Entering his 33rd season in charge of the Buckeyes, Pete Hanson boasts an all time record of 677-335, while securing three national championships in 2011, 2016 and 2017, adding another four National Coach of the year awards. Looking to defend their National Championship crown, the Buckeyes have a very scary, but entertaining squad this campaign.

This year's buckeyes team will be lead by senior outside hitter Nicolas Szersen. With the loss of Miles Johnson due to graduation, Szersen will be expected to pick up a large weight of the scoring for Ohio State, as he and Johnson split most of it last year. The native of Conflans Ste Hne, France, had an impressive 10 kills while playing all three sets in last year's match. The 6'4 Frenchman has built up quite the resume while playing in Columbus, winning Midwestern Intercollegiate Volleyball Association (MIVA) freshman of the year, 9x MIVA player of the week, NCAA all tournament team in OSU's two national championship years, and NCAA tournament most outstanding player, and MIVA player of the year in 2016 and 2017. Szersen enters the season ranked top-20 all time in ten different categories at Ohio State including first in services aces.

Another key player to Ohio State defending their national title in 2018 is junior middle blocker Blake Leeson. In the December contest at Burridge, Leeson had five kills, with another two solo blocks and two assisted blocks. the 6 foot 7 native of Mequon, Wisconsin enters the new campaign tied 17th in school history with 139 solo blocks and returns from representing team USA at the World University Games this past summer. He also adds to NCAA all tournament team honours in the two national championship winning campaigns.

Leading the Marauders into the 2018 campaign, Dave Preston enters his 16th season in charge of the Mac men. With an all-time conference record of 232-57 while at the helm with Mac, he has captured eight OUA titles, winning the last five. The teams best finish nationally is second but they look to make that first at this year's National Championship taking place in Hamilton. Preston has also won four OUA coach of the year awards, while adding three CIS/U-sports coach of the year awards.

Going into 2017-18, the Marauders will look to extend their OUA title streak to six straight, while trying to add their first national title in the school's history, while doing so with a younger team than years previous.

The team will be led by fifth year outside hitter Brandon Koppers. Sharing much of the load with now graduated Danny Demyanenko in last year's campaign, Koppers had a team best 160 kills, while averaging 3.08 kills per set. Overall, he contributed 208 total points for the Marauders in 2016-17. In the most recent matchup against Ohio State, he had four kills, and an assisted block. He has received First-Team OUA West honours, OUA Second- team, and OUA All-Rookie team.

Andrew Richards, the fourth year outside hitter will also be a key piece of McMaster's puzzle for this season. The Canadian Junior national, Richards had only one and a half points against Ohio State in last years contest, but has been a key depth piece in the teams OUA title streak. With the loss of Andrew Kocur to graduation, Richards will likely be seeing more floor time. Richards, not being the tallest of outsides, at only 6 foot 3, he is very consistent on his attack success at the net when the set is towards him. Last season he had 48 total kills on 130 total attempts. He is also a very good hustle player, with a 2.09 digs per set average, and 212 assist, second on the 2016-17 Marauders squad.

Tickets are now on sale for this exciting event on Marauders.ca, where the first match goes Saturday October 21st, beginning at 7pm, and the second match goes the following afternoon at 2pm.