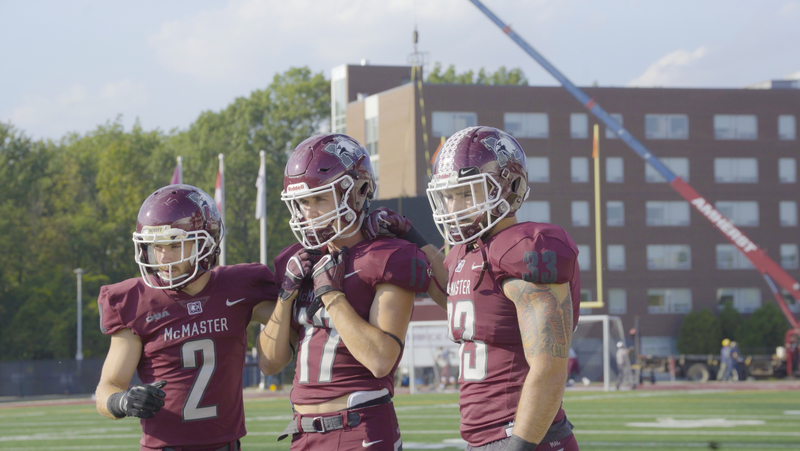 Halfway through the season, your McMaster Marauders football team has a stellar 3-1 record.  This puts them in fifth in the OUA, and nationally ranked in the U-Sports polls at No. 7. Western and Laurier are the only two Ontario teams ahead of the in the national standings.

So far, our offence been alright, but nothing more or less than that. However, considering how young this offensive unit is, it is nothing to gawk at.

The run game has been the biggest success for the offense. Averaging 134 rushing yards a game, especially in Canadian football, is definitely  a weapon to have. Out of the eleven touchdowns Mac has had to this point, five of them have come on the ground. The offense also contains a number of running threats outside of just running backs, which is an asset.

It’s a good thing our run game has been strong, because passing has not been up to par.  A team that averaged about 252 yards a game in the air, has averaged at 166.8 this year and has yet to throw for 300 in a game. While the Quarterback position has been a bit up for grabs, it is possible that the offense has found there starter in freshmen Jackson White. Both QB's beneath him, third year Dylan Astrom and freshmen Andreas Dueck, have shown they are more than capable to be starting as well. At this point, it is all about consistency and sticking to the game plan. Now is the time to smooth things out when the going gets tough.

Lyons has been the leading rusher for the Marauders this season, logging 278 rushing yards on 68 carries, adding on two touchdowns, as well as 41 receiving yards on 4 receptions. Lyons showed last year that he can be a solid starting running back on this offense, and in the OUA. This offense would love to see Lyons continue the season he is having down the stretch, and into the playoffs.

Nield has been a bright spot in the struggling passing offense, racking up 12 catches for 176 yards, and three touchdowns, all in a rookie campaign. He will continue to be a target for whoever is behind centre for the Marauders, not just for this season, but for the next few seasons to come.

The veteran offensive threat was expected to help this young offense adapt and grow, and he has done a great job of that thus far. Bringing in 18 balls thrown to him, for 156 yards. The offense will benefit greatly from any contributions Petermann can provide for the remainder of the season.

Coming into the campaign, McMaster's defense was expected to be one of the best, if not the best, in the nation. So far they have definitely lived up to that hype. The only thing that can really be said that needs improvement is the discipline, and trying to limit their penalties. They currently average 12.5 penalties a game, for an average of 109.8 yards a game, which are both second highest in the OUA, behind only Carleton.

In the three contests the Marauders have won this season, the defense has not allowed a touchdown. Pretty scary stuff for any opposing team, and frankly I can see that mark standing after this weekend's game against York. Including the lone loss to Western, the D allowed a touchdown on the ground and one in the air, with two field goals being added on. The other 9 points the Mustangs put on the board were by way of a safety and a fumble recovery for a touchdown.

If the defense continues to perform this way, against marquee opponents, they can push us through the playoffs, considering they are responsible for 38 of the allowed 54 points against this season, a points responsible for average of 9.5 a game.

Yochim has a total of 21 tackles this season, 18 for, and 6 assisted. He has also added 2 interceptions, for  55 yards in returns, one of which was for a TD and another 4 breakups. He continues to be a defensive back who can match up against an oppositions top receiver and cause havoc for both the Quarter back and wideout. He has also shown to be a threat on special teams with 71 punt return yards on 7 attempts.

Mezzalira has made it a nightmare for opposing offense to move the ball this year, with 27 total tackles, three of which were tackles for a loss. He has had a very important veteran presence for the defense this year, and will be a huge part of the unit down the stretch.

Putt has a total of 14 tackles this season, but his largest contribution would be when the ball is in the air, where he has 3 picks for 99 return yards, as well as a pass breakup. Much like Yochim, Putt has shown to be a top defensive back both in Ontario and the nation, and causes fits for the thrower and receivers that go up against him.

Mackie was expected to be a large piece of the defense this year and has done just that, putting up 15 tackles, 2 of which were sacks, and 8 for a loss, as well as 1 fumble recovery.

The special teams this year, led by kicker Adam Preocanin, done a solid job helping the defense, by stopping opposing returners, and making opposing offenses start in unfavourable positions. They have also been able to help the offense when they are struggling to move the ball.

Preo has converted on 10/11 extra points this year, and has added two field goals. He is also averaging a stellar 39.4 yards per punt and 55.2 yards per kickoff.

Allin has returned 9 kickoffs this year for a total of 168 yards, doing his all to contribute to the offense by setting them up for the best field position possible to begin drives.

Get out to support your Marauders this Saturday at the annual Homecoming football game! Tickets are still available for both students and the public over at McMaster Athletics. Also don't miss your chance to hear the talent of Lil Yatchy on Friday night, and The Strumbellas accompanied by Said the Whale on Saturday night. You can grab your tickets via MSU Campus Events here. The Homecoming Expo is back this year in BSB lawn Friday afternoon between 11am-3pm.