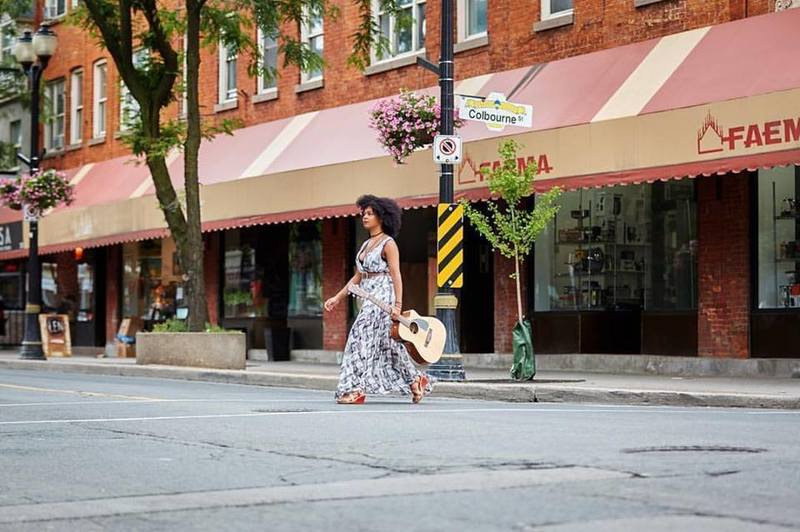 Hamilton's vibrant music scene is the area's worst kept secret, but some parts of the scene have been richer than others. Our punk and folk scenes have always been very strong, for example; we have a good hip-hop scene and an excellent electronic/DJ scene. One area that's been slower to grow has been the R&B singer/songwriter scene. The Hamilton music scene could be more diverse and representative of different backgrounds and experiences overall, which is why seeing an artist like Shanika Maria enter the scene has been so exciting.

Shanika Maria grew up in Stoney Creek and went to Orchard Park high school (shout out to O.P.) This young Hamiltonian has burst on to the scene with the release of her EP "Childish Games" and, after a few local shows, the buzz around her has started to grow. Shanika Maria is a strong songwriter and her lovely sound is something Hamilton has been needing. We sat down with Shanika to learn more about her and her music.

BN: Can you tell us a little bit about how you got into music and what lead to the recording of your EP?

SM: Since I was young, I was always singing and writing, but I never thought it was a realistic thing I could do. When I was in high school, I used to record really shitty cover videos with my webcam and upload them onto Youtube. That was pretty fun, but it made me super anxious to put stuff onto the internet to be judged. I did that off and on for a couple years. Then when I was at Humber, a friend of a friend had showed one of my covers to this band that was looking for a backup vocalist and I started performing with them. That's when I really realized that I liked performing and doing music, but performing someone else's music wasn't personal enough for me. I was always writing and started performing solo here and there and entered a songwriting competition through Durham college. I ended up winning the competition and got to record an EP with their student run label, which unfortunately, didn't turn into much of anything that I felt comfortable releasing. Around that time I met Kojo Damptey and he kept asking me when I was going release an EP. Now a couple years later, with his help, I've finally been able to do so. It's been a long whirlwind of a process, but happy with the end result.

BN: What's it like working with local musicians Kojo Damptney and Aaron Hutchinson?

SM: It's really cool working with Kojo. He really takes on a mentorship role with me. I often feel like this wide eyed newbie and he's super patient with lots of insight into what I need to be doing on the business end of creating and putting out music.

Aaron was great to work with, super professional and all around cool guy. I really liked his interpretation of my songs, especially on Childish Games and Mouth Eaters. I think he really understood what I wanted to do with those songs and took them to another level.

BN: Can you tell us a little bit about your song-writing process?

SM: I think writing has been a method to process things I encounter in life or topics I find hard to vocalize. I cycle between being super shy, to really outgoing. Writing music was that method to tap into those conversations I would typically shy away from. I get inspired by everything: conversations, film/music, people watching, moods/states. I tend to focus my lyrics on strained relationships between people or the self, sometimes leading to happy ending sometimes, not so much.

SM: I'm very mood oriented when it comes to music. I could be cleaning listening to classical/ambient/experimental stuff, or in the gym listening to something like kpop/ hiphop. I don't really limit myself to one genre. I've been listening to a lot of Motown (Marvin Gaye, my favourite) and jazz.

BN: What do you think about the Hamilton music scene and what's it been like for you as a new artist in this city?

BN: What do you have planned for the fall, music wise?

SM: I have a couple potential shows for September and October, nothing concrete as of yet.