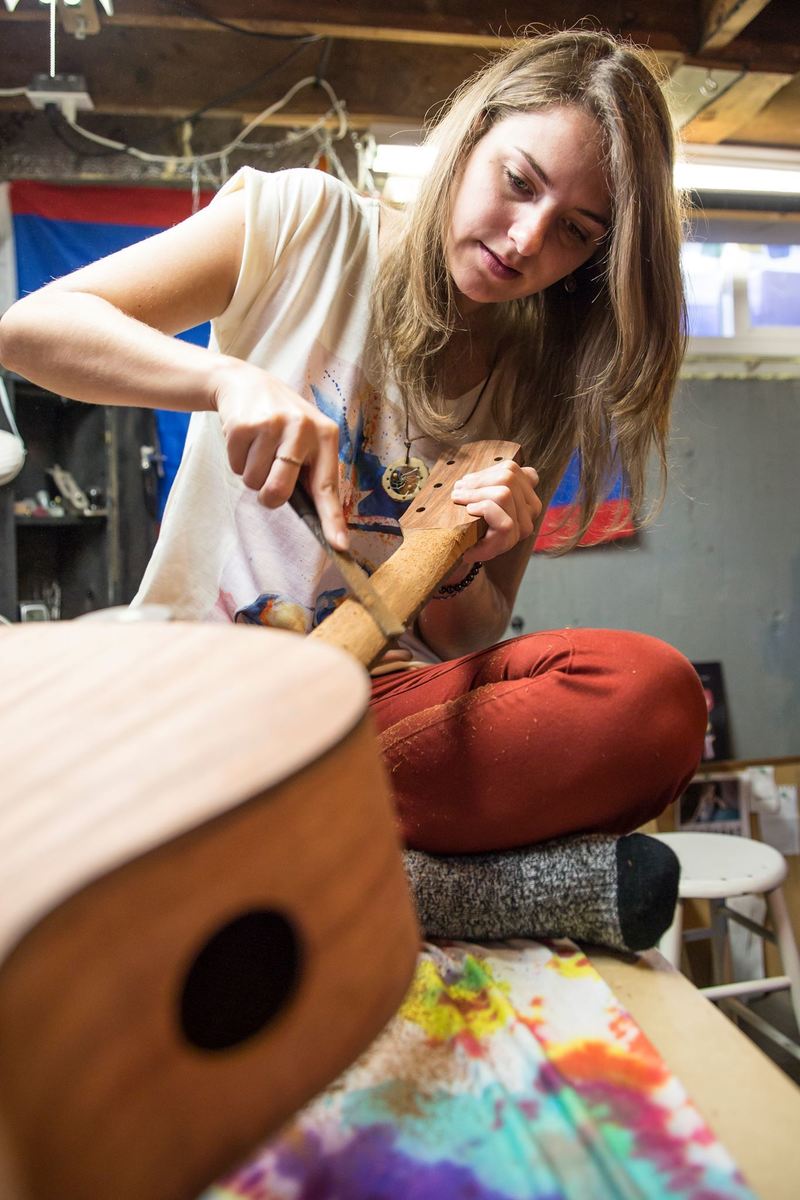 A broken guitar prompted a career change for Ashley Rowley. Since then she has worked as a guitar teacher by day and a luthier by night. After leaving school, Rowley has moved on from studying classical guitars to making them. Through mentorship, patience, and a lot of sanding, Rowley is able craft the instrument she loves. Rowley describes the painstaking craftsmanship, her creative choices, and lessons learned about networking as an independent artisan.

While studying classical guitar at Mohawk College, the Burlington native met Paul Saunders. Inspired by the luthier’s workshop and motivated by her dissatisfaction with her chosen program, Rowley made the jump from performance to craftsmanship.

“I begged him” Rowley says of her mentor Saunders, “I think I went back to him so many times that he finally gave in [and agreed to teach me].” Rowley then spent the next few years learning, and then perfecting her craft. Making a guitar requires a significant time commitment, which when coupled with learning the craft, becomes an onerous process.

“[Making a guitar can take] 200 to 250 [hours], depending on what you’re doing. It’s a long time so when you have a full time job, like teaching [music] like I do, it can take a year to make a guitar, non-stop, all my extra time. Plus it takes longer when you’re learning.”

Rowley says the most important lesson she learned from Saunders was patience. She credits her mentor and friend with “[teaching her] everything,” saying without him she “would not be anywhere close to where [she] is today.”

Now that she is creating guitars professionally, Rowley gives insight into the process of a guitar luthier, which she admits comes with a lot of sanding.

“My right arm muscle is way bigger than my left.” Aside from the creative choices she gets to make, Rowley describes rounds of sanding, taping, and more sanding that eventually results in a finished instrument. Rowley does offer some comfort for any prospective luthier that may be intimidated by the painstaking process, “everything gets easier with time, and it becomes more fun over time too because you’re not learning everything anymore, you’re perfecting it.”

Reflecting on the business side of being an artisan, Rowley opens up about the lessons she has learned about networking and the success she has had through collaboration.

In early 2016 Rowley gave one of her handcrafted guitars to Canadian singer/songwriter Lights. The guitar itself Rowley says was “visually really cool—it looked like everything [she] wanted it to look like.” The gift-giving itself was different than Rowley had anticipated, “I made a video and told her that I had a guitar [to give to her].” After a few months Lights’ manager saw it and contacted Rowley. They later met in person and Rowley gifted her the guitar; Lights hasn’t used it publicly since.

“I really did think that it would go a different way,” Rowley reflects, “ I kind of just took it with a grain of salt. I knew going into this that she may not ever use it; I didn’t ask her if she wanted it.” Still, Rowley admits she is proud of herself for making the guitar.

In May of this year Rowley attempted another promotional deal, this time with another Canadian singer/songwriter Terra Lightfoot.

"[Working with] Terra Lightfoot obviously worked out very well… she absolutely loves it… [It] was a different process, I told her that I wanted to collaborate with her from the very beginning and she was over the moon about it.”

Terra Lightfoot posted on her instagram about the custom guitar saying, “[Ashley] hand carved the most beautiful inlays of spruce trees, a moon and seven stars, and on the back of the guitar she inlayed a star in the exact shape of one of my tattoos. I was in tears when I picked it up from her today. She’s a wonderful human and has created an instrument that will last me a lifetime.”

Overall, Rowley has learned that the collaboration with the person ordering the guitar is one of her favourite parts of the process. Describing another custom guitar she says, “it was perfect for him and that makes that person really love the guitar even more because it makes it personal to them. So whatever is personal to them turns into being personal to me because I come up with it and create it.”