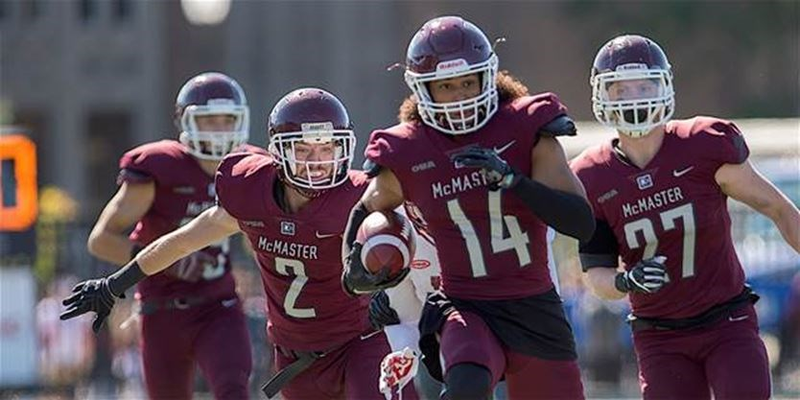 Last Thursday, the OUA unveiled the 2018 Football schedule for all teams. We will look at the strength of the schedule compared to last season, as well as the pros and cons of the fixture list.

Right off the bat, the Marauders will host the Guelph Gryphons on August 26th. Not an easy way to start the season, however, over the last two years, Mac has had the Gryphons number, as they have won the last three matchups against them, including at Guelph’s homecoming this past season.

Mac will then have two tough road trips for weeks two and three, as they travel to Ottawa to face the Gee-Gees, then to London for a showdown with the defending Vanier Cup Champions Western Mustangs. McMaster got the best of the Gee-Gees this past season at home, but the last time Mac went to Ottawa, they were dealt a 30-8 loss. Not much to say about Western, as most people know by now what they are capable of, at home or on the road.

From week four to week seven, the Marauders will play the remainder of their home games, as well as a week 6 bye. Week four will see the Toronto Varsity Blues visit Ron Joyce Stadium, a game that Mac should have no problem with, as they went to Toronto this past season and walked away with a 43-6 win. Week five will see the Wilfrid Laurier Golden Hawks come to Hamilton; a team which has had similar numbers as McMaster for the last three seasons at least, ever since Laurier upset McMaster at Ron Joyce in the 2015 OUA Quarter-final. McMaster also saw their Vanier Cup hopes end at Laurier this past November. After their bye week, they will welcome the Queen’s Gaels to Hamilton, for a rematch of this seasons OUA Quarter-final, which McMaster narrowly came out on top with 12-9.

Mac will finish their season with two away games, where they will go to Waterloo, a team who was decent this season compared to past seasons since their program returned from suspension in 2011. They will go to Windsor for the final week of the season to take on the Lancers, who were bottom of the OUA this past season, as McMaster picked up a win at home over the Lancers this season.

The story of this schedule would be two long distance road trips, to Windsor and Ottawa. Despite both games being against teams that Mac should beat, they long travel distance is never easy on university athletes.

A positive aspect of the schedule for the Marauders is the ability to prove themselves against a solid opponent right at the start of the season. Playing a team such as Guelph, who hasn’t been themselves the past two seasons, but are still a quality team in the conference, makes for a great test for any new Marauder players. The three home games in a row will also allow Mac to makeup for any lost ground in the two-week road trip they embark on before those three games at the friendly confines of Ron Joyce Stadium.

The combined record of their opponents in the past season was 34-30, with an average opponent record of 4-4. Overall, Mac should not have any overly difficult time this season, but definitely will have their challenges.